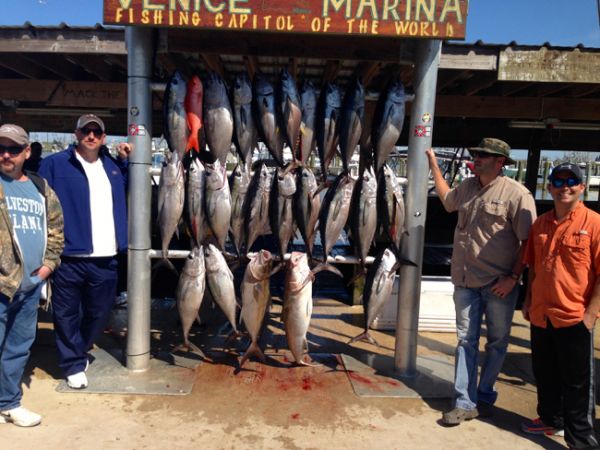 The offshore fishing over the past few weeks has been good. The weather which can go either way this time of the year turned out to be excellent again for the most part, about the same as 2014. A lot of calm days, but with that of course came the fog from the river, which makes navigation a little tricky some mornings. The offshore fishing was a little tough for about a week but it turned right back this past weekend. Capt. Scott had the Gordon crew from Richmond, Tx. They had a great day catching about 20 black fin tuna, 1 Yellow fin, and a handful of Amberjack. They didn’t have to run far offshore at all so that made it even better. The fishing on Sunday was a little different mainly because of the forecasted 1-2ft. seas being more like 3-5’s. We had the Eslicker crew from Oklahoma and Maine, and some locals from Baton Rouge, La. So it was a short day for some of the groups that came down but all of them had a few fish before they called it early. So, the fishing turned right back on over the past several days, but mainly black fin tuna. The yellow fin are here, but you’ve got to make the run right now to find them consistently. There have been a few wahoo mixed in as well. The Amberjack bite is very good for those interested in fishing for jacks. When you find one, you find a bunch. So, over the next several weeks we will be targeting most Yellow fin tuna.The spring months are usually very good, most of them avg. about 40-80lbs. Chum, live bait (when you can find it), and top water lures are the most productive during April and May. Dolphin will start to mix in with the Tuna in probably late April, some years they are early so we will see on that. We still have some open days in April and May for both offshore and inshore fishing.