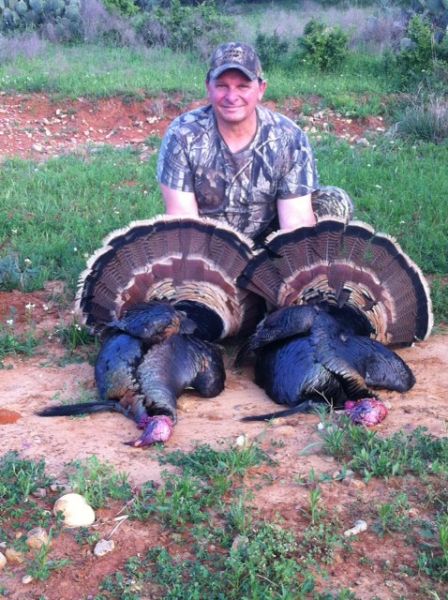 Made my first spring turkey hunting trip for this year down to my friends ranch in south Texas and had a blast. Arriving just in time to make an evening hunt on April 1st I set out my gobbler and hen decoy and settled in for a long afternoon of calling. Within 15 minutes a hen showed up followed by two long beards. The hen was nervous and the gobblers were just out of range so I had to let her walk away with the gobblers in tow so not to spoke them. Once they were out of sight I started calling aggressively and got both gobblers fired up and they came back in gobbling their heads off. I shot the first one at 38 steps and the second gobbler jumped on the down bird and started spurring him. I followed up with a second shot and dropped him. What a way to start of my south Texas turkey hunt. One gobbler had 4 beards, an 11”, 6 ½”, 6”, and 6” with 1 ½” Spurs. The other Gobbler had a 10” beard with 1 3/8” Spurs. I was using my browning gold 12 gage 3 ½” Magnum with #6 Winchester Turkey load. I tagged the birds and walked back to the truck grabbed my Remington 700 in the .243cal and went looking for hogs. Just before dark I spotted a big boar crossing a small field and pulled a sneak to within 150 yards, settled on a fence post and placed the shot right behind his ear and he dropped like a rock. I heard several other gobblers that afternoon and was excited to get back after them in the morning. Morning approached with me sitting on a high point listening at daylight. As soon as the song birds started their morning ritual I heard two gobblers in the distance. I headed in that direction and got to within 200 yards from one and the other was about 300 yards. Made a few soft tree yelps and the close gobbler started talking back at me. He would gobble and the farther gobbler would follow up with a gobble. It was so cool and I had both of them gobble over a 100 times while they were in the tree. Once they hit the ground it was a different story as one gobbler shut up and the one would still gobble at my calls but was walking away. I never heard hens but figured he was with some. After about an hour I saw some movement and spotted a long beard sneaking up to me from behind and had to freeze as he walked within 8 steps from my location. When he stepped behind some brush I was able to make a move and get my gun up and ready. He was focused on my hen decoy about 20 yards in front of me and never knew I was there. I shot him at 9 steps and rolled him over. He had a 10” beard and 7/8” Spurs. The neat part is I was able to get some video of him and the kill shot which I will post when I get time to put it together. I tagged him and back to the truck I went only to hear another gobbler in the distance. I spent the rest of the day chasing gobblers and getting some great video. I videoed a slammer gobbler out in a field with 3 hens and made him gobble 50-60 times at my calls. He would never break away from the hens but just getting to watch that and video it was awesome. I had one tag left to fill and tried my best to connect with another gobbler without any luck. That gives me reason to go back down there in a few more weeks! The late afternoon gave me a chance to chase hogs again and I connected with another big hog with a well places shot behind the ear. This ranch is overrun with hogs and on my last afternoon there I took 3 more hogs out of a group about 25. First time I ever have been able to unload a bolt action rifle with 5 shots before the hogs all vanish. 3 more hogs down and a lot of cleaning! Lol
Can’t wait to get back down there in a few more weeks!
Reply 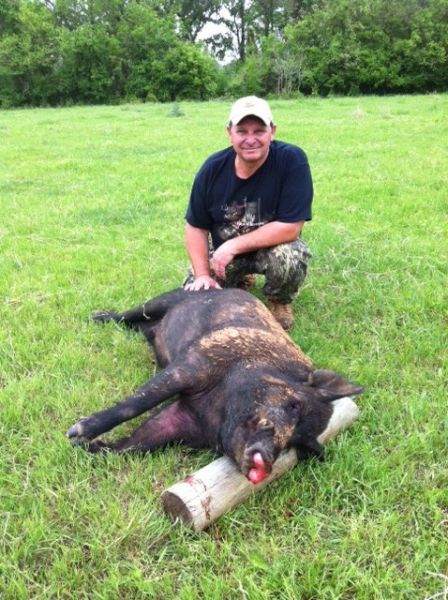 JaredSerigne
South Tex is the promised land for sure. Congrats man. Memories that will last forever.
Reply

Admiral Rabbit
...we have a friend 60 mi past Katy,Tx w/200a/c...claims turkeys come thru in herds of 25 and 30...looks like a stampede ???...they have less taxes and seem to get more general dollars and ethical dealings than we do...cheers
Reply