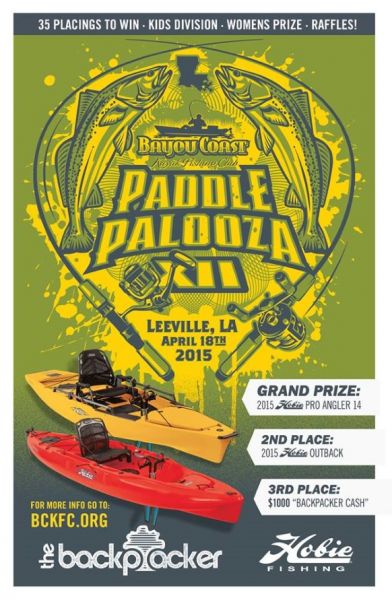 We already have 243 signed up and may get to over 300. Today is the deadline before the late fee applies. Go to: www.bckfc.org to register

Examples of legal stringers in Cajun Slam division:
3lb trout + 1lb flounder + 4lb redfish = 8lbs “True slam” and will be weighed and scored ahead of any two fish stringer.
5lb trout + 7lb redfish = 12lbs but will be scored only after all three species slams are placed.

LADIES CAJUN SLAM BONUS:
The female angler who catches the heaviest Cajun Slam wins a bonus prize in addition to whatever other category she places highest in, if any. For example, if she wins “Mule Trout” in the regular competition, she can also remain eligible to win the Ladies Cajun Slam. This is the only exception wherein a contestant can win in more than one category.

*FREE KID’S CAJUN SLAM DIVISION*: Junior Anglers age 12 and under on tournament day are eligible to compete if they are not a paid participant of the regular tournament. The same rules apply as for the Regular Cajun Slam Division. Youths ages 12 and under who have elected to pay and register to fish the general tournament will not be eligible to fish the Kids Division.
Prizes and number of placing’s will be determined upon participation.

*** Kids fishing the Kids Slam Division are permitted to ride and fish in a kayak with another angler however any fish caught must be kept separated from the other anglers catch. Simply put …do not dump all the fish in the same ice chest or ice bag, unless they are placed on separate stringers first.

Leopard Red: First place wins a kayak (Brand/Model TBA)
***16+’’ to less than 27’’ NO BULL REDS***
Redfish with the most spots wins. NOTE: If any part of the black inner spots is touching then it is counted as a single spot. There must be a break between the black portions for spots to be counted as individual spots.
Mule Trout: heaviest speckled trout over 12' wins.
Big Red: heaviest redfish wins (16+'- less than 27').
Saddle Flounder: heaviest flounder over 12' wins.

NOTE: Contestants will be allowed to win only one category (exception for Ladies Slam as previously noted). The Tournament Director will determine if your catch / stringer will place better if entered as the slam division, in a single fish category or in the leopard red category. An individual angler can submit up to 4 fish - one of each species to enter the slam category and an additional redfish to enter the leopard red category.

***PFD Requirement: You must properly wear a U.S. Coast Guard approved PFD while in your kayak during all BCKFC events. Failure to comply with this rule during competition could result in disqualification from tournament. Disqualification will be determined by the Tournament Director based on investigation of any specific incident.

Fish that violate LDWF regulations may result in the participant’s disqualification, forfeiture of any prize awarded, and potential prosecution. No refunds will be offered for any participants who are found to be in violation applicable statute(s) and LDWF S.O.P with regard to creel or size limits.

Two or more fish of the same species cannot be combined for this tournament except that a second redfish may be entered in the Leopard Red category.

A participant may only win in one category (exception for ladies slam – see above).

LEGAL TACKLE / BAIT: Live, dead and artificial bait is legal for this tournament. If LDWF says it’s a legal bait or attractant, it’s okay to use it in this tournament. All fish must be caught using hook, line, rod and reel. No trot lines, set lines, yo-yo’s, gill nets, hoop nets, drop lines, etc… are allowed.

PADDLE / PEDAL-CRAFT ONLY: No trolling motors, sails, gas engines, “mother ships,” etc… Tandem kayaks, canoes, pirogues, paddleboards are allowed. A participant may wade fish or fish from the bank as long as they remain within 100’ of their LAUNCHED paddle craft. With regard to this rule, “launched” means your kayak is off of your vehicle/trailer and that a portion of the paddlecraft is in fishable waters (not a parking lot puddle).

WATER COURTESY / ENCROACHMENT: Apply the golden rule. Do your best not to disturb someone else’s fishing area by encroachment, noise, etc… If you encounter another angler in a narrow ingress/egress area, as quietly as you can, ask which side he or she would like you to cross. Generally, a good rule of thumb is that if you can both cast to a common point you have encroached.

PROTEST: All protests must be made in writing and delivered to a tournament official within 30 minutes of the closing of the weigh station. The tournament officials and board members who are available will consider protests and determine what, if an, action is required. The tournament director is the final authority in all considerations. All anglers are encouraged to report violations. Cheating in a fishing tournament is a crime in the state of Louisiana. BCKFC has a zero tolerance policy with regard to cheating. Any participant and/or prize category winner may be requested to submit to a polygraph examination for any reason. Any refusal to submit to testing will result in immediate disqualification from the tournament, forfeiture of any and all prizes and potential banishment from all future BCKFC events. No refunds for tournament fees will be granted for person(s) refusing to submit to a polygraph examination.

LEGAL FISHING TIME: Your first cast is not allowed until 5:00am. Early fishing = disqualification. REMINDER: YOU are responsible for displaying safe lights and for your own safety.
BE SEEN!!!

RULE CHANGES: Interpretation of rules is exclusively left to the Tournament Directors and BCKFC Officers. The decisions of this group are final in all matters and are not subject to appeal. Please do what you can to not put them in a position where they have to make rulings, decisions, etc… Keep it simple and keep it clean. When in doubt, do the “right” thing.

PAYOUTS / PRIZES:
40% of total entry fees collected before online registration ends will be paid out as cash prizes in various categories.
40% of the entry fees will help to pay for the shirts, food, and other tournament expenses.
20% will be presented to a charity approved by the membership.

Registration fees collected after online registration closes will not be factored into payouts and will be deposited in BCKFC’s general account fund. Sign up early! Make the prize pot bigger!!!

We’ll also have raffles with raffle prizes sure to make the average angler salivate!!! Make sure to buy plenty of tickets!!! Proceeds go toward club expenses.

PARTICIPATION AND ELIGIBILITY: Participation is open to anyone 18 years of age or older and to minors who are eligible to participate with a parent or legal guardian. That parent or guardian, not BCKFC, is responsible for the safety and well-being of that minor. All participants represent that they are physically and mentally competent and fit and able to participate. By entering, all participants agree to assume ALL risks of personal injury, death, and damage to or loss of property and further agree to indemnify and hold BCFKC, its officers, members, agents, and sponsors harmless from and against any and all claims, liabilities, and causes of action resulting directly or indirectly from participation.

Late entries will be accepted at the Captain’s Meeting on Friday, April 17th, 2015 at Top Water Marina.
There will be a $10 late fee.

CAPTAINS MEETING: Attendance at the Captains Meeting is optional. It will officially begin at 8:00 pm Friday April 17th at Top Water Marina, Leeville, LA but participants are welcome and encouraged to come early to socialize. At the meeting we’ll go over the rules, boundaries, restrictions, etc… A Q&A session will also take place. Those who attend MAY also be able to pick up their shirts and captain’s bags that night.

SIGN IN / WEIGH IN: Upon arrival at Top Water Marina for the weigh-in you must sign in at the sign-in table. The sign-in table and scales will be operational by approximately 3:00 pm. You MUST be properly signed in prior to 4:00 pm to have your fish weighed in. The line closes PROMPTLY at 4:00 pm. Ties will go to the person with the earliest sign-in time.
DO NOT BE LATE!!!

All competitors must check in with legal fish as per LDWF regulations to be eligible for awards and prizes. All fish submitted for weigh-in must be fresh and caught on the day of the tournament. The weigh-master will make decisions on accepting fish for weigh-in. His decision is final. Any attempt to enter fraudulent catch, exchanging catches, tamper with catch, or to hamper or threaten any official of the tournament will result in immediate disqualification. Only authorized persons will be allowed in the sign-in and weigh-in stations.

You will receive a weigh-in card when you check in at the sign-in table. Once you have checked in and received your weigh-in card you should proceed to the scales to have you catch weighed. Generally, fish that are weighed in are surrendered to BCKFC to be used in the fish fry that evening. Exceptions can readily be made for those who wish to have their catch mounted, etc…

The largest fish will be determined by weight. In the event of a tie, the participant who signed in first will be considered the winner, and the other participant will be dropped to the next position. Fish will be bent, and loosened before being measured. The tail will be pinched and an official length will be determined. This method of measuring fish can be found in the LDWF fishing pamphlet available at most fishing tackle retailers and online.