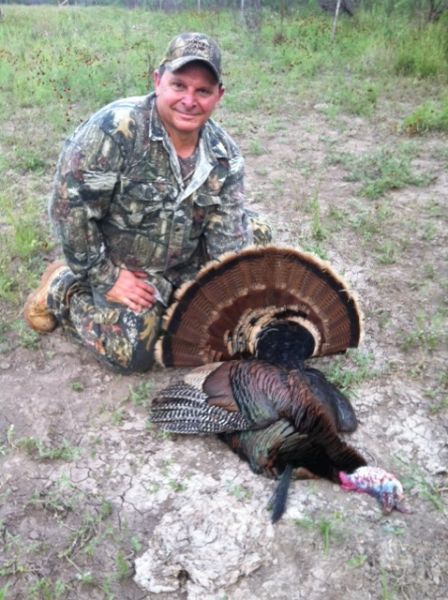 On my 2nd trip back to south Texas on April 23rd I finished tagging out with my 4th gobbler on the afternoon I arrived at my friends ranch near Crystal City. After a short sit on a small field and calling I was able to capture some great video of 4 Jakes coming up to my decoys and hanging out for a while, then a deer smelled me and started blowing and spooked the turkeys away. After about an hour of nothing happening I stood up to stretch and saw two turkeys entering the field I was sitting on about 200 yards out. I eased back down made a few yelps and had both in a dead run towards me. One turkey was a hen and the other was a nice mature gobbler. He would slow down and try to strut but the hen was running in my direction so it forced him to run to catch up to her then he would try to strut again. The hen arrived at my decoys a few yards ahead of the gobbler and once the gobbler made it to the decoys they both knew something was up. I quickly unleashed my browning gold 12 gage with 3 ½” #6 turkey load at 30 yards and rolled him in his tracks. He had a 9 ½” beard and 7/8” spurs, which filed my last turkey tag for this year along with some great video footage.
My 3rd trip to south Texas was at a different ranch near Devine and this time I was trying to get two of my friends each their first Rio Gobblers. We arrived too late for an evening hunt on April 28th so we settled in for the night and then headed out early enough in the morning to catch turkeys still on the roost. As daylight came so did the gobblers gobbling in 3 different directions. There was a total of 5 different gobblers so we went to the closet ones. It turned out there was 3 gobblers together roosted within 30-40 yards of each other. We setup with decoys in front, my two buddies next, and I set up behind them with the video camera. After fly down the gobblers came in but then moved off. We moved with them but ended up getting busted on one of our moves. Later in the morning we struck up what sounded like two or three gobblers together. We quickly setup and it was on! In no time we had 3 gobblers approaching our position. I was getting some great video footage while my buddies waited for the approaching gobblers to get within range. 80 yards, then 50 yards, the 30 yards. Boom one shot then boom another shot. I was filming so I only seen on gobbler go down. The second shot was a miss! The gobbler we took had a 11” beard and 1 ¼” spurs. It was his first ever Rio Gobbler and what a great trophy bird it was! We spent several more days chasing countless other gobblers but could never close the deal and ended up only with the one gobbler for that trip. South Texas turkey hunting was awesome again this year as it has been for me the last 10+ years. I never get tired of chasing those Rio Grand birds. I will post my videos on YouTube when I get some time to work on them under Channel LETUMGROW.
Reply