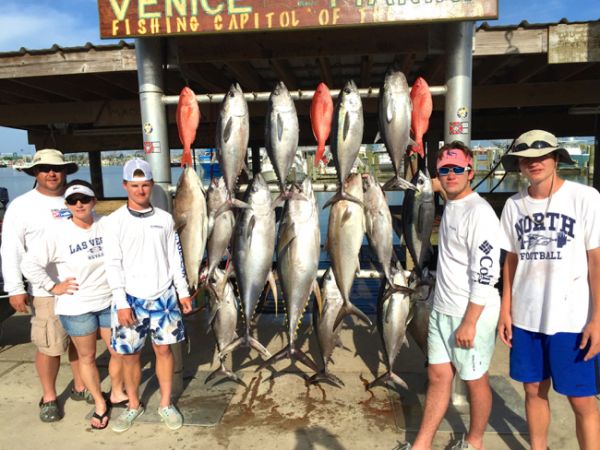 The offshore fishing out of Venice right now is definitely starting to move into more of a summertime pattern, which is definitely welcome. April was ok this year, there were some very good days of fishing but the weather did limit us from getting out to a lot of the better areas. May is starting out good, the Yellow fin Tuna are starting to move into the usual spots for this time of year which are the floaters and spars in the deeper water. The Mahi-Mahi are starting to show up as well. We haven’t seen as good of a year as 2009 for the Mahi’s since 2009, so hopefully this year will be similar to that. It was good enough that we had to run from them most days if we wanted to catch something else besides Mahi Mahi and it didn’t seem to matter where you went, they were there. Even if you stopped in the middle of nowhere for a quick bathroom break, next thing you know one or two would swim up next to the boat. It was unreal. But that same year we also had a very strong current pushing up from the Southern Gulf, there was a boat -oad of refugees that pushed up off the La. coast and we saw several boats with nobody in them that more than likely came from Cuba. So if we start to see that again this year, we know it will more than likely be an unbelievable season. Snapper season opens up on June 1 and that will be easy limits most days. The Cobia should be mixed in with them as well. Our latest trips were this past Friday and Saturday. The weather was doable both days, although it was still a little breezy. Capt. Scott had the Brown and Wolf crew from from Tx. And Arkansas. Both days resulted in plenty of Black fin Tuna and limits of Amberjack. On Saturday they caught Black fin Tuna to the point where they just wanted to catch and release and called it a day after they were completely worn out. Capt. Ronald had the Donnelly and Wolfenden crews from MS. And AR. Both crews decided to go long and chase Yellow fin Tuna. The fish were there but it was fairly tough to get them to bite. On Friday, the Donelly crew caught 4 Yellow fin in the 50-70lb. range, and on Saturday the Wolfenden crew caught 2 Yellows both in the 80lb. range. So, the fish are there and the numbers of fish caught will start to increase over the next couple of weeks, especially as the weather starts to straighten out some. We have open days to fish offshore for whichever species you want to target.
Reply