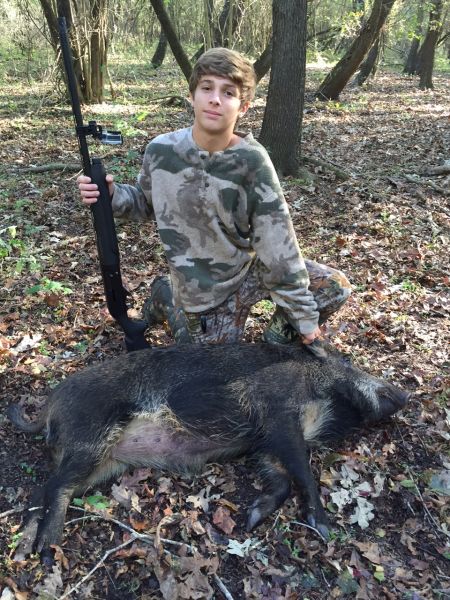 Just a little background, years of unsuccessful hunting before learning what we call the “Quick Draw method”. This started five years ago when I made a commitment of not lifting a gun on public land until my son made his first kill. Long story short, over that period my son missed 18 deer/9 hogs on public land including some nice mountable Bucks’. He would almost break out in tears when people asked what was wrong or after he missed, but the hard truth was you have to be fast with seconds to make decisions when hunting public land. To this very day we have not seen nor shot an animal on public land that was standing still, most of the kills the target was coming by like a streak of lighten and you had to lead the gun a football field distance ahead. Safety was paramount when learning the quick draw method, fist you have to be alert /ready at all times, second the target must be 100% identified, you have to make the decision to look in the direction of the leading gun barrel verifying a safe back ground and finally getting the bead on target. It is a fact that a few times we could not pull the trigger due to unsafe factors. Proactive safety methods we learned; Not walking next to each other and agreeing on the safe direction each of us can shoot, walking in separate ravines and walking or stand locations on the out skirts of the nasty thick stuff giving us opportunity to make 100% identification be four pulling the trigger. I found this style is a small answer to the equation hunting public land but other larger equations due exist like different animal species reside in 10% of the public forest and 10% of the hunters scout these places but that’s for another story.
This was preparation weekend to get the camper set up; I should have known it was going to be hard work involved. The hunt started Saturday morning deciding to make a one hour hunt close due to no 4 wheeler and obligations for 2:00pm. I sat down on my favorite hog log right before morning day light; I kept hearing noise but didn’t see anything. As I looked behind me, ten hogs were less than five yards, 22 mags swung to the left side. As they started to run I pulled the trigger and made a clean head shot. My son had the same thing happen and busted a hog on the run, that’s when the work started. Dragging a hog with no 4 wheeler over a half mile is no fun. We will be back Thanksgiving weekend preparing for the public deer party that takes place every year.
Reply