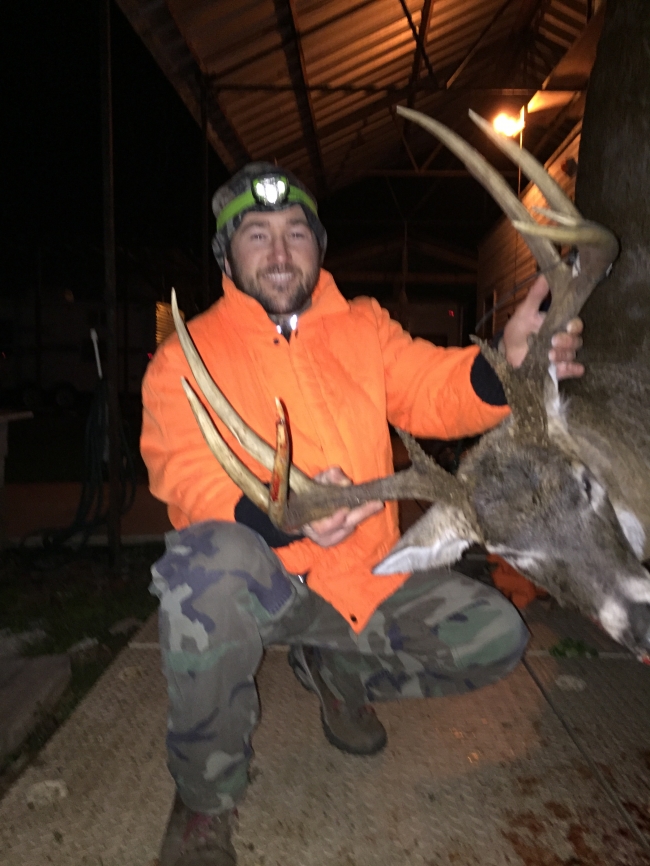 I have been asked by a few people to post this story on Louisiana Sportsman. Some of you may have already read this story on another site. Just so you know, I just copied and pasted.

Well guys and gals, I am tagged out on my Buck tags. This is my biggest deer to date, but I will try to keep the story as short as I can (which I am not that good at) so please bare with me and enjoy.

Made a morning hunt with my cousin Matt Thomas. I have two young boys so there was no chance to scout. Decided to hunt a tree that I have had success with before. As the sun came up I saw a light in the woods. This light turned out to be a huge rub, the kind you dream about finding. I text Matt and told him to come by after the hunt to see this rub. As he made his way to me, he jumped a 'big body deer'. I knew this was the one I was after. Headed home after that planning to hunt another day.

Couldn't get the rub out of my mind so I took a day of vacation. The morning of the 6th my youngest son had me up at 2:30, couldn't go back to sleep so I got up and headed out to Sherburne. Arrived, got dressed, put my waders on and was making the 2 mile trek by 5:00a.m. Got to my stand at 6:00 and was settled for 6:15. At 7:50 I saw a doe 50 yards North of me. I immediately turned my attention behind her. The fist time I saw him, I knew he was the one making the big rubs. He looked like a horse running through the woods. I was able to get my gun up, and had a split second opportunity, but there were too many branches in the way. I was hoping for a better shot, but he never gave me one. The doe headed south into some high water and the buck followed. The missed opportunity replayed in my head the rest of the day.

Short summary of the day:

My plan was to get down at 3:30 so I could make it home for 5:30, but news of the Morganza opening, and with my lovely brides approval, I decided to stay till dark. At 5:00 I heard something walking in the water south of me. It was a doe at 125-150 yards and she was headed right for me. It sounded like something was following her, and as luck would have it, the same big buck from that morning was 50 yards behind her. They walked 75 yards to the east of me never knowing I was there. I watched the buck as he made his way to a clearing in the woods. He was facing me, but had no clue I was there. Wind in my face and the doe on his mind, all I had to do was patiently wait for the shot to present itself. He slowly started to turn broad side, and after what seemed like an eternity, he took his last step. 30-06 core-loct went straight through his heart. He ran 50-70 yards directly south of me and piled up. I looked like Mike Tyson shadow boxing in the stand.

I climbed down to go see what turned out to be the biggest deer I have ever seen, much less killed. He was a 240 lbs 9 point with 18-1/8 spread. A very impressive animal. The emotions of success are unexplainable. I thanked God for all his blessings he has given me. I called my wife and cried tears of joy! After the celebration was over the work started.

It was now 5:30 and I had a 2 mile drag. Because the Morganza was rumored to open, my cousin Louie Thomas was already headed to the camp to hunt the last weekend of the season. He got some photos of my deer and quickly realized that we were going to need some help. He called his son Mark who is an iron man/mule/two legged four wheeler. Mark dropped what he was doing and headed out to come help. It took me 2 hours to drag him the first 1/2 mile by myself. Having only had 2 protein bars and one bottle of water all day, my body was getting depleted of nutrients. At 8:00 p.m. Mark comes running through the woods in blue jeans and a pair of running shoes like he just robbed a bank. He was wet up to his crotch from all the deep water. Not far behind him was Louie with the cart. It took the three of us the next 3 hours to get him the 1.5 miles back to the truck. No way I could have done it without them. Needless to say, the cart is now deceased.

And I owe it all to my lovely bride!!
Reply

hunt r
That's a true monster on any land. Just about the longest g2's I've ever seen. congrats.
Reply

Quackquackboom96
That's an amazing deer for anywhere but to kill that in Sherburne out of all places is truly impressive! Congratulations!!
Reply

EARLY TIMES TWO
Man!!!! It doesn't get better than that. The deer of a life time experienced with ya podnahs.
Awesome story, thanks for sharing....Congrats
Reply