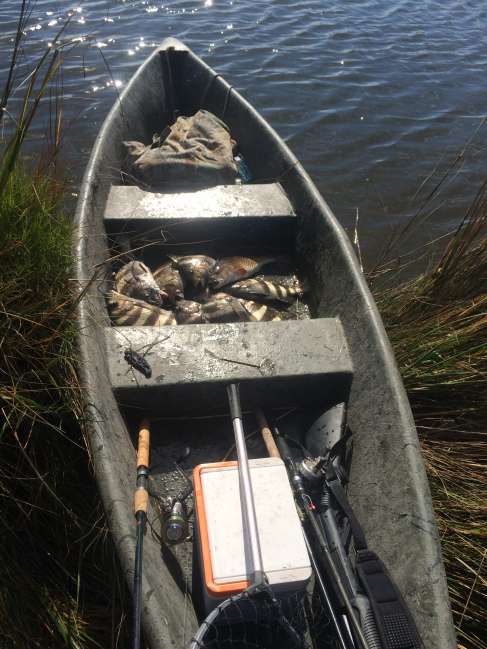 Decided to do the same thing as last week and take my pirogue to the pond by my camp down in Cocodrie, but this time I made sure to get their early. By the time I reached my first little fishing hole it was 10 A.M. The bite was slow and then I finally found a little canals hat was loaded with sheepshead. I caught 8 nice sheepshead, a red, and a drum. Ran out of bait shrimp so I decided to go in and get more bait. After a lunch break I went back out and only caught 3 more sheepshead. I made a move to another pond and I noticed there were Pelicans and seagulls diving into the water. I got there and whenever I caught the first trout with bait shrimp I hurried up and tied on a Shrimp Creole Matrix Shad with 3/8 jig head and the bite was on. Every cast I was pulling in specks but unfortunately most were under size. Only 12 were keepers. I threw back close to 20 specks that afternoon. Also caught 2 reds and 2 drum that afternoon on the Matrix Shad. At the end of the day I caught a total of 11 sheepshead, 12 specks, 3 reds, and 3 drums.

Matrix Shad Review: Friday night my dad told me to go to academy and pick up a couple packs of the hottest soft plastics on the market right now 'The Matrix Shad.' Well now I see the big hype on the bait. The best part about the bait is how durable and well made they are. I caught over 30 specks and 2 reds and only used one bait and its still almost good as new. I give the Matrix Shad an A+.
Reply