Swamphunter
Larry Reynolds, I understand that the proposed duck hunting dates for the different zones were recently published for the duck season for 2016-2017. Where can we find this info?
Reply 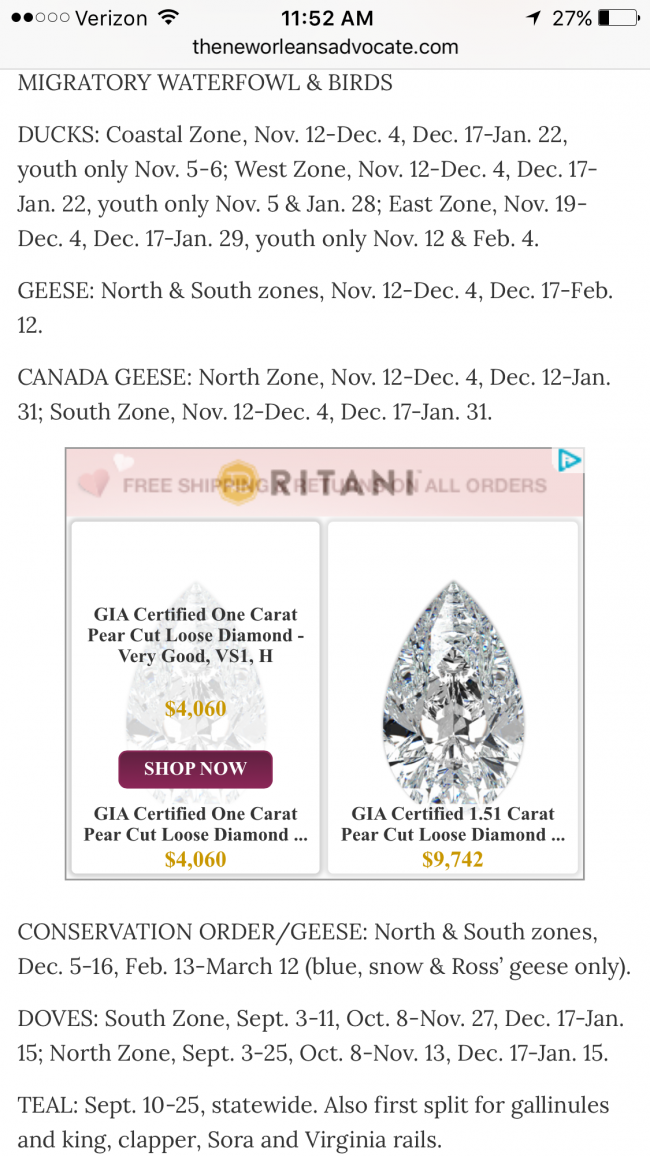 The link was not loading so I took a screenshot.
Reply

There will be 8 public meetings in late February. The press release at: http://www.wlf.louisiana.gov/news/39823 gives you the times and dates. Changes can be made to the NOI (ie. season dates) at the February and March Commission meetings, and the final vote will be made at the April meeting. So there is plenty of time for public comment.
Reply

pintail_89
those dates are as stupid as this past season and all other seasons, can someone please give me a logical explanation as to why the season can open later and close later to allow time for more big ducks to move down. make it to where the season goes through at least mid feb or even the end of feb
Reply

licensedtokill
Pretty sure the 'logical explanation' as to why the season doesn't extend into February is that silly thing called federal law.. It's buried deep down in that migratory bird treaty act or in Title 50 somewhere lol
Reply

duckhunter7777
That's perfect for coastal zone what are you guys talking about! In my opinion you guys in grand isle or far cocodrie do well in late season because the water levels finally drop from 3 ft to six inches where they can dabble. Ive seen it in Biloxi the deep water areas suck in first split but the shallow areas are on fire. Then second split water blows out the deep water becomes where they want to be its not deep anymore.
Reply

lanco1
The reason that duck season ends in January is because pair bonding begins and ducks need to fatten for the spring migration north. The thinking is that if hunting pressure continued into spring more hens would arrive skiny and single thus delaying nesting efforts and reducing clutch size and breeding sucess.
The coastal zone dates (as proposed this year) are a compromise between those who want to hunt the entire month of November and those who wish to hunt the entire month of January. It isn't reasonable to expect thd dates to be set strictly to accomodate a handful of hunters in golden meadow .
Reply