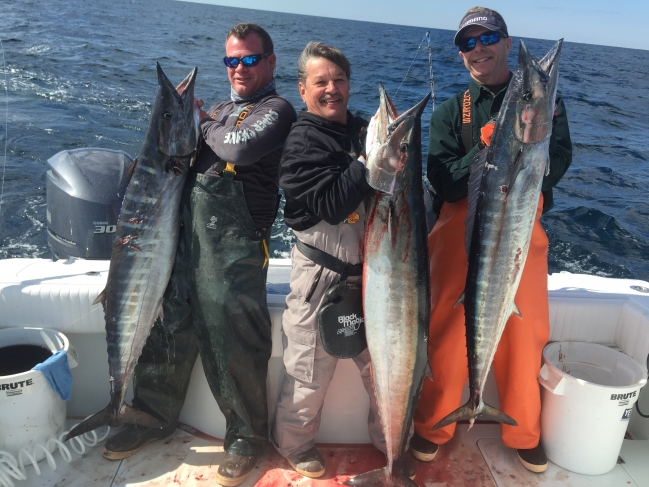 It has been a while since our last post, however, we have been fishing fairly steady in between the weather we have this time of year. Yesterday we had Rep. Rob Whitman and his good friend David from Richmond, Va. down for a couple of days. Mr. Whitman was introduced to Venice back in 2012 when he was invited as a guest of Doug Olander with Sport fishing Magazine to do an article with us. It is safe to say he is going to have a lot of good things to say about the fishing down here once again, and he is no rookie when it comes to fishing big fish. The plan was to target Wahoo both days, (Mon. and Tues.) this is the time of year when the big ones show up and stick around for a month or two. The weather on Monday was pretty rough, we just had a strong front that came thru the day before and it dropped the temps. into the 50's, although the wind did come down a lot from the day before it was still around 15-18K in the early morning hours. The water temps were in the mid 60's, clean water, looked perfect for catching hoos. We hit numerous spots only to get a double hook-up on Jack Crevalle. The rough seas made it a little tough to troll in but as the day went on it starting calming down. We hit a few more areas with no luck so we turned our attention to Tuna fishing and it was a good choice. We started out catching a couple of black fin tuna while waiting for the Yellow fin to show up. Then we got a call from another Capt. that was out there and said it was on about 7 miles from where we were and sure enough when we showed up it didn't take us long to get a big boy on. We ended up catching a 127lber, 100lber, and a 95lber. and they said no more, although the bite was still happening and getting better. So, on Tuesday we went back out to either target Tuna or Wahoo, but based on our luck from the previous day on wahoo we figured we would get back on the tuna. The seas were about 2ft. and was a perfect day to troll. We went back to the area where we fished the day before, we had blue/green water and it looked as good as ever to fish wahoo. It took about 5 minutes to get our first strike, the reel screamed and it was obvious we had a wahoo. Rob got him to the boat in about 15 minutes and it was the largest of the day going 79lbs. For the next several hours we pretty much had non-stop action catching hoos. Most of the morning it was single hits and we went 5 for 5. Then we had a triple and landed all of those, then a double and got caught those as well. The crew went 10 for 10, which is amazing, considering that Wahoo are masters of shaking the hook. They put it on 'em to say the least, and called it a day at 10. Our other boat was out with the Knox Clark crew and they hammered the Tuna as well catching 8 Yellowfin tuna and 8 Black fin tuna. The fishing is on so if your looking to catch some fish its time to go.