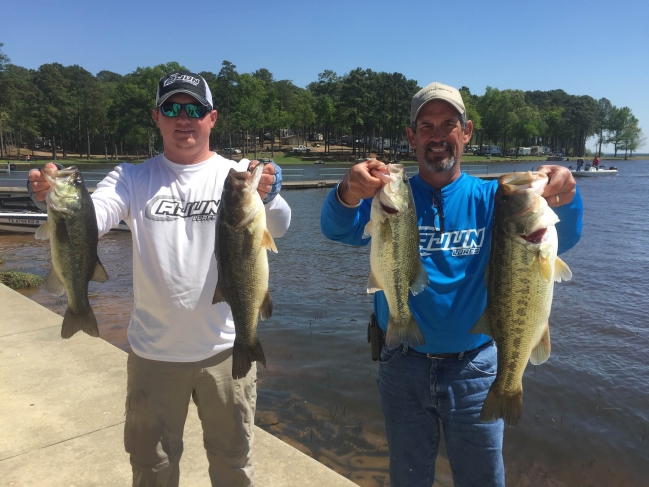 This weekend we fished the LOBI Tournament. A great tournament put on for everyone associated with the oilfield in Louisiana, that donates to great charities. They do a great job with the festivities and weigh ins.

Of course when we decided to put our money up, a cold front came through and wind blew heavy, in the upper 25mph range. And on Toledo, that means you better hold on! And on Sunday, when the tournament was over, it was calm and sunny.

Friday we managed to catch our fish on Wacky Rigged Batons in Watermelon Rouge color in the hay grass in the morning. Three fish right off the start 2 being short and 1 keeper. Later we boated another keeper. The North wind picked up heavy and blew us into the bank, our best spot, so we had to shift to the north end of Negreet to find calm water. The wind didn't help our Bass Tracker to navigate.Later in the day we had 2 good bites on the wacky worm, but lost at the boat. Both in 3-4 pound range. That is the downfall to wacky rigging when using smaller hooks.

Saturday was a better day as we managed two keepers in the morning on a 3/8oz Sexy Mouse Kajun Boss Spinnerbait. One being a 4 pounder. We stayed on the north end this time to instead of trying to fight the mighty wind. The fish were hanging around alligator grass with bushes close by. We also watched a few other anglers boat nice fish, so the pattern was true. Later in the day we picked up the wacky rigs and boated two more fish, one being a 5 pounder. We couldn't get the 5th fish for the day. We caught plenty, just a lot that were short of the 14' limit.

Our other team members credit their catches using a Pearl White Swamp Swimmer on the back of 3/8oz white and chartreuse swim jigs. Fishing 6ft of water surrounded by hydrilla and bushes on the North End of the lake.
Reply