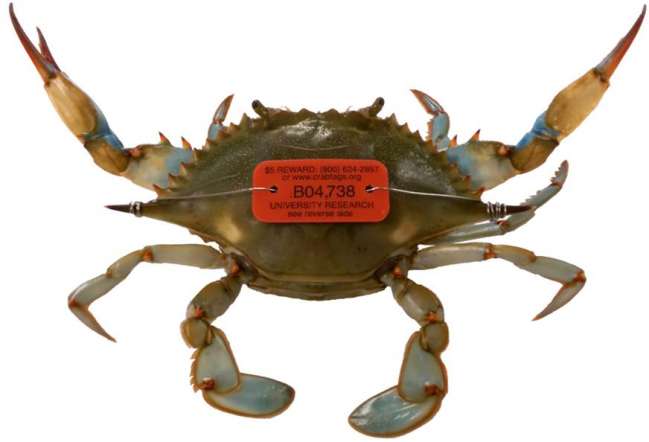 I am a researcher with Nicholls State University. We are conducting a research project to better understand blue crab movements throughout coastal Louisiana and the Gulf of Mexico. As part of this project, we are tagging female blue crabs throughout the Gulf. I am attaching a picture of a tagged crab. We are reaching out to the commercial and recreational fishing community to ask for your help. If you catch a tagged crab, please call us and report it. We are offering a reward for each tagged crab reported, and are asking for the following information:
-Tag number
-Date caught
-Location caught (GPS if possible, if not a descriptive location is fine)
-Was the crab carrying an egg mass/sponge? If so, what color was the egg mass (orange, brown, or black)?

We are not trying to close the fishery or impose any additional regulations. We are simply trying to learn more about this valuable species.

qhebert
you do know when these crabs get bigger they will pop off their top shell and you will lose those tags.
Reply

NichollsCrabTags
Sorry, I should have clarified. We are only tagging mature female blue crabs. The females rarely if ever molt after they reach maturity. We may lose a few to the occasional mature crab molting, but not enough to affect the study.
Reply

Dr. Spot
Female crabs only molt once in their lifetime. Male crabs are the ones that continuously molt. I only learned this recently too.
Reply

CaptJS
Females molt 18 to 20 times, not counting larval molts, in the course of a lifetime. Males are believed to go through the ordeal 21 to 23 times. With both sexes the time between molts (instar) grows progressively longer ranging from 10 to 15 days for one-inchers to 30 to 50 days for legal hard-crab catch size and beyond. Who told you Dr.
Reply

Dr. Spot
Male crabs tend to molt throughout their lives, while females have just the one 'terminal' or 'maturity' molt. Female crabs can mate only once during their lives (during their terminal molt when in the soft-shell stage), but store sperm for multiple spawnings. But they do molt more when they are immature. This is why the Nicholls State tagging will work, they are dealing with mature females.
Reply

NichollsCrabTags
CaptJS and DrSpot- you're actually both right. Female blue crabs molt multiple times as juveniles. BUT, once they reach maturity, they stop molting and never molt again. Mating can only take place when the female is still soft (or at least partially soft), so they really only have that one opportunity to mate.

So females do molt multiple times (as juveniles), but once mature they do not molt again, which is why we are able to tag them.
Reply

CaptJS
sorry I only got my info from Google as stated. I knew the female crab molted more than one time as my neighbor is in the soft shell business so I google the life cycle of a blue crab. Nothing is from my knowledge.
Reply

viciousfishes
I would like to know how you can tell a female is at the end of her molting cycle. Where she will no longer shed her exoskeleton. And how long can she produce young after this termination.
I remember when I used to shrimp out of Cocodrie, female crabs as small as my index fingernail with sponge. Has a crab that tiny mated?

I know you're looking for crab movements. Would have been nice to have tagged some in the western end of Lake Pontchartrain before the BC Spillway was opened this year.
Reply

CaptJS
My neighbor has a soft shell factory and it is amazing to watch him handle crabs and tell you what cycle they are in. He can handle them with no problem but let me or the grandkids try and it not good lol.
Reply

'I would like to know how you can tell a female is at the end of her molting cycle. Where she will no longer shed her exoskeleton. And how long can she produce young after this termination'
You can determine if a female is mature by looking at the shape of her abdomen, or apron, on the underside of her body. When immature it is a triangular shape. Once mature, it becomes much more rounded and dome-like. They stop molting once mature. There are some useful pictures here:
https://www.bluecrab.info/identification.html

'I remember when I used to shrimp out of Cocodrie, female crabs as small as my index fingernail with sponge. Has a crab that tiny mated?'
That is quite a small crab! I have seen some 2-3' female blue crabs with a sponge, but never one that small (not saying its not possible, though). There are a couple other species that look very similar to blue crabs but are quite a bit smaller- maybe it was one of those? Hard to say without seeing it. If anyone else that reads this catches any very small blue crabs carrying a sponge, please take a picture and send it to us. We are also very interested in crab growth and are doing some research looking at growth rates and size at maturity under varying environmental conditions. We are always interested in extremely small or extremely large crabs. But yes, if its carrying a sponge, it has most likely mated.

'I know you're looking for crab movements. Would have been nice to have tagged some in the western end of Lake Pontchartrain before the BC Spillway was opened this year.'
I agree, and its too bad we missed that. Unfortunately the tags had not yet arrived, so we weren't able to get any tagged before the opening. We'll be ready in the future, though.
Reply

Dr. Spot
This has turned into a great and educational discussion. Thanks for the original post and the followups.
Reply

Pat Bonin, Louisiana Sportsman
I talked with Zack today. Click the link for a few more details on the project: http://www.louisianasportsman.com/details.php?id=9490
Reply

viciousfishes
Thanks for the answers NichollsCrabTags.
I am sure that the tiny crab with sponge was a blue claw. I've caught many types of crabs while trawling. Spider, Rooster, Stone and more that I cannot name.
One thing that bothers me is the shape of the bottom flap determining the maturity of the blue crab and the end of her molting. Many soft shell crabs served in restaurants are female with the rounded flap. I've shed many females aboard my boat with the rounded flap. Many tiny crabs have the rounded flap.
The ones with the triangle flap never see them get to a #2 sized crab. Nor ever with sponge. And there are too few of them to say they make up the female population. I would love to see one molt into a female with a rounded flap.
These are my very unscientific observations but they are observations none the less.
Reply

I've seen many 'triangle-flap' females molt into 'round-flap females'. When they undergo that transition, that is when they become sexually mature. The flap is the abdomen- similar to the tail of a shrimp, crawfish, or lobster, just folded under the crab. When immature, the abdomen is triangular and held tightly shut- it's actually locked in place and is VERY difficult to pry open- essentially making it impossible for her to mate with a male. During the final molt, when the female becomes mature, the abdomen changes to the round shape. This shape makes it possible for the female to carry the egg mass, where she wouldn't be able to carry the egg mass with the triangle abdomen. The abdomen is no longer tightly locked in place, either, and can be pried open fairly easily.

We do frequently see soft-shell females with the round abdomen. These are the newly-matured females that have just molted and reached maturity. Before that molt, they would have had the triangle-abdomen. Based on our current understanding, that should be the last time they will molt. So from when they hatch from the egg, females typically (of course there are exceptions) go through 18-20 molts, all with the triangular abdomen. Then they have the final molt to maturity, called the terminal molt, and the abdomen becomes round. Thats why you never see really large females with the triangle abdomen, or any carrying a sponge (because they aren't mature, so aren't reproductive) But, sometimes maturity can occur early (for unknown reason), or perhaps the crabs are molting very frequently but not growing much each molt, which can lead to really small mature females.

Have you shed many females that had the rounded flap before shedding? I know it can happen occasionally, but we typically assume its a fairly rare occurrence. I'll be the first to admit that there is a lot that scientists do not know about blue crabs (and many other animals). We really value the observations of people (like you) who make their living on the water and have spent their lives around the crabs. I actually enjoy hearing about people's observations that contradict what scientists currently believe is true- we learn a lot from those observations and they can improve our science and lead to new studies or discoveries. Thats why we try to work closely with the fishing industry. We're working with several commercial crabbers to tag the crabs. They allow one of our graduate students to ride along on their boat and tag crabs, and the students have really learned a lot on these trips.

viciousfishes
First off, let me clear up that I was a commercial shrimper only because the license said so. I spent 3-4 days a week during brown shrimp season and somewhat less time during white shrimp season dragging trawl. Had done this since I was about 6 with my dad.
I shed buster crabs when they came up in the trawl. How many females with the rounded flap, not sure but we did a few. I can tell you exactly how many busters we caught with the triangle flap. Zero. Never shed one of those.

I'll be very interested to read your findings when the study is finished. I'll be looking for it.
Reply

There is also a parasite that affects young male blue crabs. This parasite will round off the apron and give them a sponge feature.
Reply

viciousfishes
@chbaker
Good info!
Never too old to learn. I know I ask and talk a lot but that's because I'm interested. thanks for that tidbit!
Reply