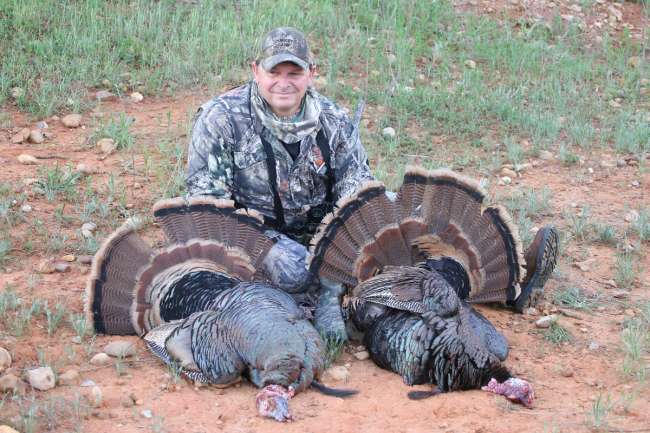 I made my first turkey hunting trip this year to south Texas this past weekend at a good friend's ranch. He has been seeing numerous turkeys on his place and invited me to come over and try my luck. I arrived in the late afternoon Thursday just in time to go do a quick look around and hopefully try and roost a few gobblers. I was not disappointed when I approached a huge cattle pasture and walked up on a big gobbler in full strut with a hen that were out around 300 yards from me. I quickly eased back into the tree line and sat down. The last hour before dark gave me a good showing of several mature gobblers, Jakes, and hens moving in and around the pasture. As dark approached I noticed several hens, jakes, and what appeared to be 4 long beard gobblers out at about 600 yards gathering up in the pasture right before going to roost. It was so cool to watch as the gobblers were strutting and you could hear the hens cutting up. As I watched them fly up I was already planning for the next morning setup. I noticed a nice ridge that ran from their roost location across the field into a small patch of woods. I figure that is where I would setup for the morning. Friday morning I woke to heavy thunderstorms and high winds. After checking the radar most of the heavy rain was staying north of me and moving away. So my buddy and I decided to head out and see what we can do with the turkeys we had roosted the night before. My buddy has no interest in turkey hunting but knows how much I enjoy it so it works out great as we can spend some time together hunting as he does the videoing and I do the shooting.

We drove out to the cow pasture a solid hour before day break, parked and walked to the area where I wanted to setup. The wind was howling so I had to put out the gobbler and hen decoy inside of some short brush so they would stay standing up. The gobbler decoy kept flapping so bad I decided to pull of the fan off of it as I was afraid it might spoke the turkeys more. My buddy was going to setup about 60 or so yards away where he would have a better vantage point to video. I setup about 30 yards from the decoys and was looking down the ridge that I thought the turkeys would approach once they came off of the roost. As day light approached I could not hear anything due to the heavy wind. The wind was blowing from my location towards the turkeys. I finally heard a gobbler and decided to try soft tree yelps but could not hear a reply. After a few more minutes I watched as the turkeys pitched out of the trees and landed in the pasture. I knew if I called load enough with the wind in my favor they would hear me. I was looking through my binoculars and could see 4 big gobbler strutting in the field while the hens milled around. I used my box call and made a few loud yelp and cackles, they all stopped and picked their heads up along with the hens. I knew they were locked onto my location so I made several more yelps and here they come! Several of the hens were in a dead run towards my location followed by the gobblers. The Jakes and a few other hens lagged behind but started heading in my direction. All of a sudden another turkey comes flying in from a tree line to my right. He lands and starts strutting, I am looking at him and he is another long beard so I have 5 long beards strutting and heading in my direction. As they get closer I make a few more yelps and clucks and I can start to hear them gobble now.

My buddy is about 60 yards or so from me and is enjoying the show and capturing some great video footage. As I am sitting on this ridge and looking down towards the flock of turkeys approaching me I lose count at somewhere around 20 turkeys. It's a site to behold and had my heart pumping like I had a 180 inch class buck walk up to me! I had picked out a barbwire fence and knew once they cleared that fence they would be under 40 yards from me. As the anticipation grew I was trying to figure out which gobbler was the better ones. I picked up my binoculars one more time and checked all gobblers out. By this time they are only about 150 yards out with several hen closing in at about 100 yards. They all looked pretty close in size except for one which had a very long beard more than the others. I let out a few more yelps and the hens were heading up the ridge and closing fast. Two gobblers and a few jakes right in tow behind the hens. The Three other long beards following but using more caution and not strutting anymore. The first group passed through the fence and was on my decoys before I even realized as I was watching the other three gobblers following behind. When I looked at my decoys I had two gobblers strutting all around my decoys and hens walking a clucking like crazy. The other gobblers shifted a little more over and put them right in front of me when they crossed the fence. So I am looking at about 20 turkeys all within 40 yards of me with five nice gobblers. I am trying to pick out a gobbler without hitting and hen or Jake. It is absolutely crazy at this point. I finally get my shot a one of the gobblers when he stopped strutting at about 30 yards. BOOM I let him have a load of Winchester XX #6 Turkey load from my Browning Gold 12 ga. 3 1/2' magnum. He flops over and starts his dead flop. One of the other Gobblers jumps on him and starts spurring him, so BOOM I shot that one. By this time turkeys are running everywhere and I lose track of the other gobblers. Once I located them they are on a dead run across the pasture so I decided not to take another shot. My buddy had videoed all the action but was on the wrong gobbler when I shot, but we have some outstanding footage and you can hear the shooting and see turkeys scattering everywhere.

I was pumped up when I walked up and put my hands on my gobblers. One had a 9 1/2' beard with 1 1/8' spurs while the other had a 7 1/2' beard with 1 1/16' spurs. When I slow down I will post the videos on YouTube under my screen name 'LETUMGROW'. I spent Friday afternoon and Saturday chasing more gobblers and shed hunting. I called in several more birds and have some great video which I will post on YouTube. I was looking for big mature gobblers and had Jakes mainly come in. I did call in another long beard with two Jakes and never could get in a clean shot and also called in what appeared to be a big gobbler by his fan but he had no beard on him at all.

My Turkey season has started of great with a Nice Gobbler from my place in Louisiana and these two nice Rio Gobblers. I'm headed back to Texas again this weekend and will be the cameraman for two close friends while they try to hang their tag on a big Rio Gobbler, then the following weekend back to south Texas as I try and fill my last two tags. Take care and hope you are enjoying the great outdoors this spring.
Reply

-Duckaholic-
Great story and a good time for sure. I've been in that exact situation a few times, it's hard to explain to no-turkey hunters. Unfortunately, this is the first year in nine years that I didn't get to make my annual 'Kids Turkey Hunt' in Texas. The oilfield is down so much that all of my friends that had leases let them go. I've been trolling LA Sportsman just to here a story! I'm so glad you posted. Keep it up.