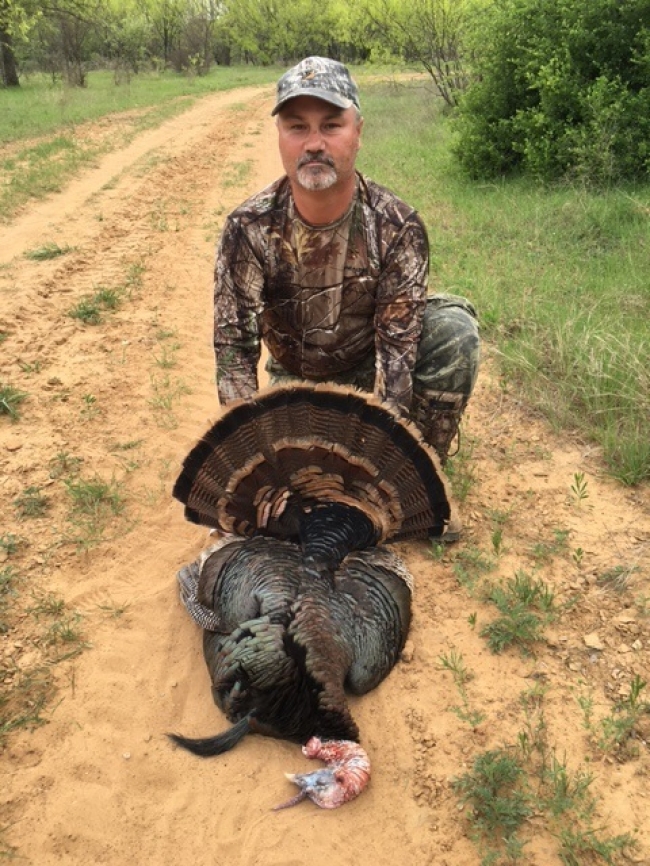 This past weekend I made my second trip to Texas for the spring turkey season. This trip I would be the cameraman, guide, and do some of the calling but not hunt. I would be videoing the hunt with two close friends Billy and David and wanted to try and get some great turkey hunting video footage and try to get Billy on his first Rio Gobbler. We would be hunting another friend of mines ranch in Palo Pinto County about 100 miles west of Dallas, Texas. He has a 2,600 acre place that has hardly if ever been spring turkey hunted. I had made a trip out to this ranch about a month back to help him shoot some hogs. When I was there I could not help but notice all the turkeys and how many mature Gobblers I was seeing. So we setup a date with the rancher to head back over and try our luck on the Gobblers.

The three of us arrived at the ranch just at dark on Thursday afternoon and tried to get a gobbler or two to sound off on the roost. We heard a few but could not nail down their exact location mainly due to wind.

Friday morning we decided to try an area along a big creek bottom which ran into a small cow pasture which my buddy who has the property told me he had been seeing plenty of turkeys in that area over the last few days. We eased into the cow pasture way before daylight and stood along the tree line and waited for the sound of a gobbler. It did not take long and as soon as the song birds started their morning ritual the gobblers started sounding off. We could hear 5 or 6 gobblers within 300-400 yards of our location and sounded like a few more farther away. We decided to split up and I would video David's hunt first while Billy moved to another location to try his luck. David and I picked out the closest Gobbler that was about 150 yards away and made our way next to the creek where he was roosted. We found a nice thicket along the fence line and decided to setup there. We put out one hen decoy in the cow pasture and sat down and waited. I let out a few soft tree yelps and got an immediate response. As more daylight came we could see a turkey in a tree not 60 yards from us. The turkey had a beard but was not gobbling. We could also hear a hen yelping and the gobbler gobbling only about 100 yards from us. I let out a few more tree yelps and got cut off every time by the gobbler. It did not take long and we could hear and see turkeys pitching out the trees. We sat for a few minutes and I let out a few yelps and got cut off again by the gobbler gobbling at my call. After a minute or two David noticed some movement on his side, he whispered that I see a hen entering the field, then here comes the gobbler in full strut! I could not move and only watch as the hen and gobbler moved closer to the decoy. I have my camera tripod on the opposite side that the turkeys are approaching on. I whisper to David that I cannot get the video camera around and to get ready to take the shoot. As he readies I let out a cluck with my mouth call and the turkey gobbles, BOOM David lets the Gobbler have it with his 10 gauge with Hevi-Shot Turkey load! Done, one gobbler down! We walk over and he has taken a very nice Gobbler, he had a 9 7/8' beard and 1 1/8' spurs.

Billy was on gobblers where he went and took a nice gobbler that had an 8 1/2' beard and 1 1/16' spurs. Friday afternoon I sat with Billy on the edge of a cow pasture while David hunted on his own. Billy and I set out 3 hen decoys and 1 gobbler decoy. We both started calling and after a short while got a gobbler to answer us, then another and another. Before dark fell we had 3 different gobblers answering us and had hens and jakes entering the field. We watched as a big mature Gobbler entered the field straight across from our location some 100 yards away. I started running my video camera and thought we would get some great action on film. As he drew closer one of the hens didn?t like something and let out her alarm call and flushed the entire flock out of the field. We sat tight and let things calm down and called some more. The gobblers would answer but none came back in the field. While this was going on David took a nice gobbler on his own. It had a 9 1/2' beard and 1 1/16' spurs. So we ended our first day with 3 very nice gobblers.

Saturday morning we headed back to the cow pasture with the creek and worked several gobblers but none would commit and we could here hens with the Gobblers. It was still awesome as the gobblers would answer just about every call we could throw at them! The skies were getting dark and I checked my phones radar app, it showed rain moving in and fast. We headed out and pretty much shut down our afternoon hunt.

Sunday morning we decided to try a new area as my buddy that has the property told us while he was working cows he heard several gobblers right at dark and one sounded like it was on crack (gobbling like crazy)! He said it gobbled steady till dark and was just going crazy gobbling. So with that info we made our way before daylight and setup on the edge of another cow pasture. As daylight came so did the Gobblers. We could hear several and one that was gobbling none stop. As we listened closer it was two gobblers sounding off together. They were about 400 yards out but we couldn't pass up on going after these two! As we headed in their direction we heard another gobbler closer. We setup on him but he shut down on us once he flew down. The entire time these other two gobblers are just going crazy gobbling at everything (crows, cows, owls, and other turkeys). We packed up and continued heading in their direction. As we drew closer we could tell they were moving. I told Billy and David we need to pick up the pace. After a very fast walk and closing the distance I made a few load cackles and yelps and was cut off by them. I made another series of calls and had them turned around and heading in our direction fast. We quickly dropped to our knees, I made another call and they answered and was closing fast! We didn't even have time to set out a decoy. By the time we sat down and I got my video camera ready I made another call and they were on us at a dead run! The first one stopped at about 15 yards and BOOM Billy rolled it with his 10 gauge loaded with Hevi-Shot turkey load. The second gobbler spun around and took off flying. We were all pumped up to have a fast and furious hunt unfold like that. We figured from the time they started gobbling till the time Billy shot we had heard them gobble over 300 times! I just wish I could have captured the audio of all that! I cannot remember ever hearing gobblers go that crazy. It's was like they were feeding off of each other! Billy's gobbler had an 8' beard and 1 1/8' spurs. What a way to finish up our weekend hunt! I've got some great video footage which I will post on my YouTube channel 'LETUMGROW' when I get some time after turkey season.
Reply