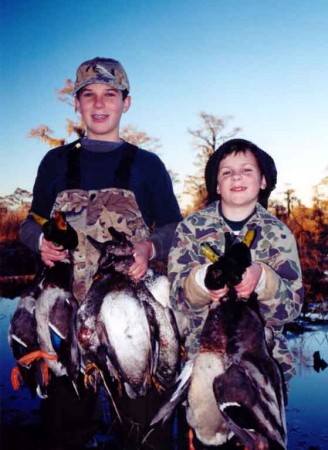 Has anyone hunted Manchac lately?
Thanks
Reply

Coot
I remember those days!
Too bad Manchac will never see those days ever again unless the LDWF stops the hunting pressure out there. Manchac should really be on a lottery or maybe only allow hunting 4 days a week. The ducks never have a chance to rest out there.
Reply

MEV
No Manchac Ducks for Me
Made four weekday hunts there till 1 pm so far this year and only shot one time. See very few birds. It's not the quality hunting area I remembered when I started hunting there in 1982. Now I just sit and wait and dream about the "good ole days" out there and past hunts with my Dad and then my sons. Only guys who have experienced the hunts back then can see the drastic difference. Now most public land is overhunted. I really feel bad for all the new guys just getting into the sport. I see all the new boats and gadgets and fancy high dollar automatic guns and wonder what the future will be for the sport. I don't keep any records or statistics of the past 40 seasons kills, but I do know that the last five years have been getting worst for me. I still enjoy the preparation, the early morning runs in the dark, the sunrise, and the hunt. Now Dad's too old to hunt, my boys have lost interest, but my dog still is willing to accompany me. I hunt southeast La. public areas except for one hunt a year in the Kaplan area on private land. Good luck!!
Reply

Coot
The duck hunting was so good
in Manchac back in the late 70's that as a child in Junior High we would simply walk in from the Rail Road Tracks to a small pot hole to shoot our limit (100 points) of mallards. We were still on a point system back then.

I quit hunting Manchac several years ago and the last time it produced well for me was in 1999-2001, but of course you could of killed ducks anywhere during those two seasons.

It is ashame, but the main reason why Manchac is not good anymore is because of HUNTING PRESSURE. You would think that with the LDWF check points and the biologists out there that the LDWF could figure this out. Even on weekdays, there are at least 10-20 blinds in the prairie alone! The LDWF needs to limit the # of days that we can hunt it and should at least go to a lottery on opening weekends of each split. LDWF should also set aside an area that is off limits to the hunters (such as Johnson Island at the Pearl River WMA) so that the ducks have a place to rest with out hunting pressure.

The other problem is that the area just doesn't hold the numbers of ducks as it once did. Back in the 70s and 80's there were areas like Garyville and the Reserve Canal area now Maurpeaus WMA, the Blind, Ticfaw, and Tangipahoa Rivers which had ample flooded cypress tree swamps with duck weed and not a single patch of hyacinth or salvania. These flooded timber areas use to hold very large numbers of mallards, gadwalls, and woodies, but since Salvania has taken over these areas they are just about void of ducks. There is no open water anymore in many of these flooded cypress tree swamps. Before the salvania took over, I use to hunt this timber and literally watch thousands of ducks leave the timber each morning at day break and then return between 9 and 11 in the morning. I firmly believe that the ducks that would use the flooded timber in the area would feed in areas such as Manchac and they would roost in the timber. Manchac has also lost many ducks over the last two decades due the decrease in the numbers of ducks in the timber surrounding Lake Maurpeaus. We can blame Salvania for this lost in our duck populations in our timber.
Reply

quack addict
hunted it this morning
there were about 3 boats in the prarie this morning. it has been horrible out there and last year was barely any better. each year it decreases. i pretty much just hunt the weekdays so i don't have to deal with all the idiots out there. i made the mistake of hunting there about a week ago on a sunday and it was mayhem, people runnin around the launch so they could be the first in the water, cuttin ya off when ya backin up ya boat, it's crazy
Reply

Charley
I never understood it
WHY do people still hunt there? I mean you can't use an outboard unless you want a serious paddle trip. It doesn't have hardly any Ducks in it, and it is a pretty far ride in the boat to the prairie and if you walk to potholes that's even harder!!
Never understood public land hunters, it is like they just stick with the first place they look at.
I hunt public lands and have scouted Joyce, Maurepas, Point-Aux-Cheins, Big Branch, Salvador, Pearl River, Biloxi Marsh and the Bonnet Carre Spillway. Let me just say Manchac would be my last pick. I wouldn't mind making a hunt in there just for old time memorries but then after I think twice about it NO WAY!!!
Reply