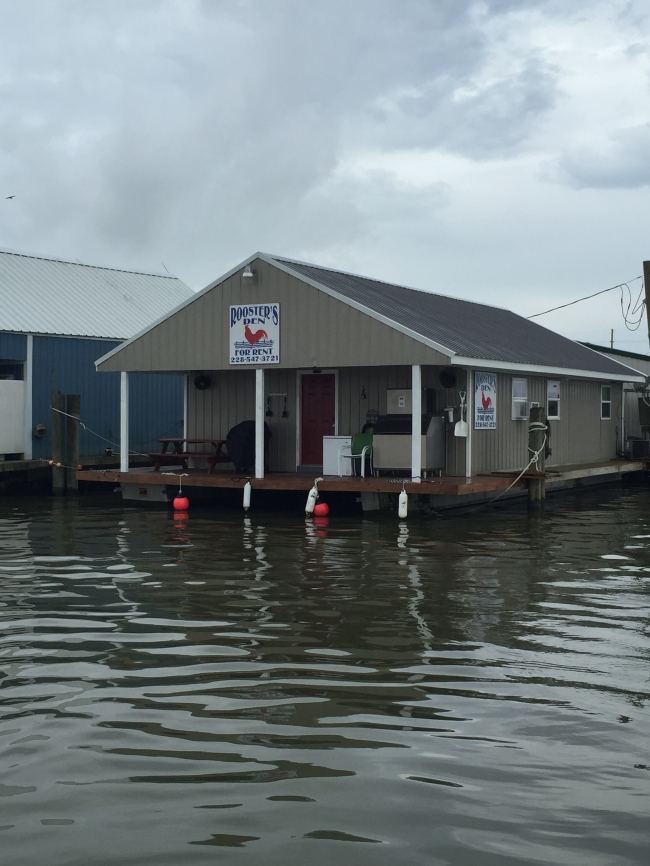 If you don't like long reports then skip this one. My good friends Brad, Tony and I (we are from central Louisiana but love saltwater fishing and go as much as we can) returned home Tuesday from a two night stay on a houseboat at the Venice Marina. For those of you that have not tried the houseboat thing, you don't know what you are missing. Fantastic experience. Nothing like loading everything in your boat and tying up to your front porch and unloading it and hopping in the boat the next morning. It doesn't get any better than that.

I brought my boat with us for us to fish in Monday morning and then we were scheduled to fish with Brandon Carter Tuesday morning. Monday morning the winds were forecast to be from the SW to W with a good chance of thunderstorms. We awoke to lots of cells to the south, directly east and southwest and it was really hard to say which way they were moving. I decided to make a long run up the river and cut through the Ostrica cut to the California/Black bay areas where I have had some luck on my own in the past.

We started out fishing the shorelines near California point but were not having any luck even though the water looked pretty good. After about 30-45 minutes I took a look at my GPS and noticed a waypoint about 5-6 miles out from our position and zoomed in on it and it was the Iron Banks. I remembered that I had entered this waypoint after reading an article in the Louisiana Sportsman about good fishing spots in this area. I believe Stone Island and a couple of other spots were included. The weather was holding to our south and the water was slick so I told my friends to reel in, we were going to give the Iron Banks a try.

When we arrived at the waypoint there were birds working all around it, shrimp jumping out of the water with trout on their tails and the water was the prettiest emerald green color. Initially we only caught a few and got hung up quite a bit, and I remembered the article warned about this. After about 30 minutes of trying all around the pilings I finally found the sweet spot and it was on like a chicken bone!

We had live shrimp and we caught probably 60% of the total on those under a cork, but we caught them on everything we threw. Matrix shad on jighead, double spec rigs, etc. We had multiple times when all three of us were hooked up and Brad caught two at a time several times on the spec rig he was throwing. The bigger trout actually were caught on the plastics.

While we were fishing everything from Buras to Main Pass looked like it was getting clobbered with storms and I started to worry about how we were getting back. My plan was to keep fishing while we could and then take cover at the Delta Marina at Empire until the storms petered out. Finally after number 67 came over the side (I had actually lost count and thought we had 70) it started looking nasty to the north so I decided to get the heck out of there even though the fish were still biting.

Everybody put their fishing gear up and then my GPS started blinking! I tried to start the motor and nothing! The battery was dead. The winds started picking up and I thought oh crap, one of the best fishing days ever was going to end up a disaster. We scrambled to remove one of the trolling batteries to use for a starting battery and I realized I had removed my tools last time I cleaned the boat and forgot to put them back in!!! We had to do all this battery change with nothing but my buddies fishing pliers. Finally got it hooked up and motor still completely dead. After about 20 minutes Brad finally realized that we had left one wire off the positive post. Motor started just in time, but we had quite a rough ride to the Ostrica cut. But it had taken so long that the storms from Buras to Venice had died off. We were able to make the ride back to Venice Marina and we never even got wet. The next morning the weather was just as bad or worse, so after a weather delay Captain Brandon gave us the option to reschedule, so we did. Thanks Brandon.

Ok, it's taken me two margaritas so far to write this report but I'm not done yet. I learned a lot on this trip like I always do. When we were at the houseboat, we discovered the guys next door were from Virginia and make 3-4 trips to Venice every year for fishing. When I asked one of them why, he said he can go on a fishing trip there and on a good day he might catch 3-4 16' redfish. His first trip to Venice with a guide he said that they caught 75 20' plus reds in one hour and that did it for him. We truly live in Sportsman's Paradise! I'm glad I was born in Louisiana!!!!

Louisiana Sportsman is the finest fishing and hunting publication in the world. Thanks for publishing articles like the one I got the Iron Banks coordinates from!

Quit bitching about the guide reports, I learned a lot from all the ones I've gone with and have made some good friends with a bunch of them, some who I haven't even fished with. Thanks especially to Marty, Travis and Brandon.

Ok, here is the craziest part of the whole trip. When we first arrived at the Iron Banks I made a cast with a double rig and was hooked to something big or a double, then it felt like I was hung. I kept pressure on and it eventually started coming in again but didn't feel like as strong a pull. It was only one 14' trout and half of my double rig had broken off. Toward the final few minutes we were fishing Brad caught a trout and said something like, 'I'll be damned, I caught this fish but neither of my baits are even in its mouth, one of my baits wrapped around some fishing line that is attached to a bait in this fish's mouth. It was the other half of my double rig that had hung up earlier. This is not a lie! Great fishing trip that I will always remember. Happy fishing Kenny LaCroix sorry if TLDR
Reply

Admiral Rabbit
...we hunted from a houseboat for a while...the beer bottles grew higher than 'da roof ??? after a few years it was dragged on top the bottles...it made a great foundation ???...our wall paper was all Playboy gate-folds (they now must be 60yrs old) ??? you made a great long-winded post ...cheers/beers and 'Booraeee'
Reply

KennyL
Long winded no doubt. The report is not a joke. All of this actually happened. It was a remarkable day that happens sometimes. I've been fortunate enough to experience days like this multiple times in my 59 years, but this one of the most memorable ever!
Reply

stormin norman
Sounds like you guys would have had a much better time if I were there to put you on more fish. Good trip, wish I were there!!!!
Reply

FEA111
Great real life report. Been fishibg 50 years and that is exactly how it happens.
Reply

Tony Taylor, Louisiana Sportsman
Nothing but love back to you! Glad you had a great trip and thanks for the real-life story.
Reply