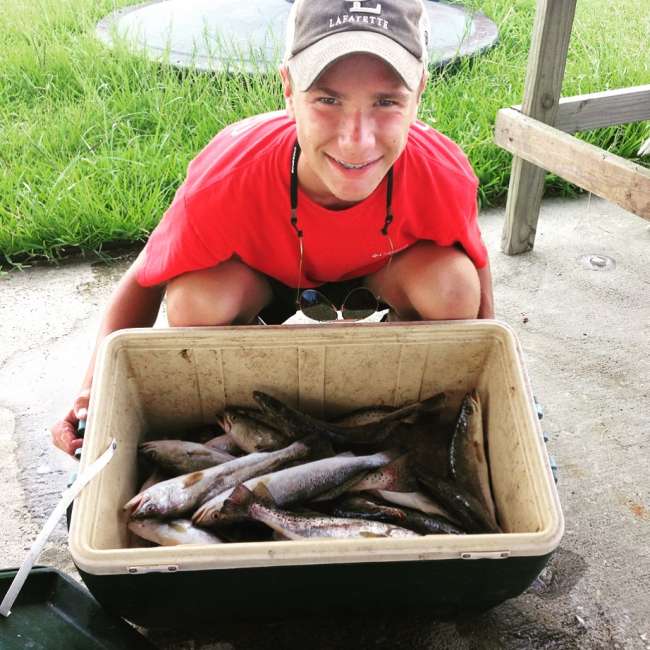 1st Photo: Sunday morning my grandfather, dad, and I decided we would make a quick fishing trip before the rain showers would hit us. Eventhough they had showers all around us, we didn't catch a single drop of rain. We stayed close to shore just incase a storm would pop up on us ,and we fished in Bay Negresse. Started off pretty slow but when the tide changed we started pulling in fish. Caught a total of 23 specks and 4 white trout. I caught most of my fish on a DOA chartreuse shrimp and my grandpa and dad used live cocahoe minnows under a popping cork.

Photo 2: That afternoon, 2 of my friends called me and asked if I wanted to fishing with them. Since the wind was picking up we decided to try for some redfish in the marshes. After an hour of doing that and not getting a single bite, we wanted to try for some trout. I knew Bay Negresse was going to be too rough so I told him to go to Bay Lucien. As soon as we got there the corks were going under water. Caught 21 White Trout and 9 Specks. All fish were caught on artificial (Vudu Shrimp and Matrix Shad).
Reply

rmelancon
Awesome post man!!!! We did well on Sunday afternoon in Sea Breeze too. We were all alone using artificial matrix shad as well. Ckn on chain, midnight mullet, and Fighting tiger H&H did the trick.
Reply

gramps
I am new at fishing Cocodrie, Are you fishing platforms, reefs or other structure? Any informillation you care to share will be very appreciated.
Gramps
Reply

rmelancon
Sea breeze is so open now, you just have to find them stacked up around the points when the water is moving. If you have a stiff SE wind, you can forget about it because the water gets bad quick. Most of the points will have some kind of reef at the end of terrebonne bayou (where the bayou used to be). It's mostly clam shell bottoms which are great for trout.
Reply