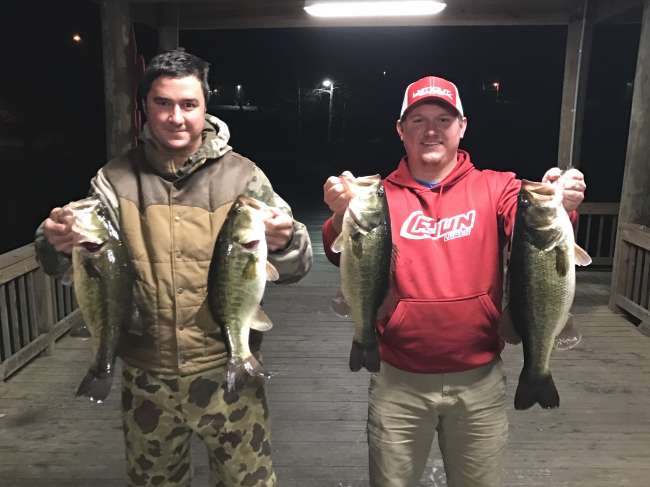 This past Friday Dec. 30th, we had a good trip on Toledo Bend. Low skies and very cloudy seemed to have the fish on the move. We were fishing the afternoon, just in time before the front moved in. We were fishing the south end of the lake. We started out fishing a small hump that came up to 4ft of water on the top and managed a few smaller ones. We then moved to shallower water to find ditches and channels that lead to spawning flats. At the first spot, On the first cast, I hooked up with a 3 pounder that came off at the boat due getting caught on my rub rail when I tried to flip it in. 2nd cast, I hooked up again, halfway to the boat the fish came unbuttoned on a Crawfish colored rattle trap. 3rd cast to that same spot resulted in a 5.98lb beautiful bass. My partner caught two more fish behind me each over 3.5lbs, using a Watermelon Red Swamp Swimmer. After that I boated another good fish on the trap. We weighed our best five fish and had a total of 18.5lbs.

We went back on the New Year's Day after the fog lifted to see if we could have another good day, but only managed one fish weighing 4.5lbs on a Poodoo Craw. The rest were 6' long baby bass. In the shallower water, we found temps right at 60 degrees. Could this mean the fish are getting close to spawning on Toledo? This is my favorite time of year to fish!
Reply

CaptJS
Been fishing TB this time of year for many of them. You can have the trip of a life time if you get the right weather. Have caught them on every cast one day then front passed and nothing I mean nothing. Bass don't like change and the weather in the spring changes with the fronts. If you can get several days and nights with warm temp. right before a front go for sure but after the first blue bird day etc. play golf.
Reply