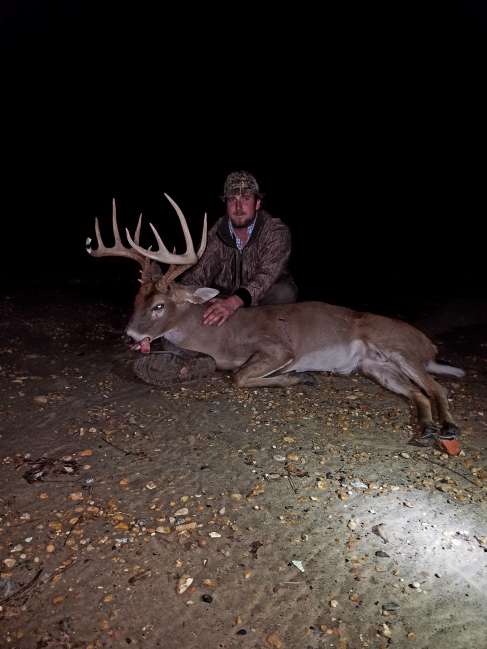 I had my cameras out since the middle of September. Trying to get an idea of the bucks on and around our farm. Had some nice ones.but nothing just spectacular.
On January 2nd. I went to check my cameras around lunch time. As I was thumbing through them I noticed a deer that really caught my eye. He was a big 10.he had passed through at 4:42 on the afternoon of December 30th I assumed was low to mid 150s.
I decided to hunt him that afternoon after checking my camera. I saw him right on time about 430 chasing does,he stayed at about 150 yards. Then as time went on the does decided to ease off,in the other direction of course. So my hunt was over for that afternoon.
The next morning I sat in the same stand.
Around 8:00 I saw the deer. He was crusing down the ridge right at me. He got within 80 yards.turned around and went the other direction..
That afternoon,Jan 3rd the wind swapped out of the west. West was completely wrong for the lock on I had been hunting in. So I got my Climber and adjusted for the wind to hunt him that afternoon.
Around 430 that afternoon I had the buck coming down the ridge right at me.all I could see was his horns stuck up through the cane. Watched him for a few minutes and he disappeared. Now keep in mind.. this was the 3rd time he had just disappeared. I didn't know if I'd ever see him again. He could have just walked out of my life forever,and that would have been it. So at that point I named him ghost.
So after he disappeared again. It felt like time was dragging on and on. The thought s I was having were eating me alive. Well around 5:10 I noticed a doe out of the corner of my eye to my left at 50 yards. Then noticed 2 more.well then ghost showed himself. He was 50 yards and downwind at that. It was do or die. I couldn't believe I had this many chances at a deer of this size. I shot him at 50 yards. He kicked and ran right at me. Closed the gap to about 20 yards and I got to see him go down right there. Ghost was done. He was a whopping 165 inches. Not including the 4 kickers off his bases.The whole time I assumed he was 150 ish. But I'm not complaining.
Reply