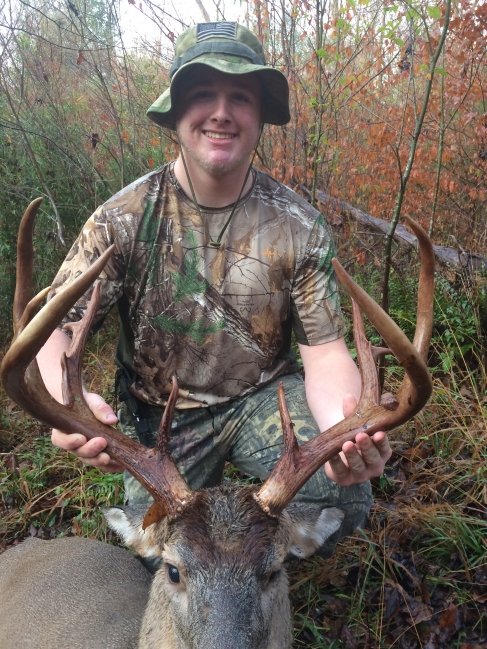 It was the third of January. My dad and I woke up at about 3:30 AM and headed to our hunting club in Jefferson County, just 87 acres of brier thickets and steep hills. It had stormed the night before and the fog was plentiful. We arrived at about 6:00 AM. We didn't want to cause any loud noises by riding the four wheeler, so he walked to his stand, and I walked to mine, about a 500 yard trek. The walk in was muddy and the ladder on my lean-to stand was slick from the morning dew. I sat down in my seat and loaded my rifle (300 Win Mag) and waited.
In this particular stand, I am about 20 feet from the ground and have a view of four different lanes along with a large opening to the right of the stand. I was in my stand for about 20 minutes before this deer came out. Usually when I get settled down, I look at every lane for about two minutes so I don't miss anything. I did this for the rest of the hunt. And it just so happened that I looked down the right lane at the right time. I saw him, he was standing in the middle of the farthest lane, gently moving into the bush where I wouldn't be able to see him. I came to believe that he had been chasing some does before I arrived. There was too much fog for me to see how many horns he had but I knew he was massive, one of the biggest I've seen. I thought,'Dang! I won't have enough time to get my gun up.' I was wrong. Within five seconds I had my gun up and pulled the trigger.
It was about a 180 yard shot. He didn't have a large body, weighed about 200 lbs give or take, but he had a large rack with 13 points. Within 20 minutes, I had killed a monster.
Reply