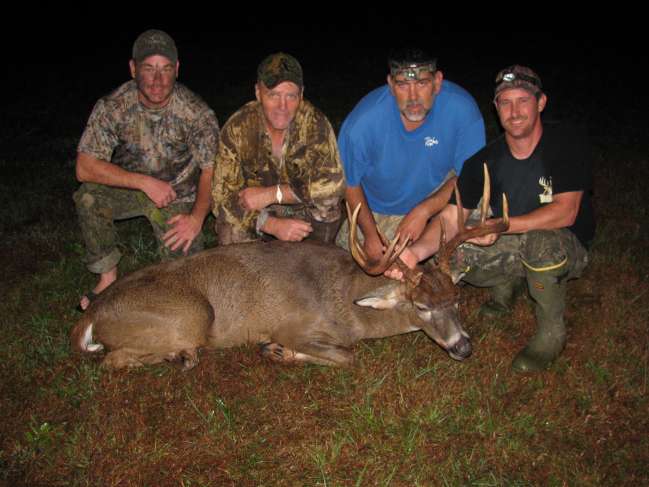 Made a trip to the Midwest to bowhunt some public land with a good friend and two of my uncles back in November. The weather was unseasonably hot for that time of the year, with most of the days having highs in the 70's. We scouted a ton, and put every bit of 50+ miles on our boots trying to find the best sign that we could put ourselves on.

About 4 days into our week long hunt, after seeing only a few deer, the weather was slated to change. We had a cold front approaching, with some severe weather that was supposed to pass through. I set out to hunt that I had hung, that was positioned perfectly to intercept a rut crazed buck looking for a hot doe. It was the edge of a cut cornfield, with several trails coming out from the very dense underbrush that was sure to be a big bucks bedding area. When I arrived at the stand, there was a fresh thigh sized rub 20 yards behind my loc on. I had a good feeling about that evenings hunt. Later that afternoon, the skies got dark and I knew the rain was not far behind. I did not bring my rain gear with me, knowing that it would be in the mid 70's again that afternoon, I didn't mind getting a little wet.

The rain came and went, all within about a fifteen minute time span. After the rain rolled through, it was as if the woods just smelt fresh. This was the first rain that the area had seen in weeks, so I knew that the bucks would be on their feet freshening up their scrapes.

Right before dark, I start gathering up my things to make the long walk back to the truck, until something caught my attention. I could hear something walking in the thicket behind me, and it was heading my way. I stood up and got ready, because I knew that it would have to pass within 12 yards of me to come out into the field edge. Sure enough, he walks out just yards from me, and I can tell that he was a good one. I made the decision to go ahead and fill my tag on him. I drew back, stopped him, and let the arrow fly. Upon impact, he hit the ground. I hit him a tad high, and caught his spine. I finished him off with another arrow, and began to praise God for the blessing that I had just received. After many miles of scouting and long days of hunting, I had taken the biggest buck of my life. To make it even better, I had taken him with my bow, and on public land.