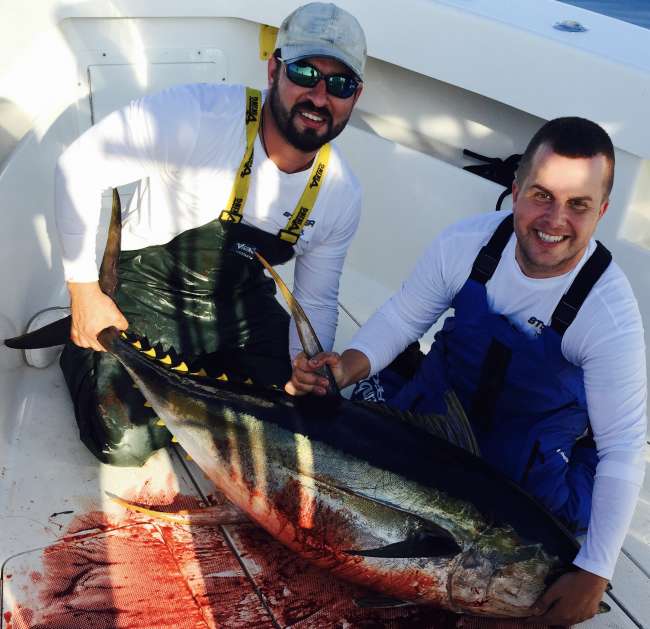 We were able to make our second trip of the year on Saturday 2-3-17 out of our home base in Venice. We started heading down the river by 5 am. After a 2 hr run we arrived at the targeted Boat Show. Started off a little slow with only (1)90Lb Yellowfin coming in the boat off of a chuck of red meat, we were marking fish but they were down between 150-200 ft. We made a few more drifts and started catching a few AJ'S on the 250 gram flat sided vertical jigs. From 9am -1pm it was pretty slow with the tuna we just kept chumming and drifting free-lines without much luck. Around 2pm the cold front hit with rain and 2-3 ft seas, we stuck it out and was rewarded for doing so. Most of the boats had bugged out. We had some big marks down at 150' so the chumming was slowly bringing them up. Had a few more grab our free line but didn't get a hook on em. With time running against us at this point, we dropped our chucks down with 8oz bank sinkers (the rubber-band rig)and had an immediate hook up that was a solid fish 100lb yellow. We got him in the boat repositioned and then dropped down again and 'BAM' hooked our biggest fish of the day, had to bear down on him with more drag before he spooled us, should have dropped the weighted rig earlier in the day.

Overall we were happy with the trip. Ended up with (3) 90-120lb yellowfin and 4 AJ's a few of them were a solid 40lbs and a few Beeliners. All of the tuna were caught on free-lined chucks and the AJ'S and Beeliners were caught on our 250 Gram Falt Sided vertical Jigs. Beautiful morning to be on the water with 1' seas essentially the entire morning thru lunch time with solid 3 footers from 2:30 pm till dark due to the cold front, everyone got back safe and sound. Will do it again soon.