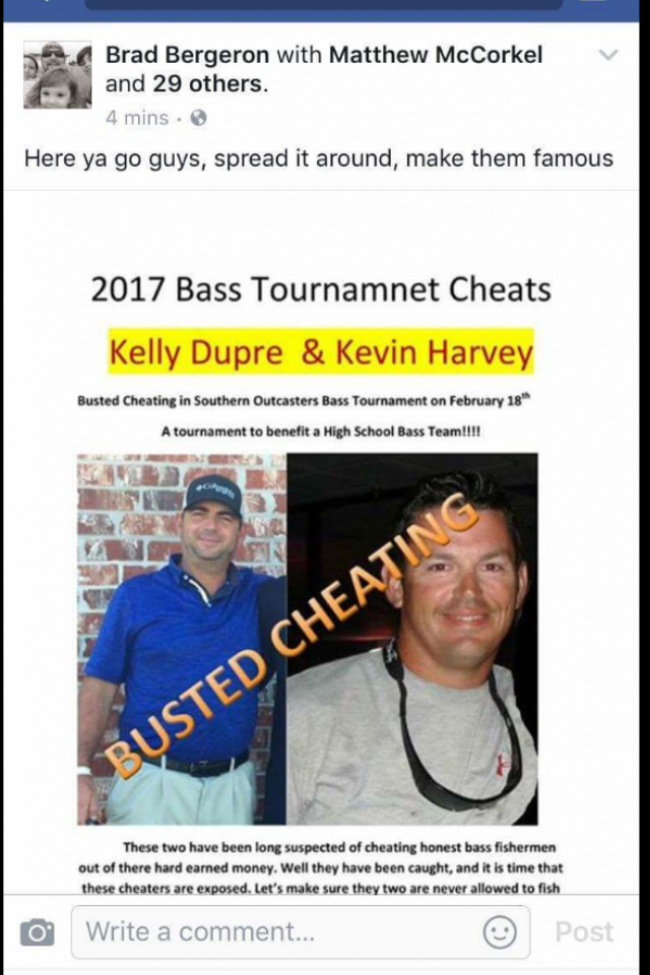 all you tourny fisherman might want to check this out
Reply

tmwill811
Id like to read a little back story. In what form or fashion were they cheating and how were they caught?
Reply

GI-Islander
Where are these alleged cheaters from? What local high school fundraiser? More info needed!!
Reply

the dredger
houma area, they had fish in a fish basket in posted canal ( union oil canal) alot of people suspected them of cheating in previous tourniments but didnt have proof .. so one of club leaders followed them to the canal and watched them come out !!!
Reply

Trigger Happy
Exactly right!! They were fishing a tournament out of bayou black and fished an off limits area that they knew was off limits!
Reply

K_harvey
Here is the truth! The tournament started around 6:45 and my partner mentioned that he had to go bring his Coworkers a lap top so that they could do their daily morning report for work. Which he was supposed to leave it at his office the day before. My partners office is located off the intercostal waterway (Union Oil canal). Really didn't think anything of it at the time. We pulled up to the office and were there for maybe 2 minutes. During that time, there was another tournament boat that passed me while sitting in my bass boat at dock heading to the back of location canal (private canal). We left and were spotted coming out of the canal at 7:05(is what the tournament official said) heading to legal fishing waters. Fished all day then headed back for 3:00pm weigh in. My partner Kelly was asked immediately by the tournament official did we go in Union Oil canal today. His answer was YES. Then the tournament official said we were Disqualified and went on saying exactly when and where we were seen coming out of Union Oil at 7:05, which was true. Not to mention we did not collect any monies, much less have enough weight to collect any monies at all from this tournament. Before the tournament started my partner donated $100.00 to the tournament director for the cause and would have donated monies back if we would have won. All these comments about having fish in baskets for tournaments is false! We've been blasted over social media and are pursuing legal actions.....
This guy that started all this didn't even fish this tournament much less know the tournament director. On his police report he claimed he fished the tournament and invested a $250.00 entry fee. Which is a lie entry fee was $30.00 per person with an option of $10.00 for big bass. He was also caught on surveillance at local gas stations putting up flyers labeling us as cheaters! We broke tournament rules and we were confronted and told the truth, resulting in a DQ, end of story.

Sorry if I offended anyone within this tournament while chasing a passion that started as a kid....Fishing!

AnonymousBassFisher
Cheat, this guy and his partner are cheaters. He is trying to cover his butt with more lies. I know all parties involved and this guy got caught. He cheated! He and his partner have been accused many times, have been caught in rodeos and even bow fishing tournaments. But now they have finally been caught in a bass tournament by several people who set up a sting operation to catch them.

So let's look at his facts.... The 'Iforgot my laptop' is the same excuses these guys use for every tournament that they fish in these private canals. He is saying that they just stopped by the office which is a lie.... The guys who caught them were waiting at 'his office' when they came running back to the front from out of sight passed 'his office'.

The person that he says started this... fished two prior tournaments, in the past couple weeks, that were won by these two. They were suspected of cheating for those (will explain more below). This person also did not post anything at local gas stations, I know the person that did and they know how these guys cheat...so good get the news out about these guys ruining our sport.

So.....Want to know how they set up the sting? They have been watching them cheat and win the last two tournaments they fished in. They knew where to sit and where to watch and knew exactly what these two would do. They caught them and reported them to one of the tournament directors whom was also in on the sting. Busted!

Kevin also accidentally told the tournament director that he entered the off limits canal to fish in a later phone conversation. This director will testify to this by the way. He also admitted to another source that he only caught one fish back there that morning....

Also at least one of these guys work in the canals they were cheating in!!!!! He kicks people out of the private canal and is allowed to fish it him self by the company he works for. That's right he fishes these private waters and kicks everyone else out! So they both absolutely know that the canals are off limits to the public beings that they themselves kick people out.

Don't believe a word that come out of this liars mouth!!!!!

PS..... Ask if you need more details. As I said I know all parties involved.
Reply

Steve christ
Come on Guys grow up and be men,
Reply

Tony Taylor, Louisiana Sportsman
This post is being locked down. Sounds like legal issues that need to be investigated? This is not the place.We look forward to reporting the truth when available.
Reply

Pontchartrain Specs, Redfish, Anything...(looking for advice)
Nuck and Futz Hunt 12 3 2020
Nephews from NYC Shoot Their First Hogs
Looking for a deckhand to work up to Captain in team.
Rainy Day Specks