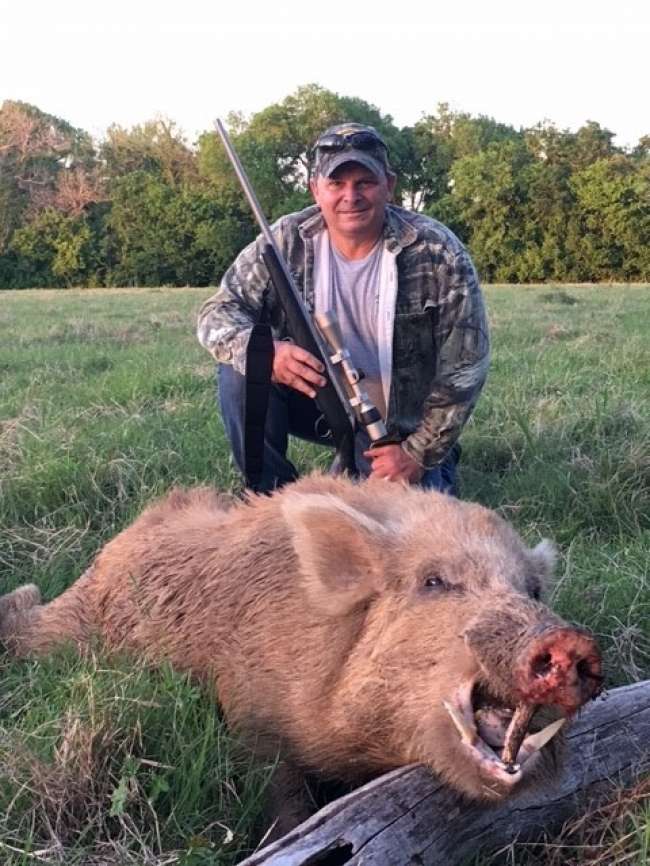 I just completed my first trip to south Texas for this springs turkey season this past weekend. As always I was not disappointed chasing those Rio Gobblers and Hogs. I arrived in time to make a quick scouting trip on several ranches that I had permission to hunt on. My good friend had trail cameras set out and we had a good idea as to what ranches had the best turkey population. We set out a ground blind on the ranch that had the best opportunity for big gobblers.
He also showed me pics of a big blonde boar hog that was coming to one of his deer feeders consistently every afternoon and asked if I wanted to try and get him. I said sure and the big boar looked really cool in the trail cam pics. So Friday afternoon we setup in a ground blind about 150 yards from the feeder and sure enough like clockwork the big boar showed up. I gave him time to settle down and start feeding then I let the cross hairs settle on the side of his head and squeezed the shot off. The big boar dropped in his tracks. We had no scales but figure he was in the 250 pound class.
Saturday morning we headed out way before day light and I set out my gobbler and hen decoy on the edge of a cow pasture close to where we had set up the ground blind the day before. We climbed into the ground blind and waited for day break to come. As soon as the song birds started we heard what sounded like two or three gobblers on the roost about 300 yards away and across the cow pasture from us. I let out a few tree yelps with my mouth call and got an immediate reply. We sat tight and as soon as I heard them fly down I started calling to them. They would gobble and I would call, this went on for several minutes and I could not see them due to the way the cow pasture was laid out. I could tell that they were coming in closer so I backed down on my calling and just gave out a few purrs and clucks. My buddy was running the video camera and we had decided we would look over any gobblers that came in and try to take the better ones. After about 10-15 minutes a Jake showed up along with a few hens. They seemed a little nervous with my hen and gobbler decoy close buy but didn’t run off. Shortly after that I watched as 4 big long beards came into view all strutting and walking straight towards the gobbler decoy. I picked the best gobbler out and waited for the shoot. BOOM he rolled and I went for another, BOOM another one rolled. I had two nice gobbler down and the other two was jumping on the ones that I had just shoot. We kept videoing and watched as the other two gobblers just went crazy attacking the two gobblers that had been shot. We finally emerged from the blind and went and checked out my two gobblers. One had a 9 ½” beard with 1 3/8” spurs and the other had an 8 ½” beard with 1 1/8” spurs. I tagged the turkeys and picked up our gear and headed for another ranch to see if we could get another gobbler fired up.
We rode over to the ranch I had shot the big boar hog the afternoon before and checked out one of his hog traps on the way in. While fooling around with the hog trap we heard a gobbler sound off about 400 yards away, I quickly grabbed my gear and ran down the edge of the cow pasture for about 100 yards trying to cut the distance. I was out of breath so I took out my box call and made several yelps and got a reply from the gobbler. I then eased into the wood line and found a good spot to setup. I took out my mouth call and started working on him. Every time I would call he would answer and he was getting closer. When he got to about 75 yards I shut up. I could not see him but knew he was getting very close and I didn’t want him to know exactly what tree I was sitting by. There was this dead silence in the woods as I waited for him to appear. After about 5 minutes I picked him up walking down a fence row head straight towards me to my right. We he went behind a clump of brush I eased my gun around to catch him when he came out the other side only 25 yards from me. When he cleared the brush I clucked and he froze with his head fully extended, BOOM I let him eat a load of 12 gauge 3 ½ #6’s. This big Gobbler had an 11” beard with 1/ ¼” spurs. What a way to start off my Texas turkey season with 3 big gobblers on the first day of my hunt. I hope to get back down to south Texas in a few weeks and try and finish filling my last Turkey Tag. We took some great video footage of both the big boar hog and the turkeys which I will post when I get some time after turkey season.
Reply

-Duckaholic-
Great hunt! you've got to love Texas! I can't wait to get back on those Rios...
Reply 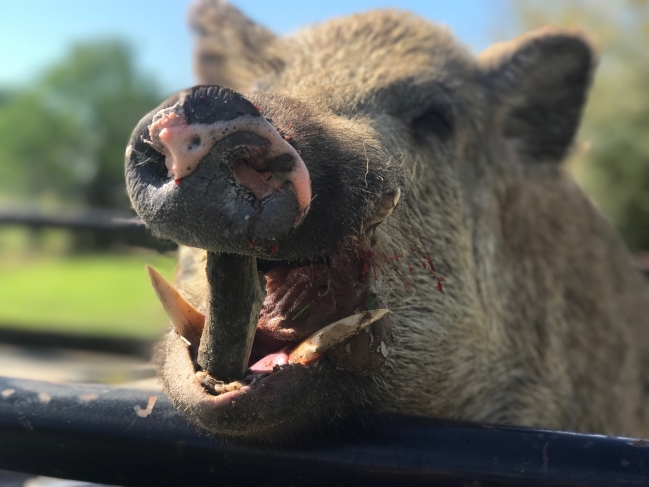 Well, my South Texas trip got cancelled but I made a hunt here at home and busted this nice trophy..
Reply

LETUMGROW
Nice boar duckaholic, sorry your trip got canceled. I’m going back to Texas this Wednesday heading west of Dallas near Santo to try my luck on some Rio’s. Last year we had a blast on this ranch and took 4 nice big gobblers. Get in touch with me if you would be interested on a trip if yours gets canceled again.
Reply 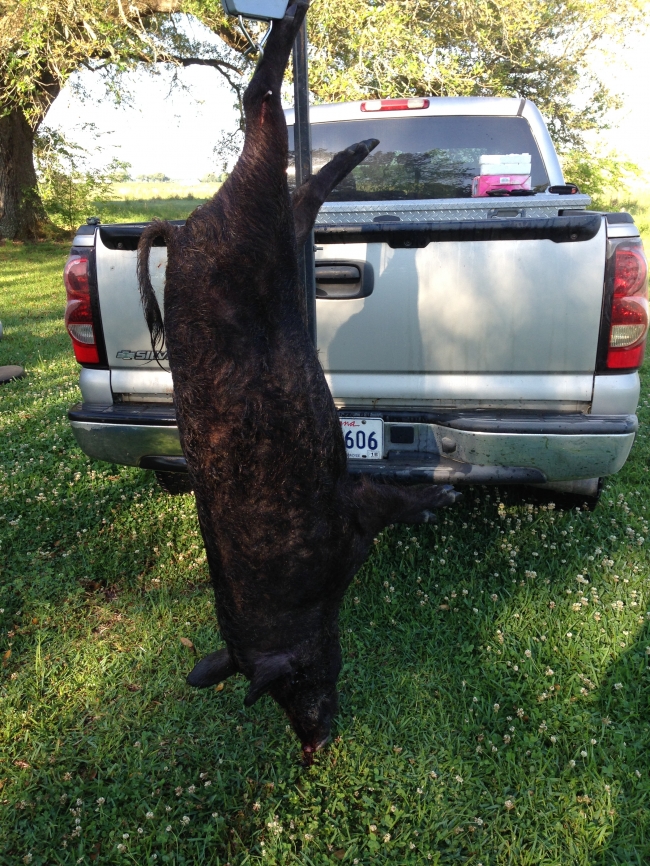 Thanks Chris, good luck! I can't wait to hear the stories and see the pics! Got another hog this weekend. ;)
Reply