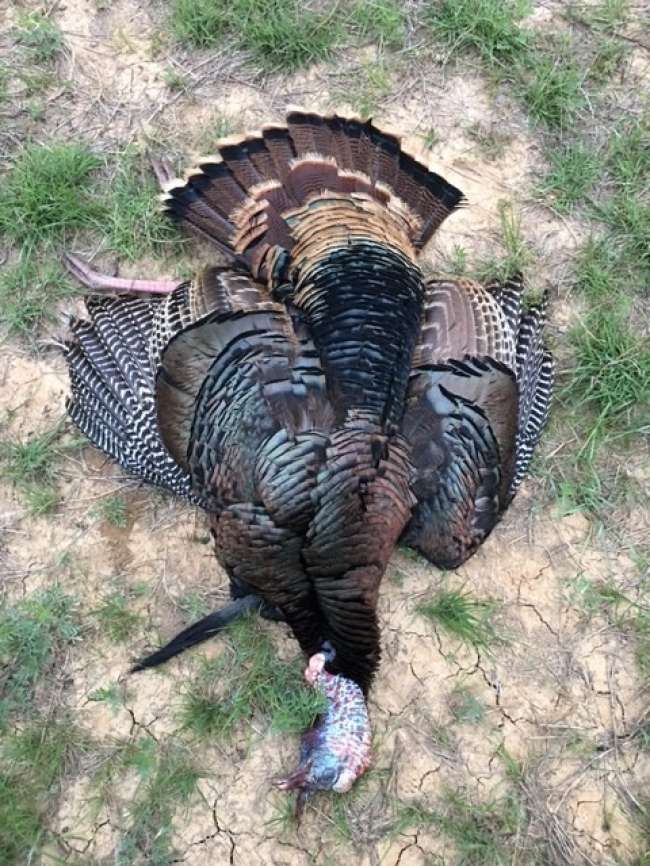 Just returned from my second turkey hunting trip this spring season in Texas over the Easter weekend. I was invited to a ranch about 100 miles west of Dallas Texas in Palo Pinto County. I have hunted this ranch before and there are lots of turkeys and big mature gobblers in this area. I arrived along with two other friends on Wednesday afternoon in time to make a late evening hunt and hopefully call one in or roost one for the following morning. The wind was pretty stiff but I did manage to call in two young gobblers which I videoed with my phone and one hen, I also heard another gobbler in the distance but never could locate him at dark. My two buddies were hunting in different locations on the ranch and one of them was able to roost three different gobblers. So the next morning we split up and tried to get on these gobblers. I made my way to where he had heard one of the gobblers on the roost the afternoon before. I know this ranch so I kind of knew about where this gobbler would be roosted at. There was a nice size lake with big trees on the dam end so I figured the gobbler would be in that general area. I eased into the area and waited for day break. As the birds started singing so did the gobbler. He was only about 200 yards from where I had stopped to listen for him and he was exactly where I thought he would be. I slowly made my way closer and found a good spot to setup which put me about 100 or so yards from his location. I settled in and made a few soft tree yelps which set him off gobbling. After a few minutes I heard a hen start calling to him while still on the roost. He would gobble at her and I would call and he would gobble at me. After about 5 minutes of this action I heard as a turkey pitched out of a tree and landed only about 20 yards in front of me. It was a hen that I never knew was there. Then a second one, third one, and a fourth hen landed out in front of me. I froze as the hens started walking away. The gobbler by this time was gobbling at everything, crows, songbirds, and owls. I let the hens get about 50-60 yards away and I made a few more soft yelps at the gobbler and he fired back which seemed to make the leaves on the nearby trees rattle! One of the hens then started calling to him and he would answer her. It was so cool to be this close and hear his thunderous gobble and see all of this unfold. He finally pitched out of the tree and landed in an old road bed about 80 yards from me and went into a full strut. I then unleashed a volley of cuts and cackles which made him crazy as he gobbled his head off and was strutting straight in my direction. About this time one of the hens which was about 50 or so yards away from me started calling at him. He would come out of his strut look over at the 4 hens and then look for me. He would then go back into his strut and start wobbling in the direction of the hens. I would cut and cackle at him and he would start moving in my direction. This went on for several minutes and he was slowly getting closer. He kept looking for me and was checking out the four hens off to his side. When he got to about 50 yards he came out of his strut and stood up looking for me. After a few seconds of not seeing a hen in my direction he turned and started walking towards the four hens and went back into a full strut. At that time I decided it was now or never and gave out a loud cluck with my mouth call which froze him and made him pick up his head. BOOM I let him have it with my Browning Gold 12 gauge 3 ½ inch number 6 turkey load. He rolled and I had a great gobbler on the ground. He had a 10 inch beard and 1 1/16 inch spurs. I was so pumped up just to have witnessed this kind of action was just awesome!
My other two buddies each had opportunities but one missed and one got his gobbler. Man I love hunting these Rio Gobblers, lots of fun and plenty of action!
Reply