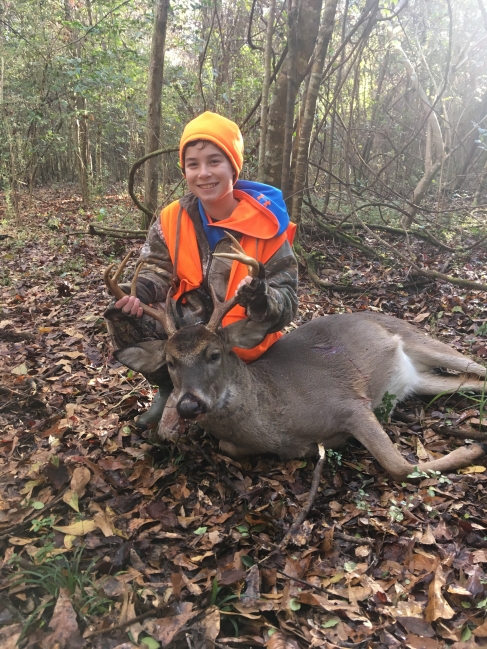 Congrats to my little buddy on a nice buck taken from Pearl River WMA.
Reply

Steelsprayer
Congrats on the public land buck. Are they chasing does yet in the Pearl? Not chasing yet in tunica, maybe next month.
Reply

LastCast
It seems like the rut is wide open in the Pearl. Seen a big increase in fresh rubs and scrapes just in the last week. Haven't seen any does lately to be chased. That being said, this buck was reworking a scrape when my son shot him.
Reply

Huckleberry
That's a mighty fine buck LastCast, and a fine looking young man. Congratulations to you both.
Reply

LastCast
Thanks for all the replies. Its been many, many years since I've hunted public land. From the time I was about 12 throughout my teen years my father took me to Pearl River, Bohemia and Jackson Bienville WMAs. We never got any 'wall hangers' but were always took a deer or two year after year. Not to mention squirrels and rabbits. I enjoyed spending long days walking around the woods with my dad. Harvesting an animal was icing on the cake, no matter the size. Up until last year I hunted nothing but a club in Mississippi since those days with my father. It was fun and family oriented but consisted of sitting in box stands staring at food plots. Yes we harvested quite a few 'wall hangers', but nothing felt as earned as deer taken on public land with my father. I had enough of the bickering and drama that comes with being in a club and got out last year. I started taking my kids on public land this fall and have enjoyed every second with them just like when my dad used to take me. The challenge of putting my son in position to be able to harvest a buck on public land, not to mention Pearl River, was so rewarding for both of us, I don't know if we'll ever go back to being in a club. Merry Christmas and good luck to everyone for the rest of the season.
Reply

Mandevillian
LastCast,First things first,Merry Christmas and Happy and Prosperous New Year to you and your family and congrats to your son,what a fine deer and Public Land,and Honey Island Swamp WMA,to boot!!I hunt the Pearl but mainly when deer season not underway and for tree rats and took a Medicare Client with me recently.I routinely used to spook some fine racked deer and had thick 6 point stand his ground and try to get me to make the first move and all I did was shoulder my Beretta and he decided I was gonna win dat stand-off!!I do hunt a family-oriented deer club but have duck fever so bad,hard to shake it and should as this may go down as worst duck season in my 20 plus years of duck hunting and getting frustrating but keep after it and should hit club stand soon as everyone that I know that hunts deer says the week between Christmas and New Year is prime time to target rutting bucks!!Awesome deer!!