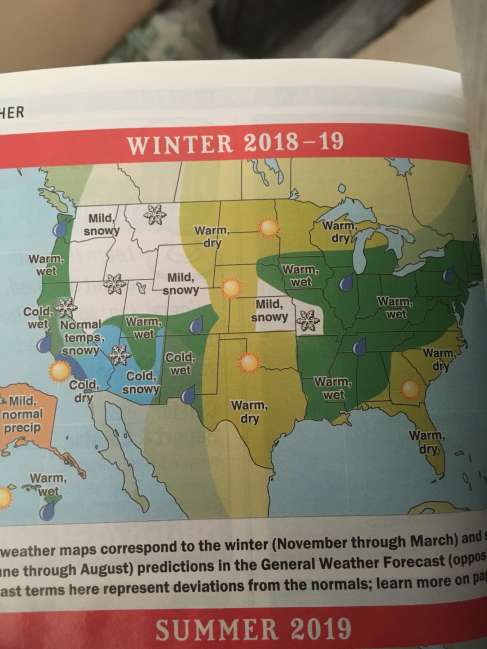 picked up a farmers almanac recently and found this map in there. Seems to coincide with the lack of migrating ducks. I know thereâ€™s more to it than that but weather is an important piece of the puzzle. if I was a duck and had all the food I wanted and access to it year round, why the heck would I fly thousands of miles south? Just my 2 cents
Reply

Delta Duckman
There is one other piece to the puzzle, aerial surveys up the line telling us there are less ducks than years before. Less ducks and the map above are indicative of the results we are getting, it is that simple.
Reply

Mandevillian
Last Cast,Add to the equation altered agricultural practices way up N and if a duck has scattered corn and no reason to head S,why would he or she risk getting nailed by tons of guys waiting in their blinds,hoping for a migration dat aint gonna ever happen like it used to!!Hard to believe our local marsh,just last year,chock full of fat mallards,has so few this year and doubt Arkansas has many and neither do states bordering Arkansas.Bet folks in Dakotas having some banner mallard and gadwall harvests!!!Was ton of fun fishing with ya yesterday,even though we caught zip,other than dat crab ya caught!!!Hoping to get you and your son on some greenies in local Marsh!!!

LastCast
Delta Duckman I havenâ€™t duck hunted since 2002 but have been contemplating it recently for my sonâ€™s sake. I fish Delacroix/Reggio/Lake Borgne areas and watched the duck numbers dwindling to what I would call pathetic today. I hunted these areas from the time I was a young boy in the 80s till 2002. Iâ€™m not going to try and say we always limited and sure some years were better than others but I cannot ever remember getting skunked or even coming close. There were always ducks somewhere. You may have had to move where they wanted to be but they were somewhere. I couldnâ€™t say that today. Your post got me thinking and I did something Iâ€™ve never done before. Went on USFWS website and looked through the survey reports that date back to 1999. Per these reports in 2002 the year I stopped duck hunting there were 31.2 million birds. In the late 90s and early 2000â€™s we shot the heck out of ducks in Delacroix. The 2018 report shows 41.2 million birds. Thatâ€™s a 10 million bird increase over the numbers of ducks when I last hunted. Yet if we went for a boat ride today weâ€™d be lucky to see a few ducks and half of them will be mottled ducks. I think it was the 2014 survey that peaked the duck numbers around 49 million. So yes they have declined from 2014 till now but no where near as low as when I used to hunt them and did so well. Call it climate change call it short stopping call it whatever but in my opinion I believe we are witnessing a permanent change in waterfowl migration.
Reply

Kgt 1067
we are having some green smashing this year south ms and north ms . Last year we had no water Natchez river stage last year was 28ft and lower . We have been with a steady rise all season and getting deeper in water and ducks . Last year they passed us went straight to you guys so we felt the pain last year no doubt . But was glad to see you guys had a great season but just my two cents when we have no water then get ready there coming but when Natchez river stage is above letâ€™s say 40 ft then there gonna stop by some of our full water holes and when they stop here they get shot at pretty good and most donâ€™t make the flight out. Good luck guys hopefully some will come down before season ends.
Reply

Mandevillian
Heard some shooting today vs relatively little shooting and Bayoubob and I chatted with two sets of hunters dat had a drake scaup between them,how bad is dat,and neither he nor I have fired a shot in quite a few hunts!!!Debating upon taking Last Cast and his son to local marsh vs their fine private land and he and I were in fairly close contact,via texts today,and I might just have to do me some exploring,not necessarily this year,but next year,possibly heading to Yancey as timber hunts always seemed like a good idea.I actually hit an area in local marsh that looked a lot like timber with ole cypress trees in it and probably shoulda done me some more exploring Wed but de ole body about worn-out from early wake-up calls,long paddles,and MT skies!!!Hope to finish duck season strong and will be chasing redfish soon enough!! 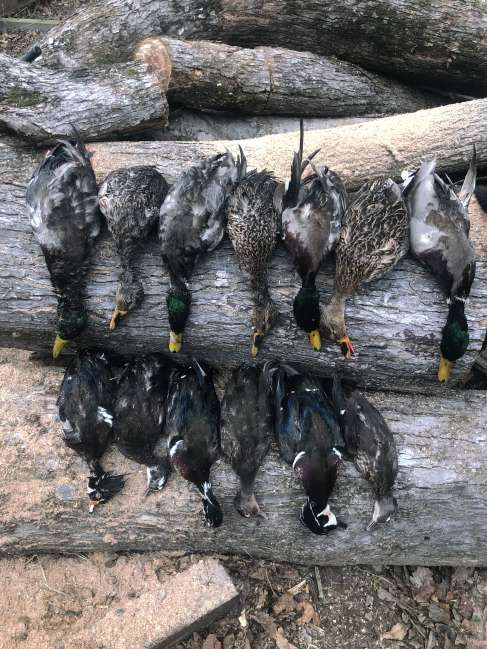 Explore the ms river When you donâ€™t see many in your normal spots get close to the river tons of islands and pockets to get in they fly the river all day on sunny days. Had a decent little hunt in the river the other day .
Reply

Mandevillian
Awesome hunt,no doubt and guess ya gotta make lemonade when ya get dealt lemons and love dat nice bag of ducks!!Did see some ducks,they were just in the stratosphere and even my DC Countdown 2.0 in polycarbonate won't get dey attention!!!Congrats on mighty-fine hunt!!!Last Cast hit Honey Island Swamp today but did not have any luck but he texted me saying they heard lotta woodies!!!