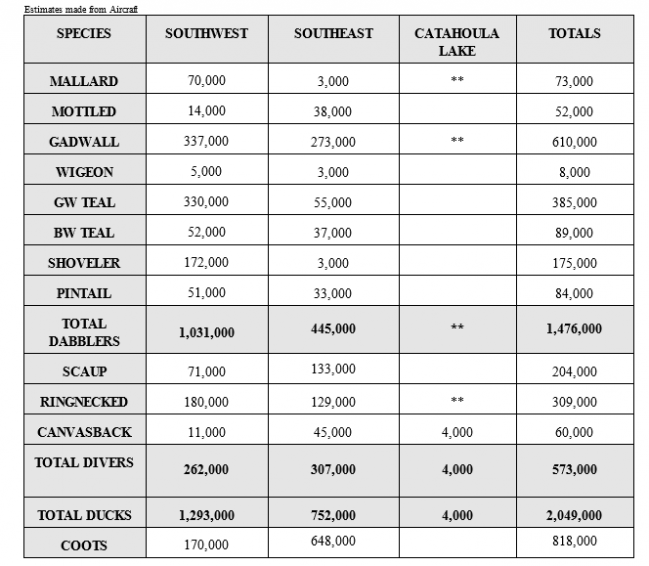 Mandevillian
Re: Aerial Duck Survey January 2019
Kinda doubt very seriously the accuracy of the gadwall numbers,particularly for SE area as not sure anyone hunting the SE portion of Sportsman's Paradise(used to be accurate moniker)has seen any appreciable numbers of gadwalls.Oh well,this season about in de books,time to have amnesia and get over perhaps the weakest of weak seasons in my 20 plus years of chasing ducks and Last Cast and I were hoping to make a hunt in Pecan Island,have not yet gotten confirmation(probably good thing as perhaps their season has dwindled down to nothing more than scaup,thanks but no thanks)and might just have to endure a few more days of 'MT Skies' in my local marsh.Turkey Season and sac a lait and specks and reds gotta make up for this miserable duck season!!!Good luck and hate to cast doubt on data BUT!!!

lanco1
Re: Aerial Duck Survey January 2019
There are grays around. But man are they spooky. If you aren't on the X forget it. Had multiple flocks totaling maybe 60 or so blow me off Saturday. And there are large congregations spending the day in outer bays. Go ride old Spanish trail by the Fritchie marsh there were several hundred in there on private ground when I passed. SELA can swallow a bunch of ducks and we can still have a crap season if it's all older educated birds. Killed 9 teal and a redhead yesterday, hunting a walk in only pond. Might squeeze an evening hunt in Saturday PM before its all done in the coastal zone. Next year will be better, more water on the breeding grounds and a high survival rate this winter.
Reply

Mandevillian
Re: Aerial Duck Survey January 2019
lanco1,Thanks for the heads up,used to paddle the Fritchie Marsh quite a few years ago,about the time it got added to Big Branch and we used to have some decent hunts out there til the divers,particularly scaup took over.Might just have to make a hunt or two out there and was hoping against hope that Last Cast and I would be making a nice trip to Pecan Island this Saturday but does not look like dat in de cards and tomorrow's weather forecast,at least by my last check of WUnderground,was not looking too favorable with strong S,SSW winds not conducive to entering marsh via Lake P and persistent thunderstorms from about launch time til noon aint looking that great as well.Might sleep in,watch weather,make de call after about 4:00 am and could scope out ole Fritchie!

lanco1
Re: Aerial Duck Survey January 2019
Well, it could be worth a look. The birds I saw were between apple pie ridge and old spanish trail but there could be some north of there on the refuge. Check the map they added some land lately in that area to go with that marsh creation project.
Reply

Mandevillian
Re: Aerial Duck Survey January 2019
lanco1,Thanks again,hit Fritchie on solo hunt,slept in tad waiting to see what weather would do,mistake as I was late setting up,saw nice flock of teal had single blaze by and had pair of mallards that had I been blinded up about 10 minutes earlier,mighta had excellent chance to nab both.Guys S of me decided to paddle around and they jumped up big flock of greys,took note of where they came from and went to and might make return trip tomorrow.Did not fire a shot,was more of scouting/exploring trip and all I had to do was to launch about 30 minutes earlier(took protected route whole way down and just about entire route back)and it was a chore getting under bridge construction on Ole Spanish Trail.Since I was paddling,I needed to take protected route and if there is decent launch nearby,could take Southfork.The ole launch where we typically launch 'rogues is useless for flatboats since impossible to pass under bridge!Thanks,again and got out just in time before rain started coming down!!

PS Did see guys N of me drop huge mottled duck,one of fine pair that soared over them and I did see handful of mottled ducks,probably in response to guys paddling out!!
Reply