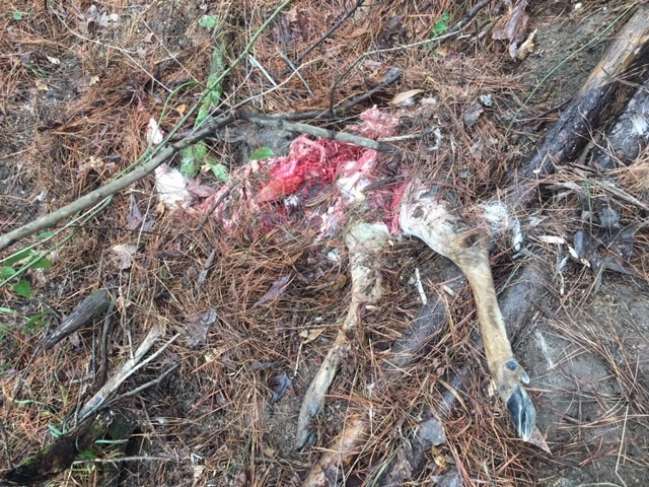 This past weekend while checking my trail-cameras and looking for antler sheds I ran across a mature Doe that had been recently killed and half consumed. It was covered up with leaves and small limbs and the guts had been removed and covered completely up about 10 yards away. Known predators in the area are coyotes, bobcats, and bears. Iâ€™ve never seen coyotes cover their kill and not sure about bears, but bobcats yes. I thought this would be a good thread to start and see what opinions might come up and what has other people seen. I setup two trail-cameras to see if I can catch some action but I left a lot of human scent while examining the remains. My best guess is there is a highway about 400 yards from kill site and maybe the deer was hit by a passing vehicle and then taken down by a predator. No drag marks from kill location which indicates it was killed there.
Also found one very nice new buck hooking and have several bucks on camera starting to drop their antlers.
Reply

Balcuns
Never seen that before. When it rains, does the water run down that way? Or is it flat terrain? Nice rub!!!!
Reply

Huckleberry
I would guess Bobcat. Where about is that? I once watched a good size Bobcat creep up on a mature doe feeding on one of my food plots. It was in a start-and-stop low crawl until it got to about fifteen feet from her. Then she spotted it and bolted. It took off after her and was still fifteen or twenty feet behind her when they both disappeared into the woods.
Reply

LETUMGROW
Redlowe170, now that?s funny!
Balcuns, there are hills but this kill site is in a pretty flat area. I am certain leaves and limbs were not washed onto the carcass. It was a very fresh kill site (less than 24 hours old) and you could tell how and where the leaves where pulled from all around the carcass.
Huckleberry, this is around Sicily Island in Catahoula parish.
Reply

Texbadeaux
How about A Bear. Covering the kill is very typical of a bear.
Reply