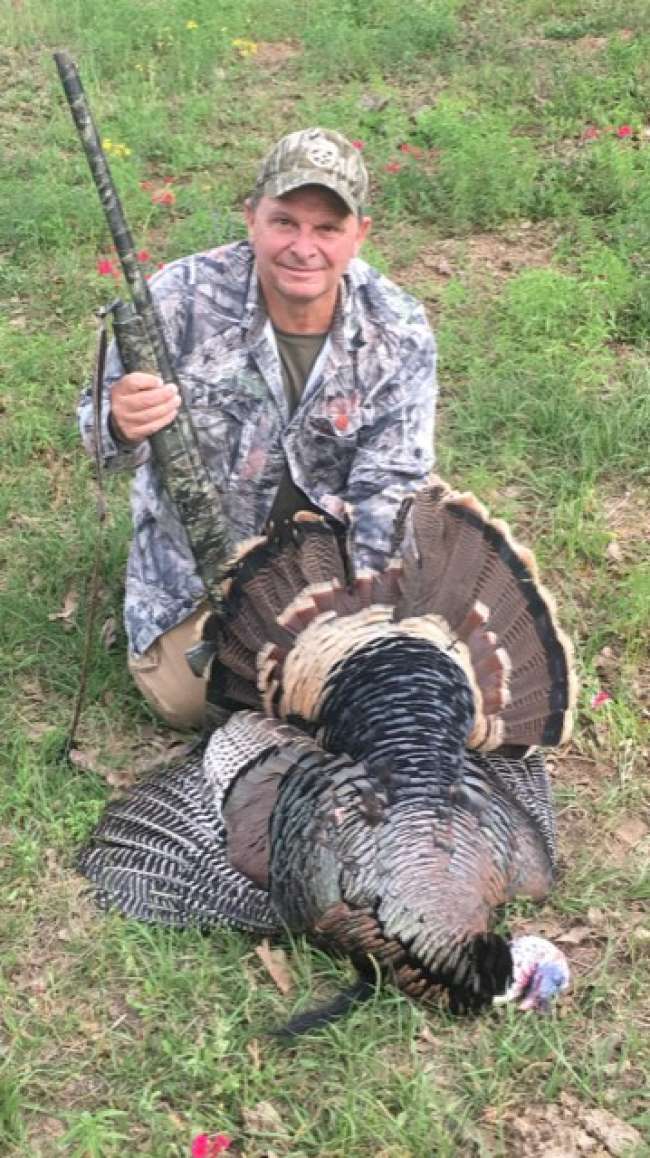 I just completed my first of two spring turkey hunting trips to Texas this past weekend just east of San Antonio in Guadalupe County which is a 4 gobbler tag county.
I arrived in the afternoon on Thursday and the weather was perfect. 70 degrees, sunny and very light breeze. I headed out to a creek bottom Iâ€™ve hunted before that runs along a cow pasture. I setup where I could see both the creek bottom and flat along with a view of the cow pasture. I also decided not to use my decoys as not knowing how many turkeys were in the area and cows get very curious of decoys. Once settled in I made a few soft yelps and got an immediate reply from a gobbler some 200 yards away. I got a little aggressive with my calling and got him fired up and gobbling at every call I threw at him. Shortly I caught some movement along the creek and watched as 4 hens were walking fast in my direction. They had me pegged and was walking straight at me. I knew the gobbler would be following so I got ready with my shotgun pointed in the same direction as the hens came from. All 4 hens walked up to within 5 yards of me and stopped. They were looking around but making no calls. After a few seconds they moved around behind me and started walking off. Thatâ€™s when I saw the big gobbler coming up the same trail as the hens did. He was a Hoss with a big rope for a beard! As he came in one of the hens which was behind me made an alarm call and froze the gobbler in his tracks. But it was too late as he was standing 40 yards in a nice opening. BOOM, I let him have a load of 12 gauge 3 Â½â€ number 6 Winchester XR Turkey load! What and adrenaline rush! I was only there for less than 30 minutes and had my first gobbler of the trip down. He had an 11 Â½â€ beard with 1 Â¼â€ spurs.
I still had plenty of daylight left so I moved to another location and roosted 4 or 5 gobblers for the next morning.
Friday morning as daylight came I was deciding which gobbler to go after as the woods were alive with gobblers gobbling on the roost. I settled for the closest one and worked him for several hours playing cat and mouse with him. He had several hens with him and I caught several good looks at him as I would try to out flank him. I had no luck breaking him away from his hens so I decided to try him in the afternoon.
Friday afternoon I setup in a nice flat with scrub oaks that was adjacent to a creek bed. I put out both my gobbler and hen decoy in a nice opening about 20 yards from my location. I started making soft yelps and as the afternoon went buy I started getting a little more aggressive with my calling. About an hour before sunset I got a response from what I thought was two gobblers. I threw out a few more calls and had them locked in on me gobbling at ever call I would make. It was so cool as it was one of those picture perfect hunts. Every time I would make a call they would gobble and get closer. I got my shotgun ready and pointed in the direction I last heard them gobble which was only about 75 yards away. I made a soft yelp and there they were only 20 yards gobbling. To have double gobblers that close to you gobbling is awesome! I put the bead on the biggest one and BOOM. He rolled and the other took off before I could get a shot on him. This was another good gobbler with 8 Â¾â€ beard and 1 1/8â€ spurs.
A cold front came in Saturday and the wind really picked up and the temps fell. I did work several more gobblers but they were locked up with hens and had no interest to come see a lonely hen in the bushes calling to them. I found a few awesome antler sheds from this past seasons bucks that survived which is always a neat find.
I plan to head back to Texas in a few weeks and try to fill my remaining turkey tags on some of those big Rio Gobblers. Louisiana Season opens this coming weekend at my place near Sicily Island which I hope to connect with a big Eastern bird. I hope you enjoyed the story and good luck if you are trying your luck at any gobblers this season.
Reply 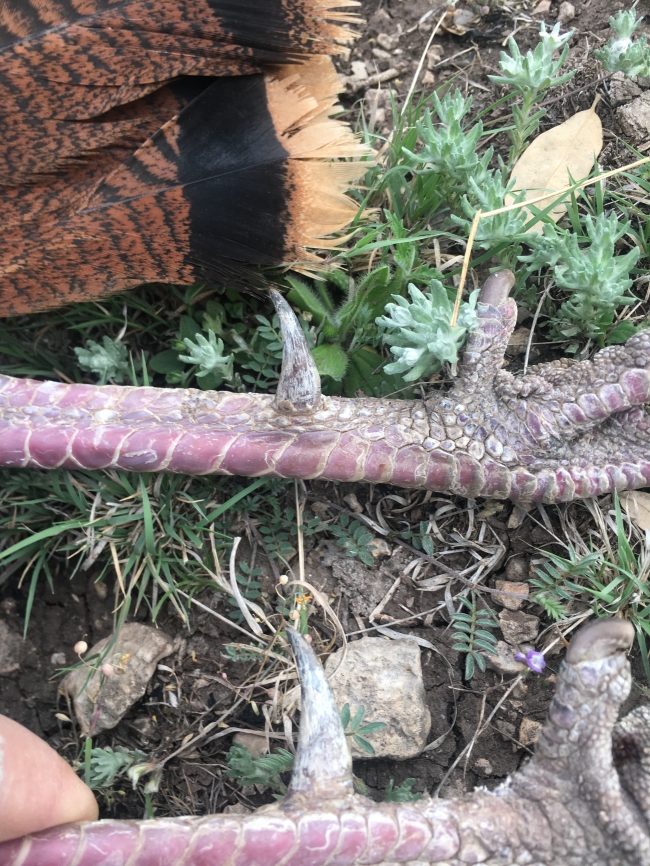 Great story Chris, I enjoyed a quick afternoon turkey hunt Thursday also. I was in Sonora out scouting for the afternoon and made a few calls and had this big 3 year old run in. The weather change stopped our turkey opportunities Saturday also. We did get a few hogs to add to our trip.
Reply 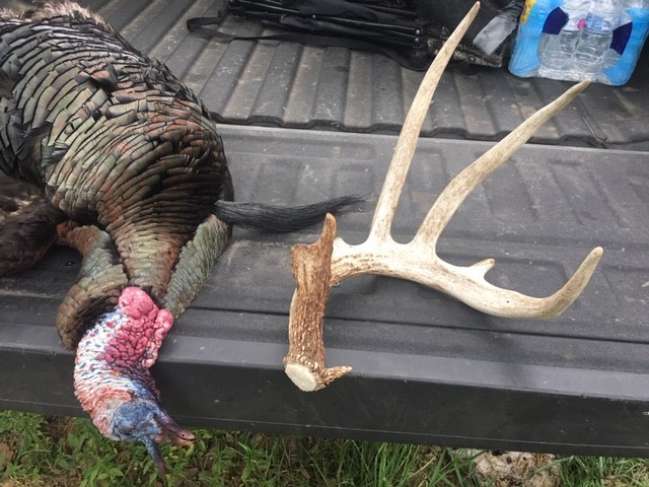 Here is a hog and some sheds I found while on my hunt.
Reply

Cajunsim
Nice one. Hunted Seguin last week and harvested one for the table. They were just starting to gobble when we left. Last year we went at end of season and skunked. May try week 3 next year. Headed to north Texas to try to fill remaining tags.
Reply

TURKEYHUNTR007
HEY GUYS
IVE never hunted turkeys in texas ,can u give me some ideas on south texas turkey hunting ,or guides or ranches you guys hunt any info would be appreciated.
Reply

LETUMGROW
TURKEYHUNTR007, no problem I will be glad to share info on Texas Turkey hunting. Check your e-mail.
Reply

Serena89
There's nothing wrong with hunting pigs or other wild animals, but hunting turkeys has been a little different.
basketballlegends.club
Reply

Catalina48
I like to hunt, but I have to be careful with something. I need to know if the animal you want to hunt has any cubs.

4422
Hunting is something i really admire. Thanks for sharing this amazing post.
https://www.nottingham-electrician.co.uk/electrical-safety-certificate/
Reply

kanebend2811
I really enjoyed reading your article, and I found it to be extremely helpful. If you have some spare time, please play retro bowl with me.
Reply

It was so cool as it was one of those picture perfect hunts. Keep it up!
Reply