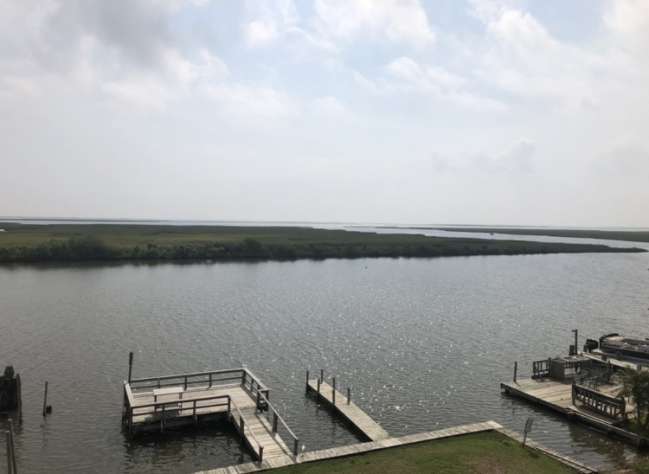 In my English class, I am writing a research paper on Coastal Erosion in South Louisiana. I have emphasized my research on the erosion of marsh in Cocodrie, because I am most familiar with this area. Every time my grandfather and I go fishing, he always tells me how “this all use to be land.” But I never really understood how much land he was talking about. Reality did not hit me until he showed me old pictures of the marsh around our camp. In the first two pictures, (Present day vs 1995) it shows the view from across our camp. As you can see, there are little to no trees left across the bayou in that area. The 3rd and 4th pictures show a satellite image of Sevin Canal and Bayou Cantrelle. I believe that the google image has not been updated recently and shows the area in between 2016-2017. The old satellite image is a map that is hung up in our camp but does not have a date. My grandfather believes it’s from 1980-1995 but he is not exactly sure. It is jaw dropping to me to see how much land use to be there only 25 to 40 years ago.

I wrote this report because the research I have done so far is eye opening to me. I find it crazy to believe that one day I will be in my grandfather’s shoes telling my grandchildren what used to be land. If anyone has any feedback I’d be glad to hear it.
Reply

Delta Duckman
Anyone who has been in the south Louisiana marsh for any amount of time knows how devastating erosion has been. Since you have some pictures to compare what once was there is an easier way to do it and may help with your report. The link below is to the Louisiana Department of Natural Resources website. It takes a little time to learn how to discover all of the layers of different years available, but once you learn it you can zoom in to an area of the coast and change the years from 1998 up to 2016. It is all satellite imagery showing land loss and changes from the years available.

Proud Pop
I did my 8th grade science project on Coastal Erosion way back in 1980. This was of interest to me as I grew up in the Delacroix marsh. It was the same old story way back then. We were loosing 40 square miles of marshland a year. This was after many years of “Studies” that have continued for 40 years to the present day studies. At least now they have a plan. Wether it is the right plan or not remains to be seen. Delacroix is becoming nothing but open water. Duck blinds have to be moved every 2 years because they end up in the water as the shoreline disappears. Many small islands of marsh that were 10 yds by 20 yds in size before last duck season are just a clump of marsh now. It really is sad!
Reply

DMAN1968
' At least now they have a plan'...which will take another 40 years to implement as everyone argues and lawyers get involved etc, etc...

Enjoy what you have while you have it and hope someone gets off their arse and gets started on what needs to be done.

Proud Pop
That was my point Dman. It took forever to start any real work. This plan doesn’t make feel much better as far as seeing a difference in my lifetime but at least the ball is finally rolling. It may be rolling in the wrong direction and ever so slow, but at least it’s moving. Every time I take my dad out fishing and hunting all he can do is throw his hands up as we are riding and gesture “ain’t there no more”. I will enjoy what we have until it’s gone if that what happens, but hope to live long enough to see some restoration progress.
Reply

mulletsquisher
The loss between Lafitte and Grand Isle, Bayou Biloxi, Delacroix is staggering, use to move around on helicopters and float plane's from West Bank to Venice and GI, etc. in the late 70's you had a good 20 to 25 min of marsh prairie with pot holes till you got close to some of the lower big bays, now as soon as you get some altitude you see open water, Buras west side is completely opened up, what we have seen our grandchildren will not see. 7,000 years to develop the sediment coastal lobes across the state.

Dr. Spot
This is a natural process of the delta-building life cycle. The Cocodrie marsh was built thousands of years ago when the Mississippi River flowed in the region. Then, the river changed direction. The next step is a barrier island is left behind on the delta edge, and the marsh retreats. It's a good geology lesson that deltas are dynamic. In the last few decades, this has been accelerated by sea level rise and man-made canals, but foremost it's a natural process. A good link showing this life cycle is: http://www.americaswetlandresources.com/background_facts/detailedstory/MississippiFormed.html . A good book is 'Washed Away? The Invisible Peoples of Louisiana's Wetlands' by Donald Davis.
Reply

mulletsquisher
You will be in your Grandfathers shoes one day but this is where you come into the picture and other young people like you to carry on and push to make sure some type of restoration/ coastal stewardship is put in place to protect what we have in this unique place we call home. Us older folks have witnessed the decline and raised concerns but it\'ll take the next generation or two to ensure we have a sustained turnaround, hopefully it only takes that long. Flip Pallot was on Florida Sportsman this weekend on either 604 or 605 and described the estuary collapse of the Indian River Estuary and the economic impact that estuary system has to Florida East Cost and the efforts to turn it around. If this occurs here the economic impact will be devastating. Like Proud Pop, Delta & DMan said at least we have a plan and direction right or wrong we have some movement. Dr. Spots resources and book recommendation are very much worth looking at
Reply

Mr. Mallard
Yes you are correct that it is a natural process, but there are many other human factors besides canals that have accelerated erosion is our coastal marshes. We created levee systems that channelize rivers and basins, instead of allowing for flood water to provide sediments and nutrients to the soil. Also, the northern states have dams along the rivers, which cause sediment to deposit to the bottom, instead of staying in the water column. So, the rivers do not carry near the amount of sediment that they used to. Yes, the river changing paths is natural, but the modern day levee/dam systems are not. Although sea level is rising, subsidence is also occurring because of the lack of nutrients in the soils that they once received. Which is why the wax lake outlet is a perfect example of how sediment deposition can actually 'grow' land. Depriving the eastern coastal marshes of Louisiana of sediment and nutrients has accelerated land loss in that region.
Reply

Dr. Spot
There are no major levees obstructing sheet flow in Cocodrie, and it's not near any river outlet for delta building. The Cocodrie wetland retreat is a perfect example of natural loss at the end of a delta cycle, other than the canal influences and sea level rise.

Of course, the wetland deterioration near the Mississippi River (not Cocodrie) with the levees, excessive manmade canals, underground faults, and agricultural nutrient pollution is a more complicated situation.

If I were doing a report on this in school, I would first explain the delta cycle, where Cocodrie is a perfect example. Then, as a second part of the report, explain all the extra factors contributing to wetland loss near the Mississippi River. For example, we know the levees cut off the sheet flow, the canals not only is physical land removal but accelerates land loss on its edges, an activated fault results in sudden large areas of land subsiding (i.e., around Empire), and that nutrient pollution weakens marsh roots in organic soil and becoming vulnerable to storm surge (i.e., Delacroix).

Put all this in the report, and you're a star student :)
Reply

DMAN1968
' I would first explain the delta cycle'. You cannot explain the delta cycle in terms that do not include what man's affect is on that cycle...except when talking about historical cycles. To use Cocodrie as an example of a 'natural' delta cycle...well...nothing on the Louisiana gulf coast is natural anymore. That ship sailed quite a while ago.
Reply