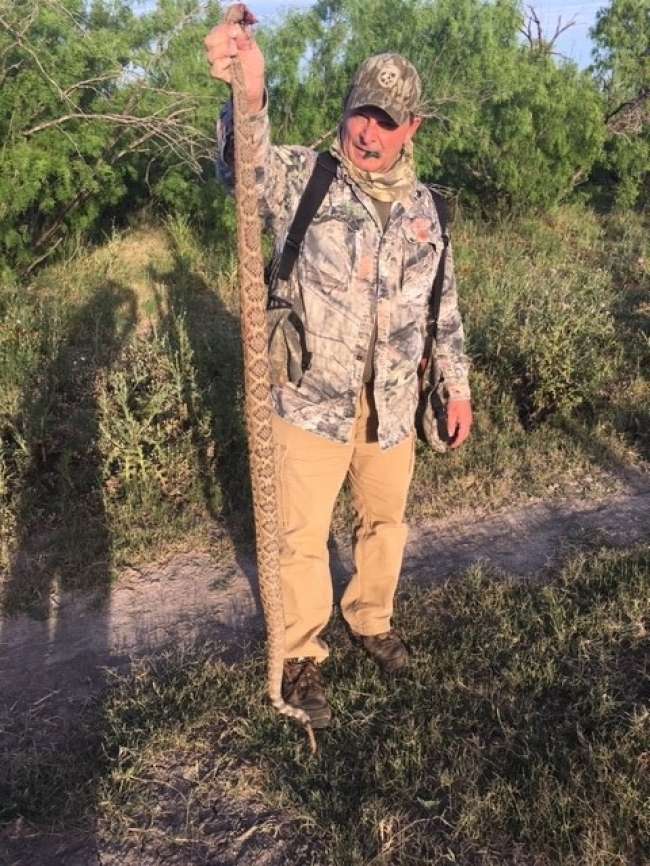 This was my second trip of the 2019 Texas spring turkey season. This trip I would be down in Zavala county chasing big Rio Gobblers in that south Texas brush country. I had two tags left to fill and I would be hunting a huge ranch which had a solid turkey population. I have hunted this ranch for the last 8 years and know the area pretty good. I left Port Allen around 4:00am on Thursday for the 11 hour drive. Picking up my close friend near San Antonio we arrived at the ranch just in time to unpack and ride around the ranch to see if we could stir up any gobblers and put one or two to bed. I was able to fire up a few gobblers and setup on them only to have young birds come in. I also bumped into a huge rattle snake while trying to close the gap on a gobbler. Talk about an adrenaline rush! He rattled when I got within a few feet of him as I wasn?t paying attention to the ground. A quick shot of turkey load put an end to that threat!

As dark approached I could hear what sounded like several gobblers along a creek about ï¿½ mile away so I eased closer down a road that ran along the creek towards them. As I got closer I could make out several gobblers strutting in the road about 400 yards from me. I just sat back and watched them until they made their way towards the creek and flew up on the roost between the road and the creek. So I was set for the morning! I had what appeared to be several big gobblers roosted and I also heard a few more close by.

Friday morning I went back to the area the gobblers were roosted in. It was about an hour before daybreak as I wanted to ease in as close as possible down the road where I had last seen them before they went to roost. I set out my hen decoy and eased back into some bushes where I could watch down the road. The view was tight as I could only see down the road and I knew I could have birds come in from behind me but this was the best setup I had. As the song birds started their morning off so did the Gobblers! I let out a few soft tree yelps and the woods exploded with gobblers. I couldn?t believe what I was hearing. It sounded like 8 or 10 gobblers along the creek stretching for about 150 yards are so. Every time one would gobble the others would answer. I would let out yelps and the creek bottom would explode with gobbling. This was a once in a lifetime event to hear something like this. After good light and about a thousand gobbles later I heard the closest turkeys fly down. They were close and less than 100 yards from me. Down the road about 80 yards I watched 3 long beards appear in the road and start strutting and gobbling. 3 Jakes showed up and was between the hen decoy and the 3 strutting gobblers. They were freaked out and didn?t know what to do and just stood there. About that time something caught my eye to my left and two big long beards stepped out in the road right next to the decoy. They circled the decoy and immediately knew something wasn?t right. I put the bead on one of them and BOOM, hit him with 12 gauge 3 ï¿½? Winchester #6 XR Turkey load at 30 yards. He rolled and before I could get another shot at the other one he had run out of site. My Gobbler had a 10 ï¿½? beard with 1 3/8? spurs.

Friday afternoon I setup in the same general area and called in several young gobblers and Jakes. So right before dark I moved locations farther down the creek about a mile and roosted several more gobblers for in the morning.

Saturday morning I setup in a nice clearing that ran along the creek. As daybreak came so did the gobbling. There were two gobblers within 200 yards of my location. I made a few soft tree yelps and had both of them fired up and gobbling. I heard the closest one fly down and I made a cackle which put him in high gear heading towards me. I saw him walking fast down a cow trail towards my location out at 100 yards. I threw out a few yelps and got him all fired up. He was gobbling and strutting. The other gobbler was closing in but I couldn't see him yet. The first gobbler approached to within 70 yards and hung up and the 2nd gobbler went silent. The gobbler I was looking at had me pegged and was just strutting around in circles. After about 10 minutes we he turned around facing away from me in full strut I made a soft yelp, he came out of strut and came in to 35 steps. He went back into full strut and I got ready and clucked at him. He came out of strut and stretched he neck out looking for me. BOOM, I let him have a solid load of #6 Winchester XR turkey load. I smoked him and he did a flip. He had a 10 ï¿½? beard with 1 1/8? spurs.

What an awesome Texas turkey season I had this year. Two great trip in two different areas that produced 4 great Rio Gobblers with tons of awesome memories.

Back to my place this coming weekend in Catahoula parish for the last weekend and hope the weather finally cooperates.

Take care be safe and hope you turkey hunters are enjoying some of the great outdoors this spring.
Reply

Cajunsim
Great to hear about your hunts. Heading back to Texas to chase thunder chickens. Always a rush to hear them thunder back when calling at em. Enjoyed stories and pictures.
Reply

preacher78
Loved reading your stories about your trip to Texas. My first turkey was a Rio that my dad called up for me when I was 14. There was at least 6-8 gobblers going nuts at daybreak before the gobbler I shot came off the roost to our position. I will never forget that hunt.

I am wanting to take my son for his first turkey next spring. I would love to talk to you about the ranch you hunt. Is it private land? Or is it a ranch that one could book a hunt for next spring? Would you be willing to give me some details?
Reply

LETUMGROW
I have sent e-mails to TURKEYHUNTR007, Cajunsim, and preacher78 through the 'contact user' button on this tread and not sure it went through. Please let me know if you received my note to you.
Reply

LETUMGROW
LSM web Manager/Admin, you need to look at fixing the contact User button. I have been sending e-mails and it appears no one is getting them.
Reply

preacher78
I have not received an email either. Please send to preston@redeemerbaptistbr.org thanks.
Reply