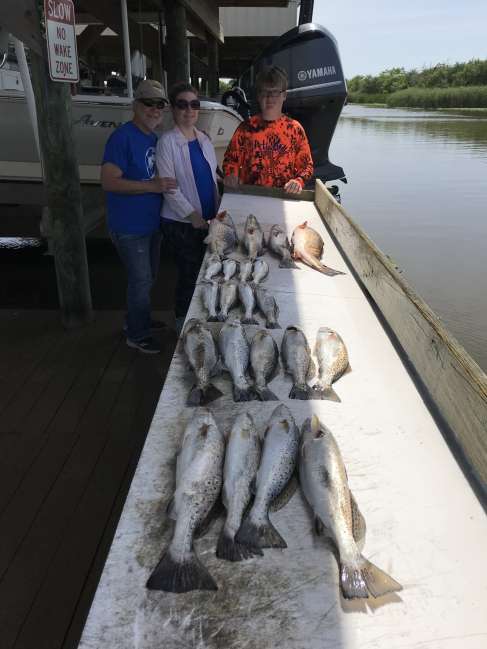 Cliff Fenton and family were back with me. We had a stiff North wind blowing which limited us to where we could fish. We found some flocks of birds diving and started catching a bunch of 11 inch fish with only a handful of keepers. Around 8am we switched gears to redfish. We found a slow bite picking away at another handful of reds. Around 12 the winds were dead calm so we headed out into the lake which was slick calm! It was back to trout fishing till around 2:30. We found a slow bite and picked away at them. It was a weird bite as the fish were short striking the bait which made it hard to hook them. One lonely bull red also hit a Matrix Shad which made for a fun fight. Thanks again guys for a great day on the water.

Today I had Brodie Broussard and crew onboard. These guys were ready and had their game faces on, look out trout! We found dingy stained water at our first stop and I wasn’t sure if they were going to bite, but they did!! It didn’t take long for the trout to start feeding on our double rigged Matrix Shad lures! We picked away and had a couple good runs of catching. Most of the fish went 16-19 inches. When things slowed down we made a few moves chasing birds picking up a few keepers, but most the fish were under 11 inches. Tons of small fish under all the flocks of birds we fished, which is a good sign for the future stock.

Good customer Tim Balin and Mark Maclean were back with me today. We found a good trout bite in less than favorable conditions with all this wind. That Matrix Shad Shrimp Creole Shrimp TKO under the Four Horsemen Tackle corks put a hurt on the fish today. We brought along some of that live bait stuff again for insurance. Always a fun time fishing with these guys, looking forward to what we find Tomorrow.

Day two with Mark Maclean and Tim Balin found storms early this morning and 30 mph winds!! We went back to sleep for another hour and left after day break! Trout was out the question so we targeted reds deep in the marsh. Slow steady bite most of the morning until we changed zip codes and found a pile of reds in one lil 30 yard stretch!! Shrimp under the Four Horsemen Tackle corks hooked 5 and Matrix Shad soft plastics hooked 10 (unfortunately 3 got off before getting into the net). Great two days with these guys, always a pleasure fishing with you. Looking forward to your return in November.

Edward Kane and wife from Connecticut and bro in law Matt fished with me today. 20 mph winds had us red fishing again. We had a slow steady bite all morning on shrimp under the Four Horsemen Tackle corks. After changing zip codes we found a incredible bite on the Green hornet Matrix Shad with a gold spinner. Ed was on fire as he had the hot rod and must have hooked ten reds!! What a great day with great folks, thanks again for such a incredible day.