Another Busy Week of Catching 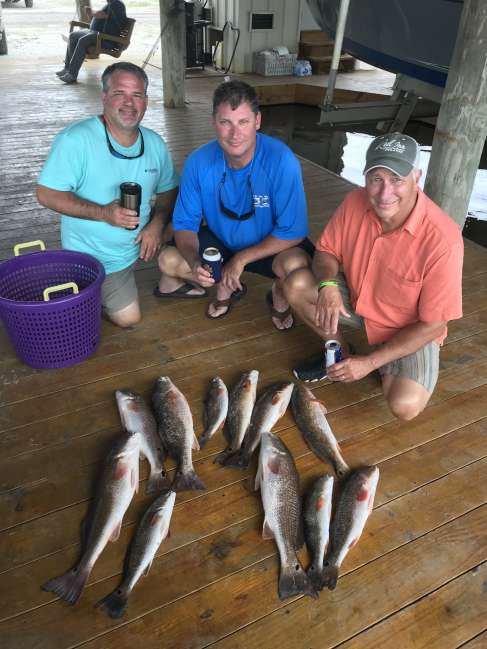 Day 1 with INOLECT, we slept in late waiting on the weather to pass. It looked like we had a window so we took it. As soon as we got to our second location, the sky fell!! We retreated to a camp and waited the storm out. Once the rain quit we had five reds in the box quick. We moved to where we left them biting the previous day and only one decided to bite. One more move and we found five more on Green Hornet Matrix Shad before calling it quits. Always a fun time with this crew. Thanks Capt T for running the second boat.

Day 2 with Inolect had us trout fishing!! We woke up to calm winds as the forecast was wrong again but in our favor! We found clean water and some big trout. Nothing better than watching big yellow mouths shaking their heads coming to the boat!! What a great time with some great guys. Big thanks to Capt T for running the second boat putting his crew on the reds and to Shawn P for all the great food! Can’t thank Lonnie Barr with Inolect enough also for the continued business and friendship over the past 11 years.

Ricky and Linda Barbera we’re back onboard the Blue Wave Boats today with me. With the North wind blowing and a low tide we decided to catch reds. After a late start and our first two stops being a bust, we found the hefty reds stacked up. It was quick action under the Four Horsemen Tackle corks with fresh bait shrimp. Once the tide quit the bite shut down. We waited it out and the bite was back on. A big school of sharks showed up and shut the bite down. #15 was left swimming to be caught another day. It was a great time once again with this lovely couple. Thanks for the continued business.

New Customer Greg Metcalf with Deano’s Pizza and his buddy joined me today on the big Blue Wave Boats. We found a slow bite at our first three stops, then hit the motherload of trout!! We had them coming in every cast as fast as you could throw them Live shrimp things in the water!! Our most productive bite was under the Four Horsemen Tackle corks. I did catch some on avocado Matrix Shad on a double rig, but that live bait stuff produced for the first time today for us. It was a blast fishing with these guys, thanks again. Greg mentioned this was his first real trout slam ever, glad I was able to be a part of it. Can’t wait to sample that pizza tonight!!

My lucky charm crew were back with me today. Josh Gillen, Mike Gillen, and Drew Carlin. These guys have been fishing with me for around 11 years and we always seem to slam the fish! It was fast and Furious at our first stop as we put 40 trout in the Blue Wave Boats on double rigged Matrix Shad in the first 20 minutes! Once the smoke settled we had 65 cooling down in the box! Our second move had us to 83 and the dolphins shut the bite down! One last stop and it was as fast as we could throw the baits out! We left them biting every cast. Always a blast having this crew onboard. Thanks guys for the continued business.

Got in early this morning with a 100 iced down. We cleaned fish, I cleaned out the boat, loaded back up with another crew, and were headed back out. It was windier this afternoon and we found a much slower trout bite. It was almost non existent until around 5 pm. We ended up putting a small mix of trout together in between all the trash fish! Thanks Capt T for setting up the trip.