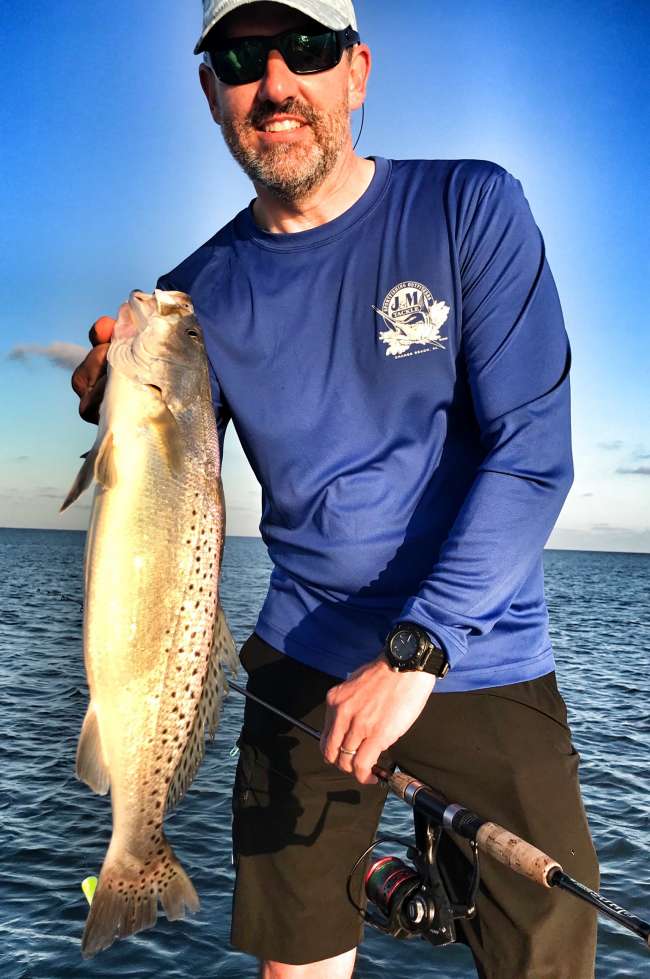 Day 2 with Home Bank crew had us trout fishing again. We found a slower bite but the quality was much better. Once the big girls quit, we moved and found a every cast bite but most were all 11 inch fish. After another move we found another every cast bite with small fish. It was one keeper to 6-7 throw backs. The future stock of trout is looking good, as we are catching tons of 11 - 11 3/4 trout everywhere!! My crew had non stop action and put a nice box of fish together. Great time fishing with these guys again. Thanks Capt T for putting the trip together.
Big thanks to Capt Elton for taking care of Francis Mayer’s crew for me, they also had a great day.

I helped out Capt T again today. With the winds blowing 25 mph we decided to stay protected and catch reds. We started out throwing bait shrimp under the Four Horsemen Tackle corks not having any luck. We switched to throwing gold spoons and it was on!!! One red also hit a purple haze Vortex Shad. My crew ended up hooking into 23 reds getting 17 into the boat. Great time watching the Reds in the clear water. Thanks T for setting it up.
Big thanks to Capt Lonnie Barr for taking care of Brian and David, Capt Elton Rodrigue for taking care of Francis Mayer, Capt Shawn p and Capt Kevin Labat for taking care of Cody Lenert’s crew. Everyone had a blast.

Day two helping Capt T. We started the morning out picking pumpkins out the patch on spoons. My crew wanted to try to catch some bulls so with the weather approaching we left the patch to soak crabs. My crew hooked three before we were ran in by storms. Thanks T for setting it up.
Big thanks to Capt Lonnie Barr Capt Kevin Labat and Capt Shawn P Whitney for taking care of Cody Lenert’s crew.

Coach Rodney Guin and his crew were back with me today on the Blue Wave Boats. Our first stop had us reeling in trout on double rigged Matrix Shad. Our next couple stops the guys put the smackdown on some nice trout and played catch and release with smaller trout every cast.
http://matrixshad.com/shop/shrimp-creole-tko-shrimp/ under our Four Horsemen Tackle corks put a solid hurt on the fish today.
It’s always a pleasure fishing with these guys. Thanks Coach for the continued business.

Day two with Coach Rodney Guin and crew has the winds blowing 28 mph upon departing the dock. Coach likes to catch trout so that’s what we set out for. It was a pretty easy ride out to the trout grounds, our first stop found no fish. Our second stop had trout coming in from the first cast!! We had non stop action catching, but tons of 11-11.5 inch trout. We made several moves never finding a good bite again as the winds peaked at 32 mph. We probably had 100 trout hit the deck of the Blue Wave Boats, but only 27 keepers made the cut. We came into the marsh and it was so windy we could barley fish. After drifting one bank and only catching one bay snapper my guys threw in the towel. We headed in at noon for them to shower up at the lodge and make their drive home. Great two days guys, I look forward to your return in July.