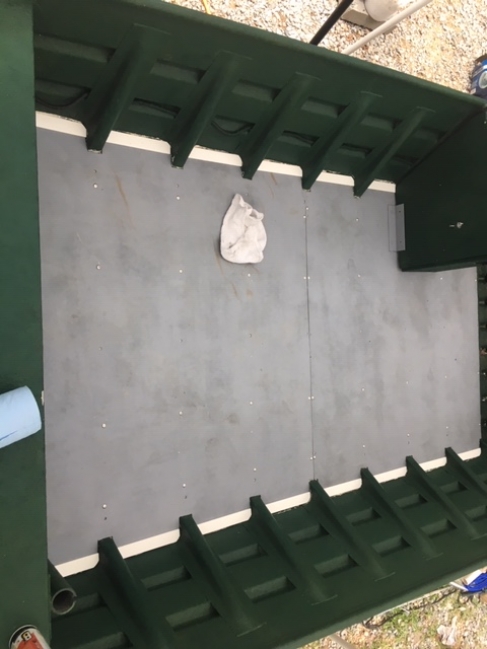 Been undertaking major total rebuild of older Southfork,16 by 52 Commercial Flat,powered by beast of a 50 Johnson and this ole gal has been through a lot,starting with lower unit crash,compliments of dear ole Katrina and did get used lower unit installed and lower unit replacement was never as strong as original and eventually it started acting up and rather than plunking down serious coin for new motor,decided to fix what I had.50 Johnson screams and duck hunting buddy of mine introduced me to his marine mechanic and he and I took off lower unit last Monday and hoping to get her back on water in time for Jesuit Alumni Rodeo this Friday and Saturday.This rig had some cracks on underside and I found excellent mobile aluminum welder who came to me,had ole Southfork blocked up,trailer removed,and once he did his magic,I applied a few nice coats of Fasco 2-part epoxy,thoroughly mixed in dark green pigment(was told to start with neutral Fasco)and it was a chore,sanding down underside of 16 by 52 flat but perserverance and lotta sweat equity got it done,Fasco is some incredible stuff,same stuff used on undersides of airboats and Lord knows the abuse they endure.Leak-checked her,checked out perfectly and re-installed 1/8 inch sheet aluminum flooring(had to grind away Grizzly Grip dark green paint)and got flooring sanded and primed and found some serious solid aluminum 1/4 inch rivets(Hanson Rivet Company).Cut new vinyl moldings to seal off gaps between edge of flooring and sides of flat and used Loctite Construction adhesive,custom-cut each piece of solid vinyl moldings and next step will be to seal all seams with Fast-Cure Marine Adhesive 5200,very incredible stuff that I have used extensively on many marine repairs/rebuilds.Next step is to apply 5200,allow 24 hrs to cure and then apply few coats of dark green Grizzly Grip to floor and inner surfaces of entire Southfork.Have already sanded and metal-prepped and painted Skipper B trailer and custom-made fine composite running boards,using Trex 1 by 4's and quality marine bunk board carpeting.Last step will be to get lower unit back,reinstalled and adjusted and she should last hopefully another 10-15 years!!!

Mandevillian
Put Fast-Cure 5200 around all seams and anyone that has ever used dat stuff will readily agree how messy dat stuff is but it works incredibly well.Next step is to allow at least 24 hrs for solid cure,wipe down interior with MEK substitute,then another messy,messy job that of applying aliphatic resin-based Grizzly Grip,Emerald Green to floor and all interior surfaces,including gunwales.Headed next door to chase some stocked pond critters,including very healthy perch and bass population!!! 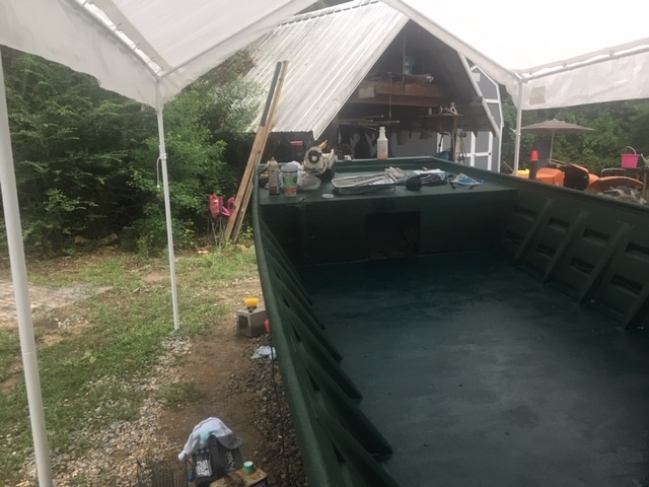 Wanted to attach recent pic of ole Southfork with one nice coat of Emerald Green Grizzy Grip applied to primed and sealed aluminum floor.Will put one more coat,using specialty roller,and will paint interior and gunwales and she should be looking factory-new and awaiting lower unit rebuild and install with necessary adjustments,can't wait!!!Hard to believe teal season round de corner and hope we do not have back-to-back-to-back miserable duck seasons.Might have to take up golf-----NOT!!!! 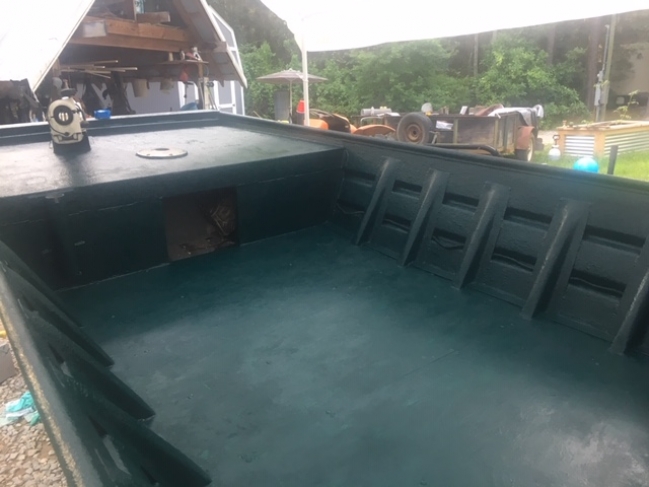 Here is latest,showing both port and starboard sides and floor.Need one more coat on floor and need to paint rear section and touch-up spots that need it and she should be up and on water soon.The Grizzly Grip needs about 3 days for full cure and that is some mighty-fine stuff,not terribly difficult to put down but extremely messy and it sticks very well,assuming the substrate is properly prepped.I did change color from Camo Green to Emerald Green and a buddy asked why I did not have Rhino Liner or X-Liner or similar product sprayed and the simple and easy answer is cost and I have Rhino liner in our antique Chevy Pick Up and that stuff,though very durable,holds heat and Grizzly Grip does not seem to hold the heat like black Rhino Liner!!!Plus applying Grizzly Grip,doing the work myself,is not that expensive,runs about $26 per quart and I might need 7 quarts total to do very thorough and thick job that should last years!!!