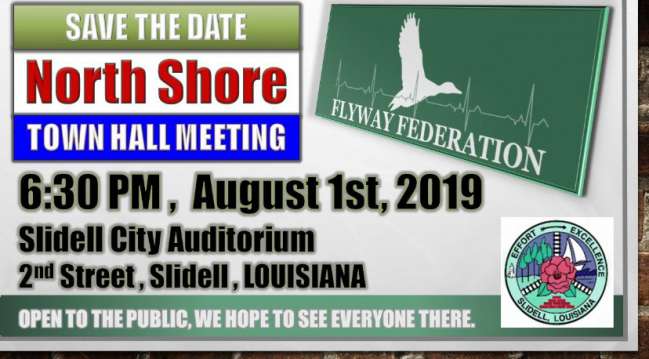 Wanted to send head's up that the location has been changed for the upcoming NShore Flyway Federation Town Hall Meeting and the attached flyer shows the correct location,Slidell City Auditorium.Hope to see yall there!!

Mandevillian
Re: Flyway Federation Town Hall Meeting NShore 8 1 19
Wanted to thank Josh and the folks that presented at tonight's Slidell Flyway Federation Meeting-great job,guys,got plenty of ammo to support the altered natural migratory patterns,somewhat coincidentally,right after the legal language of the Migratory Bird Treaty(Act)was changed to NOW allow legal baiting in the form of hunting 'unharvested corn(grain)' and allowed legal manipulation of water levels,small wonder that ducks that used to routinely migrate into our great state now have possibly irreversibly altered migratory patterns and not gonna be easy to get the DU and Delta Waterfowl folks to the table but a start was most definitely made.From a purely personal and somewhat anecdotal observation,ducks that formerly migrated en mass(gadwalls,especially),no longer frequent ponds that have exponentially increased in SAV since Katrina year(happened to be one of our best-ever seasons hunting the beautiful NShore Marsh)!!The data presented most definitely pointed to dramatically reduced migrations of gadwalls and mallards and perhaps ZERO impact on divers,that do not eat corn on a regular basis(redheads,scaup,canvasbacks)and my personal observation is that a lot of the gadwall-filled grass-laden ponds have been taken over by much less desirable scaup,wonder where the gadwalls are hiding(anywhere up N where legal baiting in the form of hunting unharvested crops is routine).Before one goes about dumping corn in ponds down here,not only is that strictly illegal it would serve no purpose since the former migrators we had are now up N,possibly MO,IL,KS,definitely not Sportsman's Paradise.Thanks,Josh,for sending me kudos and it was a pleasure meeting with ya and the staff at Flyway Federation of LA.Maybe if we can convince DU and Delta to co-ordinate a tracking survey with radio-transponders,you would have scientific evidence of exactly what we suspect is going on.Headed to Hopedale tomorrow,gotta get some shut-eye and have a safe trip back home!!