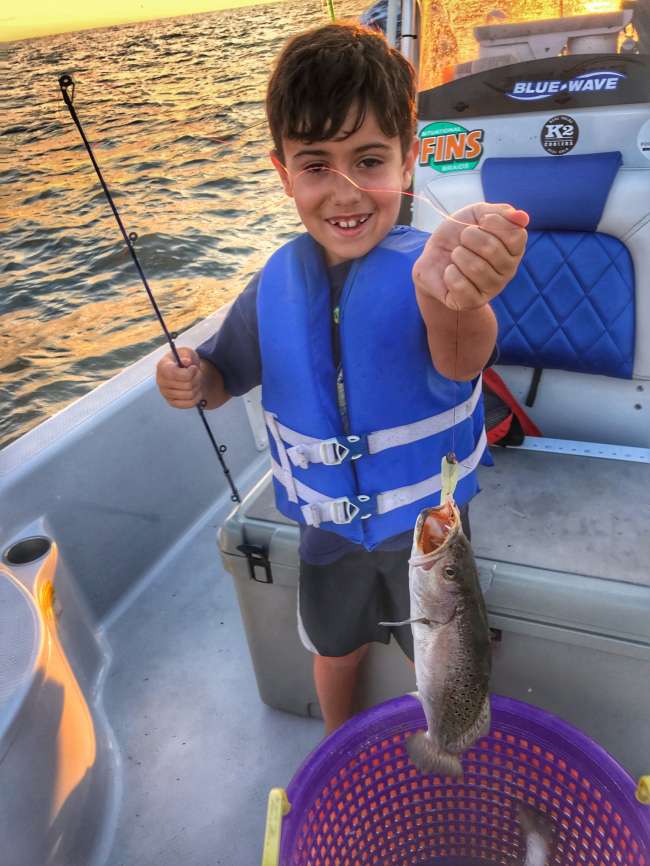 Rodney Trahan and crew joined me on the Bluewave. We found a extremely slow bite, as the specks were very finicky and not schooled up. We covered the most water I’ve ever covered in a single day and never got on a good bite of keeper fish. Tons of small 11 inch fish everywhere we fished. And just as many boats!! We worked long and hard for our catch. Thanks guys for sticking it out. Big thanks To Capt Lonnie Barr for taking care of Frank Lettieri and family for me they found a good bite and had a great day.

Finally I have a little time off to spend with the family and get the camp finished. This morning I took the boys trout fishing. The shrimp were running for their lives as the trout were feeding fast and Furious. We slammed the trout on double rigged Matrix Shad as usual. With a storm approaching, we played it safe and headed in.....leaving the fish biting every cast. What a blast we had.

We arrived to a fast and Furious non stop bite first thing this morning. We had the specks flying over the gunnels 360 degrees around the boat on double rigged Matrix Shad. They were also hitting the Matrix Mullet, what a great morning with the boys. We were rolling back to the dock by 7:30 and beat the heat.

Another great day on the water with my boys!!! Slow start today on the specks, but the white trout were every cast. We left the white trout biting to go find specks, our next stop found five nice ones. One more move and we found birds diving and trout in hot pursuit of shrimp. Non stop action for the boys weeding through a bunch of 11 inch fish. Once we had plenty to fry, we left them biting to come in and get in the shade and finsh up working on the camp.