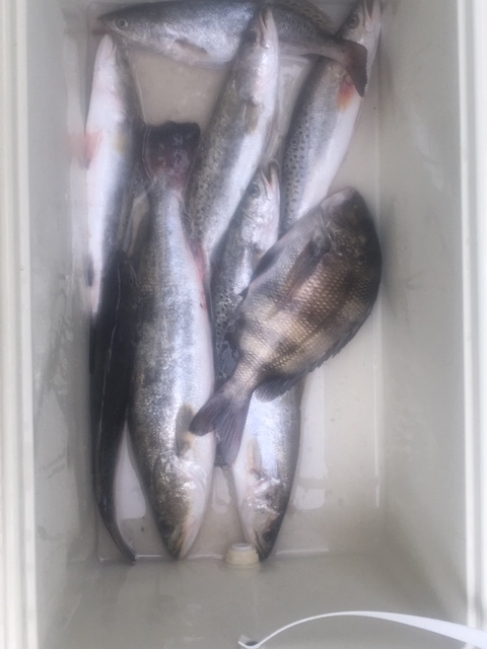 Went to extremely important Flyway Federation Meeting last night in Slidell and had Hopedale fishing trip planned to today and I added to my thread regarding NShore Flyway Federation Meeting late last night.Me and Medicare client hit the Hopedale area and he got about 50 live shrimp and I love shrimp imitation lures and lost Vudu almost on first cast as ultra-fine Quantum Smoke Spinning reel,mated to very nice St.Croix Triumph rod allows me to about spool reel with cast!!!Damn wind caught my cast,popping cork and Vudu ended up in doggone rocks and I lost Vudu but was good fortune as I tied on borrowed popping cork from fishing buddy and mated Tsunamai Holographic Shrimp(Glow)to it and even de lil specks liked to take de pole outta ya hands.Unfortunately,we only managed 8 decent specks,lost a nice one probably close to 3 lbs(surfaced when I set hook and managed to somehow spit Tsunamai)and my fishing buddy got small sheepshead on livie under popping cork and I made a believer of him regarding Tsunamai Holographic Shrimp.Dat think looks way too real.We released probably 30-40 specks with quite a few 11.99 inches and I do NOT take a chance,aint worth it and we probably missed a good bit of early bite by waiting at Hopedale Marina until the skies somewhat cleared up,did get rained on a few times but no big deal.Looks like we gonna be hitting the Shell Beach/Hopedale area quite a few more times before what we hope to be a decent teal season!!!TheWizard 7 called and we stopped,enjoyed a cold one with him and he showed us ultra-fine Reddington 4-piece fly rod,forget the weight.Karl,nice place ya got in Violet-wished Buddy and I lived a tad closer to ya and will let ya know when Lady P starts giving up some nice reds!!

Otis78
Re: Don't Need No Stinking Shrimp-Tsunamai Holographic Pr
Great post Mandevillian! Would you say that you could safely fish Hopedale and Shell Beach from a kayak? I've been wanting to try but I don't know anyone who has and don't want to do anything stupid on purpose. Thanks!
Reply

DMAN1968
Re: Don\\\\\\\
Both Hopedale and Shell beach are frequented by kayakers...I've been to Hopedale but not to Shell beach yet. Hopedale Marina has a kayak only launch near the regular boat launch...launch there and hit the marsh or the rocks at the MRGO. I know people launch out of Campo's and head across the MRGO and fish the rocks near there. Some even go to fish by the fort on lake Borgne.

Check out/join Bayou Coast Kayak Fishing Club. Plenty more information there. www.bckfc.org . I forget how to get to the facebook page for them.
Reply

Mandevillian
Re: Don't Need No Stinking Shrimp-Tsunamai Holographic Pr
Otis 78,Most definitely can fish Hopedale(have never tried Shell Beach)via yak and there are plenty of spots within easy yakking distance from Hopedale Marina and fishing the interior Hopedale Marsh might be excellent choice!Cut my teeth launching at Pip's and not sure if it is still usable and plenty of spots to try,who knows just might stumble upon spots NOT that easily accessible via bigger boat(s)!!Got buddy who fared much better than us most likely fishing same general area and think only difference was their choice of soft plastics,croaker imitation vs shrimp imitation.Had we been able to keep maybe 50% of what we caught last Friday,no doubt we may have had close to 40 specks,easily.Another Abita KC buddy contacted me today and my suggestion was to try live shrimp,not necessary,but he may be able to get fish worked up,switch over to Tsunamai Shrimp,and hang on as we lost one of our very first fish hooked,most likely shark based upon how shredded the line was!!!Good luck and be safe!!

Otis78
Re: Don't Need No Stinking Shrimp-Tsunamai Holographic Pr
Awesome! Y'all are the best! I've been dying to get out in some real water and catch some fish. What made me nervous was while fishing from shore I've see some large bay boats flying through the bayou's and I didn't want to become a speed bump. It's a long ride from Abita Springs to drive around and cast from shore. Thank you!
Reply

Mandevillian
Re: Don't Need No Stinking Shrimp-Tsunamai Holographic Pr
Just be extra careful and bet there are tons of reds awaiting ya.Got a buddy from Abita KC's headed to Hopedale tomorrow and he will most likely get some fishing insurance(live shrimp)and hope they slam some nice specks.I have been working very hard at basically total rebuild of 2000 Southfork 16 by 52 Commercial flat and just about hour ago played around with new Lowrance GPS/Depthfinder and can't wait to do final install and give de Southfork good water test with hopefully some decent fish to take home!!Good luck!!

P.S. Bet it won't be too long before Lady P gives up some nice sight-casted reds!!!
Reply

Dr. Spot
Re: Don't Need No Stinking Shrimp-Tsunamai Holographic Pr
I'm always puzzled by posts bragging they don't need live shrimp for trout. Yes, it's cool when they are not needed, but often they are and it's the only thing the trout will touch. I can cite at least 100 trips where this happened (I always have a lure handy, because its quicker to catch trout on lures if they are willing, so I'm not anti-lure). After paying all the $$$ for a boat, truck, gas, fishing license, insurance, launch fee, tackle, maintenance, repairs, etc.....what's another $15-20 for bait for the MANY TIMES trout only want bait?
Reply

Mandevillian
Re: Don\\\'t Need No Stinking Shrimp
Guess what,Dr.Spot,not bragging just stating the truth that Most of the time live bait NOT essential and on that Hopedale trip my fishing buddy bought 50 live shrimp and not 100% sure but about 99.99% sure he only contributed sheepshead to box and I joked that for a low price I would rent him Tsunsmai🎩

Mandevillian,anyone can and Should catch a fish with a fish🎣
Reply

Thewizard7
Re: Don't Need No Stinking Shrimp-Tsunamai Holographic Pr
Just wanted to put my 2 cents in as I stated I don’t need no stinking Shrimp!!!! Shrimp are for people who don’t know how to fish, unless they want a Guarantee that they are gonna go home with a couple of fish, even if it means burning up cash to feed little fish most of the time , why you think guides take a Reassurance ! ! When they take clients out , because people don’t know how to fish!!! Don’t Need Any Stinking Shrimp!!! 🧙‍♂️
Reply

Mandevillian
Re: Don't Need No Stinking Shrimp-Tsunamai Holographic Pr
Wiz,Could not have stated it any better.I can't tell ya how many trips I have made with folks tossing live shrimp right alongside of me and surprisingly,I either caught more keepers or just plenty fish that never needed measuring vs having to about stomp on specks to make sure dey made de 12 inch mark from folks using live shrimp.I think one reason is that some folks tossing live shrimp may not work dat bait nearly as aggressively as you and I and the Tsunamai Holographic Glow shrimp stood out in murky Breton Sound water vs live shrimp that did NOT glow or have the fine Holographic silver about where the innards would be,just my 0.02!!!I will say that dipping soft plastics in Chartreuse Spike It makes a HUGE difference and I did not try dat on last Hopedale Trip.Just got Navionics update downloaded onto memory card and used micro SD card inside bigger memory card to get Hook2-5 Tripleshot as up-to-date as it can be and love the charts shown with known obstructions,reefs,etc listed!!Can't wait for Fall and big sow specks on soft/hard plastics!!!

Dr. Spot
Re: Don\\\\\\\
I've fished since 1973 and seen it all. Trips where lures were better. Many, many trips where only bait worked. Fished next to people who insisted on lures even though everyone else was wailing on the trout with live shrimp and they were whiffing. Trips where lures were better, so we switched to lures. Trips where pogies, croaker, cocahoe minnows, or mullet worked best than shrimp. Saying people using bait don't know how to fish is a very ignorant statement. Bait also gives you options for drum, sheephead, redfish, channel mullet, croaker, etc. There are times of the year when trout don't bite as well but the meatfish are a great option. When the pinfish are bad, Gulp are a good option sometimes. The big trout love topwaters certain times of the year. It just depends, so I'm saying keep your options open. It also doesn't have to cost money --- I use a cast net and traps when time permits, and then I also have shrimp to eat.

PS.....watch how trout act under the lights, and you\'ll see why lures sometimes don't work. They are smarter than given credit. You'll see them swim up to the lure then turn around because its fake. Freelined live shrimp,instant hookup. Then, 2 hours later, they get turned on by tide or a ball of bait passing through, and they hit lures quickly. It depends, and that\'s the beauty of the sport.
Reply

Thewizard7
Re: Don't Need No Stinking Shrimp-Tsunamai Holographic Pr
Let me get to the point, there’s times when shrimp might make a difference, but as for me and other Purist put me next to you and I’ll show you how to catch fish with out using a Stinking Shrimp, every time , l haven’t used a shrimp in over 30 years of fishing, yes I carry a cast net on my boat so when I see a school of shrimp on top l use it to catch them so I’ll have something to cook with my fish that I caught on plastic or fly’s 🧙‍♂️🎣
Reply

gonehunting
Re: Don\\\'t Need No Stinking Shrimp
Wow, you all come on here and talk crap like this. Because I use live shrimp I don't know how to fish. Well I'd say you don't know crap. You come post on here like you did something. I see you post 2 and 3 fish at a time. It takes you 5 trips to get enough for a fish fry. Just cause someone else fishes different from you doesn't mean they don't know how to fish. Also your statement about people fishing next to you with live bait, and you out fishing them is bull. 99% of time, if you catching on artificial bait, and someone shows up with live shrimp, your game is over. I might not know how to fish cause I do use live bait, but my freezer is full, and I can't tell you the last time I came home with only 2 or 3 fish.
Reply

Thewizard7
Re: Don\\\'t Need No Stinking Shrimp
Hahaha 🤣 I only keep enough fish for a meal , if family or friends want fish I’ll bring more home. Yes as I stated I don’t need shrimp or any other live bait to catch a fish , l went this morning caught 4 reds on spoons and released 3 to fight another day , I’m not a hog that has to haul in a limit every time I go !! 🧙‍♂️
Reply

Mandevillian
Re: Don't Need No Stinking Shrimp-Tsunamai Holographic Pr
Wiz,Once again ya 'Spot-On' pun intended and I can't remember last time I used live bait,whether shrimp,croakers,etc and I have not been nearly as successful as you in your piece of 'Paradise' and think Buddy and I will give my totally rebuilt Southfork a nice 'shake-down' cruise and check out the new Lowrance with enhanced Navionics updates installed!!Been toying around with dat fine lil unit and love the data presented-gotta lotta marked reefs out there!!!Good luck to all using live bait-the marina operators luv em!!!Don't need no stinking shrimp!!!Hope to nab a few sight-casted reds on Bombers,gold spoons,etc(no live bait)!!! 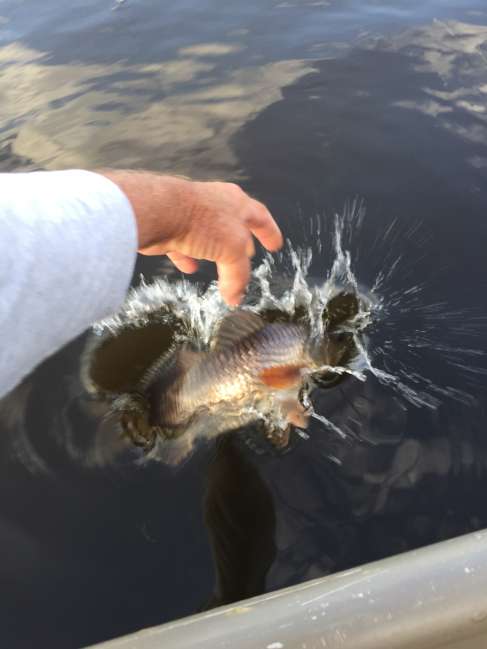 And Yes This How You Do It!!
Reply