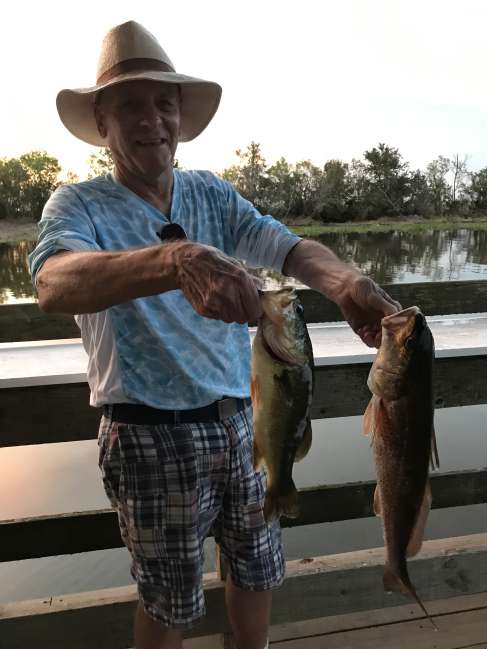 Beau Boudreaux and his dad have been fishing with me for five years now, the first four they experienced limits or near limits of reds and bass. They usually come the first week of July and fish in the afternoon. I was on vacation so we rescheduled for the second week of July, then bad weather and Hurricane Barry hit. We rescheduled for the beginning of August and finally got the trip in!! Unfortunately the fish did not cooperate on this day. We fished high and low, to only find a few fish. Always a pleasure having these guys on board and I look forward to their return in October.

Day one with my anonymous crew found storms and rough seas to start the morning off. It was a adventure ride to say the least!! After getting around a huge storm, things calmed down and it turned into a beautiful day. Good tide, emerald green water but the fish were in lock jaw mode. We searched and searched only catching a couple fish at each stop.

Day two found calm winds and calm seas. We started catching a few fish right from the start and thought things would be better. Well in the blink of the eye, the bite was over. We fished everywhere possible and some places twice. When we finally got on our best bite of the morning, a crew boat backed in prop washing and dirtying up the entire structure. Only one other fish to be found after fishing another six locations. With storms building all around us, we packed it in and headed back to the camp. Big thanks to chef Shawn P Whitney for all the fabulous dishes he cooked three days for everyone. Also a big thanks to Capt Kevin Labat and Capt Elton Rodrigue for running the other boats.

Paul Eastin and family were back onboard the Blue Wave Boats. We started off the morning running to get live croakers, since the day before was tough on plastics. We started catching a few fish on plastic and croakers, and Shelbi Eastin hooked into a beast of a bull red (which made her day). We had a bad catfish incident but proceeded to fish dodging storms all morning. Stop after stop no luck even with the croakers. Emerald green water and good tide movement and no bite. We fished long and hard even with that live stuff and not much to show for our efforts. Hope your feeling better Paul, see y’all next time.

Mandevillian
Re: Four days of Tough Fishing
Cap,Sounds like ya call a spade a spade and did not sugar-coat a few tough days,hats off to ya.I love fishing Lake P but right now and for the next few months(barring a Tropical Storm to send in some salty water)the best bets for me and my fishing Mafia(duck Mafia once teal season gets her very shortly)would be down South towards your area or possibly Hopedale along the Long Rocks.Hope ya get on some nice fish pronto-used to be able to take clients on guided fishing trips and I used some of the best soft-plastic fishing guides in SE LA and ya know ya fishing is tough when even live bait aint enticing dem fine fish!!!Thanks for being honest and NOT trying to hustle customers!!!