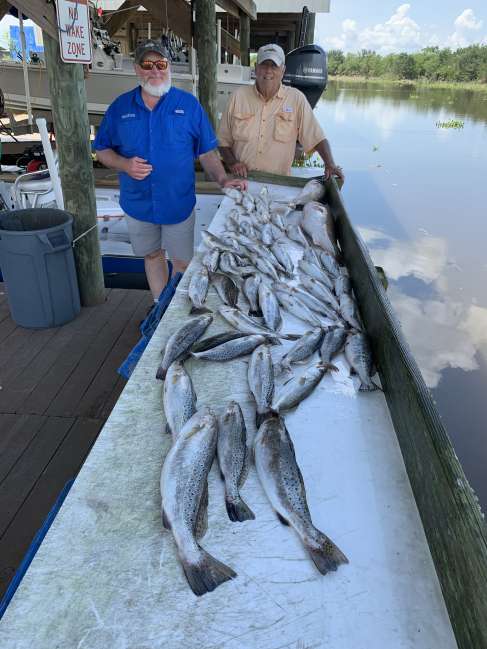 After multiple rescheduled trips over the last week of non stop never ending rain, we finally got a break in the weather. It was nice to have good customers Art Costly and crew back with me on the Blue Wave Boats the last two days. Day one was a grind covering lots of water. Day two was much better as the trout decided to bite. We even had a couple drag pulling reds join the party. Double rigged Matrix Shad and the TKO Shrimp Creole shrimp under a Four Horsemen Tackle cork produced all of our fish. Thanks guys for the continued business over all these years.

Long time friend Mark Charpentier and his buddy Lance joined me on the Blue Wave Boats. Trout was the target species. We put over 90 miles on the BW searching high and low. We could have sunk the boat early every cast with 6-8 inch specks as they are plentiful, but keepers were hard to find. Great time with these guys as it was all about relaxing and being on the water.

H_Johnson
I WISH YOU WOULD TELL US WARE YOU LAUNCH FROM IN FUTURE REPORTS. THANKS!
Reply

Capt. Marty LaCoste - Absolute Fishing Charters
I only fish in Dularge!! Launch from my camp everyday I fish!!
Reply