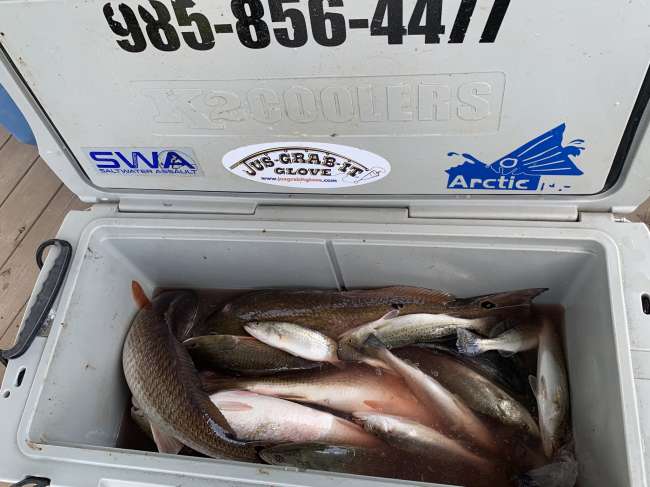 Keith Lirette with LCR and crew joined me on the Blue Wave Boats. We focused on reds most of the morning finding a slow bite in the holes. We decided to go look for trout around 11:30. We picked away at some on the TKO Shrimp from Matrix Shad under the Four Horsemen Tackle corks, before shutting it down at 1:30 in the 100 degree heat!!! Fun time by all, these guys were a blast to fish with. Thanks Guys.

Jacob Descant and crew jumped onboard the Blue Wave Boats with me. Trout was requested so we focused on trout all day. We found shrimp jumping early in the morning, but all trout were undersized except for a couple. The hunt began as we covered some water. We found multiple schools of 8-10 inch trout with shrimp and birds diving, but no keepers. We went around the world and back, then picked away a some keepers. All fish caught on shrimp creole TKO Matrix Shad under Four Horsemen Tackle corks. It was a great time with these guys and gals even though the bite was slow, thanks again.

Barry Aucoin and family joined me for a relaxing morning of fishing. We focused on redfish all morning. It was a slow morning, we the tide never moved more then a quarter of a foot. Even though the tide barley moved, they got their share of drag pulling drum and reds. When the tide completely quit moving and the bite went to non existent, they threw in the towel and we headed in. Thanks again for a very enjoyable morning.