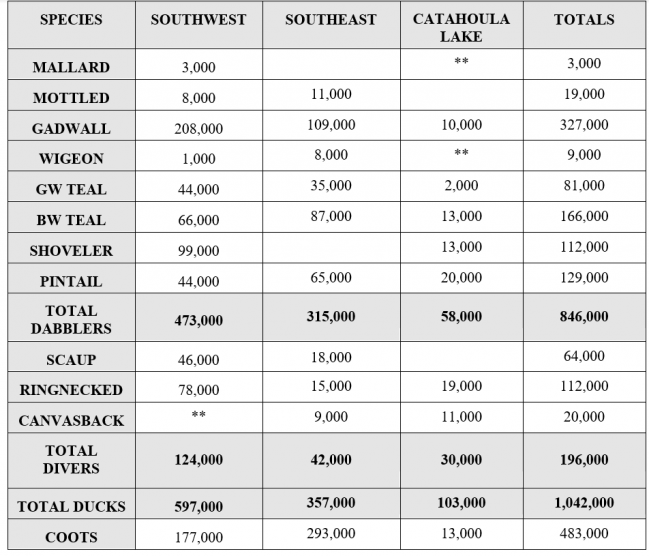 Estimates for all species except mottled ducks were higher than last November in SW LA. However, over the entire surveyed area, all dabbling ducks except shovelers were below long-term averages, and except for blue-winged teal (166,000 vs 183,000), they were less than half LTA. The estimate for coots was 47% below the most recent 10-year average of 906,000 as well. Conversely, all diving duck species were above their long-term November averages. Notable concentrations of ducks in SW LA were mostly gadwall seen on the west side of Rockefeller Refuge, and in the marsh south and east of Calcasieu Lake. In SE LA the largest flocks of mostly blue-winged teal were seen in the marsh north of Pointe a la Hache, and east of Venice.

The 103,000 ducks counted at Catahoula Lake is about the same as the most recent 10-year average, with more diving ducks than normal for November. Water level was about 1 foot below target for opening of the waterfowl season during the survey, and foraging conditions were excellent for dabbling ducks. Moist-soil vegetation was much improved from the September survey, and habitat conditions appear very good if water levels can be maintained within management targets.

Water levels in the coastal marsh were high during this survey and not optimum for foraging ducks in most areas across both SE and SW LA. Submerged aquatic vegetation (SAV) was visible in many areas in SW LA but was highly variable and appeared about average at best. SAV across SE LA was even more variable and abundant in only a few areas. Prolonged flooding in spring and summer inhibited germination and growth of seed-producing annuals, and little was noted during this survey. So overall habitat conditions appear to be only fair at this time in coastal marsh. In the agricultural habitats conditions appear about average with mostly managed water on the landscape and little natural shallow flooding.

Despite early blizzard conditions in the Dakotas and freezing temperatures down into the mid-latitudes, there doesn’t appear to have been a major migratory movement into much of coastal Louisiana. A recent survey in Missouri showed about 25% above average numbers currently on their surveyed areas. There continue to be reports of good concentrations of ducks in a few areas, and a strong cold front the week of November 11 is expected to push more birds into our state.

Another 10,300 ducks were counted on the Northwest Louisiana survey, primarily on the locks, lakes, oxbows, and fields along the Red River and Upper Toledo Bend reservoir. That is 14% below last November’s count of 12,000 but still 47% above the average of 7,000 on this survey since 2005 when surveyed locations were standardized. Gadwall was the most abundant species (4,600) and with mallards (1,500), shovelers (1,400) and green-winged teal (800), accounted for 82% of the ducks counted. The largest numbers were counted on the Red River between Lock 5 and Shreveport, the Lower Cane Unit of Red River NWR, and a managed impoundment near Loggy Bayou. Habitat conditions were much drier than last year at this time, with little flooding in ag fields and pastures. Lake Bistineau was drawn down, 2 other surveyed reservoirs had large expanses of giant salvinia, and some traditionally-managed impoundments were not flooded, but the count was still well above average likely due to early cold weather moving birds into the area.

In Northeast Louisiana, 209,000 ducks and 265,000 geese (13% white-fronted geese) were counted on selected habitats during the traditional cruise survey that was standardized in 2005. That is twice the 104,000 ducks counted last November and 45% higher than the 2005-2018 November average of 144,000. The goose count of 265,000 is nearly 3 times the number of the geese seen last November and almost twice the November average of 139,000 in this survey region. Gadwall was by far the most abundant duck species (129,000) followed by pintails (33,000), green-winged teal (22,000) and shovelers (17,000). The largest concentration of ducks was seen in the flooded fields in the Bunkie/Grand Cote and Bonita/Mer Rouge areas. Those 2 locations accounted for 83% of the ducks and 70% of the geese counted on the entire survey. Other notable concentrations of ducks were seen in flooded fields east of Russell Sage WMA and big flocks of geese were counted in fields east of Hebert. Habitat conditions are drier in NE LA than this time last year, which was extremely wet, but appear about average for this time of year. Some traditionally flooded ag habitats on the survey have not yet been pumped up, and flooding in the backwaters of riverine systems is mostly lacking, but we expect those habitats to improve as the season progresses. Like in NW LA, above-average duck and goose counts in this surveyed region are almost certainly due the strong early cold fronts.
Reply

Mandevillian
Re: Updated Aerial Duck Survey 11/22/2019
Not looking that stellar and hard to believe zero mallards and zero spoonies in SE area,have learned to take aerial surveys with grain of salt and realize that this is shaping up to be our third sub-par duck season and gotta be plenty of explanations forth-coming.Personally have seen incredible habitat conditions in two specific sections of SE LA,hard to fathom habitat degradation or poor habitat,at least where I choose to hunt!!!That is NOT the reason SE LA continues to have horrible duck seasons and guess I am gonna be doing lot more fishing and when duck hunting,better get used to what duck hunters everywhere hate,MT Skies!!!After digesting data like this,not too bummed dat I will miss E Zone Opener and only hope to at least see a few ducks Sun.Guess I will be spending plenty time fishing/deer hunting and hoping for better than MT Skies,sad,sad,sad indeed!!!

speckle_searcher
Re: Updated Aerial Duck Survey 11/22/2019
mandevillian--- made a hunt Sat. 2 hoods still no ducks 3 hunts so far 2 man blind 10 ducks , last year at this time we had 78 duck this is by far the worst year in my life time I am 70 start hunting when I was 10 , not shore if they or late in coming down or is just the way it will b hope day come down later still we lost all this hunting time so far . Good luck
Reply

mulletsquisher
Re: Updated Aerial Duck Survey 11/22/2019
Delta, Thanks for the update, been smoke pole hunting this week in Alabama ( 1 Doe), gave the ducks a break this week but reports I've been getting I believe are representative of what the survey shows no major migration yet, I'll hit the lease Wednesday
Reply