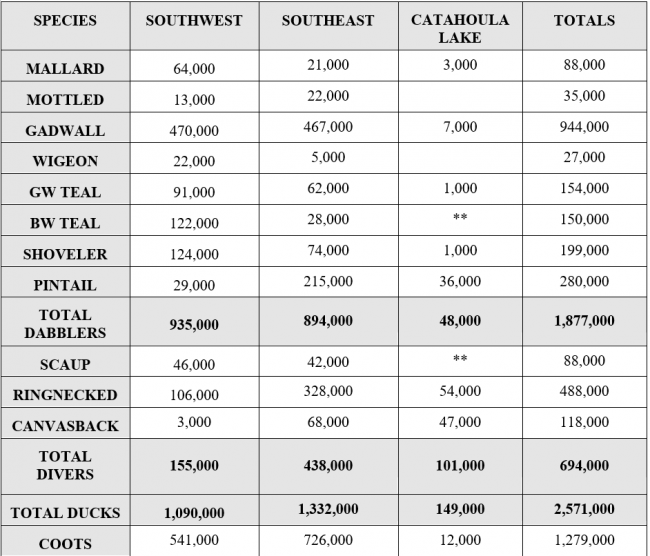 The 2.57 million ducks on this survey is 2.5 times the November estimate of 1.04 million, 32% higher than last December’s estimate of 1.94 million, but is still 8% below the long-term December average of 2.81 million. The long-term trend in December estimates is depicted in Figure 1, and locations of the 27 transects flown since 1969, 17 in SW LA and 10 in SE LA, are shown in Figure 2. The total from this survey is the same as the most recent 10-year average.

Estimates for all species except blue-winged teal were higher than in November. Most notable increases were for gadwall (327,000 to 944,000), ring-necked ducks (112,000 to 488,000), and mallards (3,000 to 88,000). For gadwall and ring-necked ducks, those increases were most pronounced in the SE LA survey region. Indeed, the total estimate in SE LA increased from 357,000 to 1.33 million compared to the November survey, while the estimate for SW LA only increased from 597,00 to 1.09 million. That was largely due to changes in estimates for gadwalls and ring-necks in the southeast region. Across the entire surveyed area, all diving duck species were above long-term December averages, as were gadwall, blue-winged teal, and shovelers. Green-winged teal, however, were substantially below their long-term average (154,000 vs 459,000) for December. It was the lowest estimate for this species since 1985 and the second lowest ever.

The distribution of ducks across the surveyed area was extremely clumped. There were a few very large concentrations with broad expanses of very few ducks. The most extreme example was in SE LA where large numbers of ring-necked ducks were counted in the fresh marsh of upper Terrebonne Parish SSE of Amelia, then very few ducks were counted on the next 4 transect lines and the line just south of New Orleans for monitoring the Caernarvon freshwater diversion. Then another tremendous concentration of mostly gadwalls, pintails, and ring-necked ducks was encountered from the West Bay sediment diversion on the west side of the Mississippi River north to past Venice on the east side. Those 2 locations accounted for about 80% of the estimate from the entire SE LA survey region. Much less extreme, in SW LA large concentrations were seen on the East Cove unit of Cameron Prairie NWR and in the marsh between Little Pecan Lake and Grand Lake. Other large concentrations of mixed species were noted off transect lines, (so not included in the survey estimates), on the open water of southeast Grand Lake and both northeast and northwest portions of White Lake.

The 149,000 ducks counted at Catahoula Lake is 45% higher than in November and 5% above the most recent 10-year average. Water level remains at management target, and foraging conditions are very good for both dabbling and diving ducks across the lake. Canvasbacks and ring-necked ducks were counted across the open water of the center to east side of the lake, while pintails were using shallow flats further north and east.

Since the survey in early November, water levels in the coastal marsh have declined markedly in SW LA and are likely better for foraging dabbling ducks in many areas. Better visibility of submerged aquatics (SAV) confirmed November’s observation of highly variable distribution and less than average abundance of SAV. Without good seed-producing annual vegetation, which was precluded by prolonged spring and summer flooding, large-scale habitat conditions are expected to be only fair. There is abundant managed water in the agricultural region of the surveyed area, but little additional shallow flooding. A little more than half of SW and all of SE LA were flown after the strong frontal passage earlier this week, and associated north winds resulted in very low water levels in tidal areas of the surveyed region. Broad areas, especially in SE Louisiana were mostly mudflat which likely influenced distribution of ducks, and also showed the spotty distribution of SAV. However, despite spotty and suspected below-average SAV, estimates for both gadwalls and coots, species closely related to submerged aquatic vegetation, exceed long-term December averages of 906,000 and 1,210,000 respectively.

There have been a number of cold fronts since the November survey, and clearly more birds have migrated into the state, albeit in numbers similar to the most recent 10-year average but below the long-term average. Earlier surveys in AR and MS were average to below average, while recent surveys in IL and MO suggest peak abundance has already moved through those states. We are anticipating results from December surveys from our neighboring states.

Another 13,300 ducks were counted on the Northwest Louisiana survey, primarily on the locks, lakes, oxbows, and fields along the Red River and Upper Toledo Bend reservoir. That is 30% more than November’s count of 10,300 and 27% above the December average for this survey, but still 31% below last December’s count of 19,300. Gadwall was the most abundant species (5,300) and with mallards (1,700), ring-necked ducks (1,400), canvasbacks (1,200) and shovelers (1,100), accounted for 80% of the ducks counted. The largest numbers were counted on the Red River between Lock 4 and Lock 5, the Lower Cane Unit of Red River NWR, and on Grand Bayou Lake. Habitat conditions continue to be relatively dry with little recent rainfall and only a few ag fields holding water. Lakes Wallace and Bistineau are drawn down, and Wallace and 2 other surveyed reservoirs have expanses of giant salvinia. Some traditionally-managed impoundments are still not flooded, and water levels at Bayou Pierre WMA have fallen after being pumped earlier this fall. However, the count remains above the long-term average likely due to successive cold fronts moving birds into the area.

The survey in northeast Louisiana was not completed during the short window provided by just a 5-day split in the East Zone waterfowl season. Bad weather at both the onset and end of that 5-day period, and lower availability of observers compromised our opportunity to finish the survey. Seven of 30 surveyed areas in this survey region were not flown, including 2 with typically high duck and goose counts. One stark difference between November and December was noted in the Bunkie/Grand Cote survey area, which had the highest duck and goose counts on the November survey. Ducks declined from 107,000 in November to only 20,000 on this survey, and geese from 80,000 to 33,000. Flooded habitat appears the same, but we saw a big decline in the number of birds using those habitats. Conversely, duck counts East of Hebert increased from 6,000 in November to 16,000 on this survey. Unfortunately, without a completed survey, comparisons are limited.

Lastly, in December and January, LDWF conducts a scaup survey on Lakes Maurepas, Pontchartrain, and Borgne. An estimated 179,000 scaup were seen on this survey including 8,500 and 170,500 on Lakes Borgne and Pontchartrain, respectively. That is 34% higher than last December’s estimate of 134,000, 67% higher than the most recent 5-year average of 107,000, and very near the long-term average of 187,000 in December.
Reply

Mandevillian
Re: December 2019 Waterfowl Aerial Survey
Better target scaup,not many greys where we hunt.Gonna HAVE to alter my strategy and target woodies and they are much more reliably found vs other species of ducks that USED to frequent the ridiculously-thickly vegetated ponds,at least where I hunt.Don't think anyone flies the Big Branch Marsh and if they do,be surprised if they report anything BUT scaup,not exactly what I routinely target-guess I can use an ole recipe-take scaup-put it on cedar plank,eat plank toss scaup!!!

Proud Pop
Re: December 2019 Waterfowl Aerial Survey
We will see again what everyone sees this weekend with the opening of the second split of the coastal zone. I hope to get to Delacroix before dark tomorrow to make a scouting run. Will send a report of why I see.
Reply

Steelsprayer
Re: December 2019 Waterfowl Aerial Survey
Wind and rain forecasted for this weekend. Hoping the ducks try to get in the blinds. Good hunting to all.
Reply

Mandevillian
Re: December 2019 Waterfowl Aerial Survey
Proud Pop,Like you,I learned a long time ago to NOT put too much faith in aerial surveys and will likewise not put too much faith in this survey and probably NOT venturing out this week end with constant downpours predicted coupled with ridiculous lack of ducks,at least where we have been hunting.Do know of few sweet spots in Delacroix,hope and pray yours is one,and for my future hunts,best bet gonna be hitting woods where ponds might have reliable wood ducks on them vs MT Skies pretty much everywhere else.Did check out rates for outta town outfitters and one in Enid,Oklahoma seemed very reasonable!!Hope yall do extremely well this week end hope definitely springs eternal and still planning a Venice trip,hoping to nab wall-hanging pintail!!Good luck and hope and pray dat greys dominate yall's straps vs bunch of scaup!!!

the dredger
Re: December 2019 Waterfowl Aerial Survey
not sure about the survey but but i will say this . went touch up blinds yesterday and we have more greys on our lease and surrounding leases than i have seen in years!!! and we had a really good first split also . looks like we will be shooting in the rain saterday morning .. stay safe and happy hunting
Reply 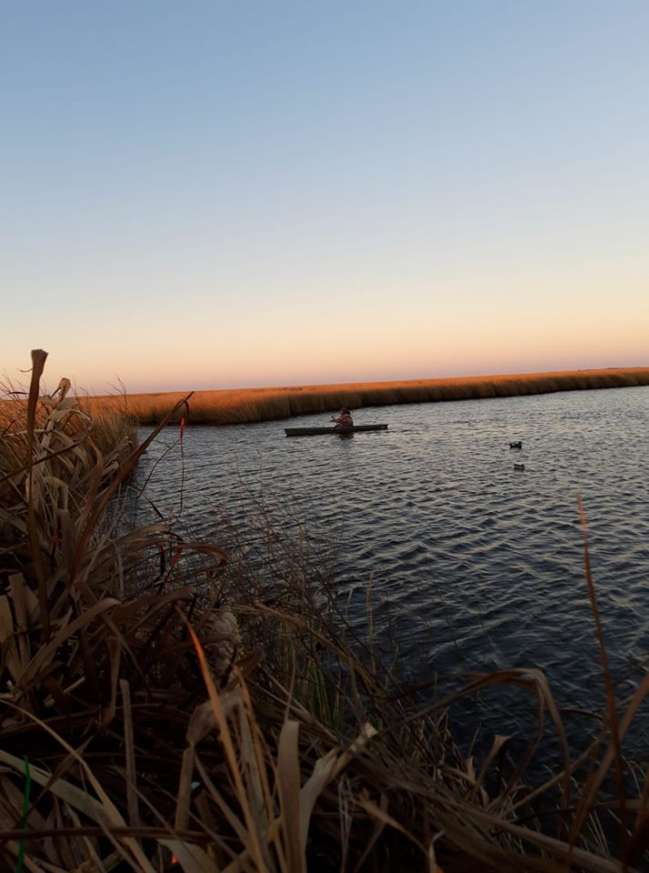 went check lease yesterday in g. m. still no duck. hope they or close by and we have a better 2nd half .
Reply

Delta Duckman
Re: December 2019 Waterfowl Aerial Survey
The way I look at it even if its estimating 2.5 million ducks compared to 1 million sounds good to me. I went to my lease last weekend and did not see any more ducks than before. But, that doesn't mean ducks aren't other places and when boats move around that will shake things up. We will be out there to see how it goes?
Reply

Mandevillian
Re: December 2019 Waterfowl Aerial Survey
Just a check of replies and sounds like greys in some areas and have No-Fly zones where Bayoubob and I been hunting,gonna try change of venue possibly rest of this sub-par,horrendous season and salvage something from it.For those so inclined to target buffleheads,coots,scaup and possibly some canvasbacks and whistlers,Lady P might be about as good as gonna get,free,free,free and 7 days/week!!!

chocohead
Re: December 2019 Waterfowl Aerial Survey
These survey numbers mean nothing to me. It is a best guess average for one stretch of land, then copied to the areas between the next transect line. I do realize that if the counting/estimating is done the same each and every time, then higher numbers will mean just that, regardless of how exact those number are. But the way i understand it, some of these numbers are being applied to areas between transect lines where there is no waterfowl habitat. Someone please correct me if I am wrong. I would like to know what the +- ratio is to counted vs actual. It almost has to be a very large difference.
Reply

LOUISIANA MARSH GUIDE SERVICE
Re: December 2019 Waterfowl Aerial Survey
Regardless of what the survey says we kill more ducks in Delacroix in November than any other month. Period.
Reply

concretecracks
Re: December 2019 Waterfowl Aerial Survey
I think they counted my decoys. Explains the large Mallard count in the Southeast.
Reply

mulletsquisher
Re: December 2019 Waterfowl Aerial Survey
After the second split opening the report for our area matches what Larry put in this report, Down the river shot birds, 4 NOLA lines flown very few birds. hopefully they spread out a bit if not I see more Deer Hunting in my future
Reply