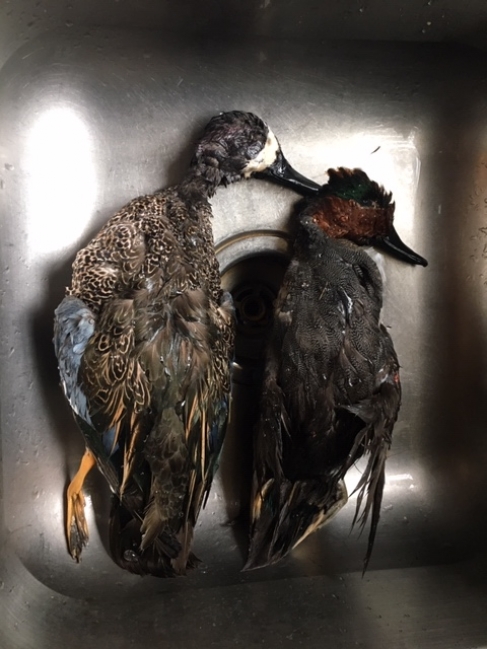 EZone bout to wrap up and had an inclination dat a few teal and possibly few big ducks might be hanging round the same general area de Nuck and Futz Duo hunted last Sat and made a nice solo hunt this am,found water predictably low but knew dat levels would be rising with E portion of ENE winds and got set up after longer-than-typical paddle in(water levels dictated leaving SouthFork good bit N of where we usually dock her)and shoulda known dat I was in for it as nothing but shorebirds seemed to want to light in my pond and guess I was asleep at de wheel as two big ducks suddenly materialized dead-to-rights and I was not on track as by the time I raised de ole Beretta to blast away,dey heard blind rustling from barrel(my bad)and I did NOT blast away,letting two fine ducks escape!!!Next few ducks singed me and finally found de mark on fine drake green wing(when I went to clean him,looks like he got hit with EVERY pellet!!)Not too long after had four blue wings show up took closest one and missed de mark on first blast rocked him on second and he was high up and did helicopter move,indicative of head shot and I quickly retrieved him and did have few more chances but could NOT convince huge flock of greys to commit and was running short on time so I headed back,two fine teal in tow and were it not for the Law of Gravity,not sure my BB's woulda hit de water,unfortunately.Hate horrendous shooting days and today was about my worst in long time.Woulda,coulda,shoulda had my six and did have pair of mottled ducks about seal de deal but dey some educated ducks,PhD in duckology!!!Got one more EZone hunt in de ole body and want to take Wifey to Trestles this Sunday and Dave Raggio,AJ Fishes Trestles fishing podna,told Wifey we may see them out there this Sunday and should be decent trip to dem Tracks!!!

Mandevillian
Thanks,Going to Arkansas Mon-Wed and GB3 said the hunting has somewhat tailed off but there are plenty of geese to be shot out there.Believe it or not,I had more than AMPLE chances to cash in on some big ducks,just my horrendous shooting doomed me big-time!!Bayoubob and I hope a few dem ducks still hanging round and he did hunt Texas recently and got trophy pair of pintails going on de wall,thanks!!

Proud Pop
Hey Bud, I love to see those beautiful pintails. Is the limit just one in Texas also?
Reply

Mandevillian
Proud Pop,Sure wish the Feds would up the mottled duck limit up to two-often it is hard to pick out mottled ducks from mallard hens(short of ground-checking em)and on one memorable Big Branch solo hunt(when we had decent flocks of mottled ducks and mallards)I had a pair of mallard hens coming right at me-little chance of missing either and I dropped the unlucky one on my left and upon ground checking,was big ole mallard hen,pretty sure the other was mallard hen and I did the RIGHT thing only taking one shot and one duck.Had I had another hunter with me OR ID'd the hens as they were coming right at me(could not see speculum),woulda had pair of fat mallard hens!!!Bet Texas has same restrictions on pintails and mottled/black ducks.

BPitman86
Yes just one we had 12 of us hunting
Reply 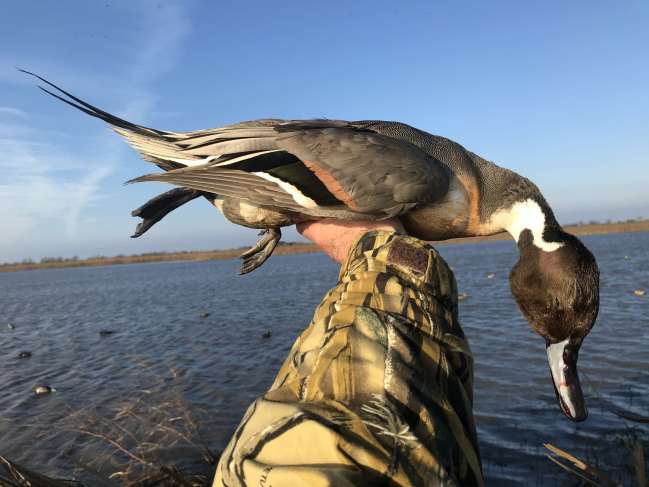 Proud Pop, here is the drake taken in Texas back in December that Mandevillian was referring to. Got the hen on day 1 and the drake on day 2. Do not have picture of the hen, but will try to post one of the pair when I get them back from the taxidermist.
Reply

bayoubob
Taxidermy by Kevin Hynes in Pearl River, LA. He is a former world champion, check out his website. He actually has a picture of a pintail and widgeon dead mount in his customer gallery that you may be interested in.
Reply

Mandevillian
Second dat suggestion-Kevin Hynes did exceptional job on black duck I shot a few years back and John Manion wrote the article-ya aint gonna believe the folks asking me WHERE I shot dat trophy and my standard reply was 'in de head!' Hope Bayoubob and I nab some green in SE Arkansas,though neither of us needs one dem for de wall-I have killed a few drake pintails locally,none with sprig and folks say dat can be added but not gonna mount one til I get mature specimen!!

LOUISIANA MARSH GUIDE SERVICE
Hey Mandevillian. You won't shoot scaup or spoonbills but will shoot mottled ducks!? They are truly bottom of the barrel. Most of the ones we got this season had their throat full of minnows!
I have never shot a scaup that had minnows.
By the way just made a 3 day Arkansas hunt. 4 hunters got 3 ducks the whole trip. The grass isn't always greener.
Reply

Mandevillian
Mike,Sorry to hear ya got minners in ya mottled ducks-in 20 plus years of duck hunting,I have had guys tell me they find minnows in mallards/mottled ducks and guess dey de unlucky ones as I have YET to find a single minnow in any mottled duck or mallard.They are predominantly grass eaters,guess it is POSSIBLE but like I said,have YET to find single minnow in ANY mallard/mottled duck.Guess ya season in Delly about as sorry as lotta folks,sorry to hear dat and to the credit of GB3,he has admitted that their last four-five hunts stinkeroos-he calls a spade a spade and I about REFUSE to target scaup,think I would stay home if all dats flying is scaup,sorry!!!By the way,my degree is in Biological Sciences and do know a buddy from the Abita KC's with a similar degree and he knows ducks and their dietary behaviors like NO ONE else I know-will chat with him and pick his brain-where I hunt the grass is incredibly thick and mallards/mottled ducks would not have to resort to chowing on dem 'minners'!!!Have a great season next year!!

LOUISIANA MARSH GUIDE SERVICE
Mandevillian . The first split in Delacroix was generally good for us. After January 1 it was all downhill. As far as I'm concerned set the season for us November 1- December 30.
Over the last 53 years I've been hunting I've gotten more ducks in November than ANY other time of the season.
By the time January gets here the pressure put on the birds is is unreal. Not only hunting pressure but the extremely low tides and the hundreds of fishing boats riding thru the marsh and bow fishermen at night that prowl thru duck ponds harassing what few birds are left. I would say about 90 percent of the gadwall are pushed out to the outside waters in grass filled bays and lakes. Take a ride in January to Lake Campo, American Bay , etc and witness the thousands of gadwall rafting there. The best scenario for late season Delacroix hunting is a good south or southeast wind. Forget a north wind!
Reply

Mandevillian
Least ya had good first split-we on the NShore have had horrendous seasons past handful and it stings as we have MORE than adequate vegetation to keep ducks well-fed and fortunately for us do not have issues with folks fishing in same general areas we typically hunt and all ya gotta do is take a look at how we hunt and not a surprise dat folks do not try fishing in areas we camped out in chasing very few ducks!!!I take great pains to get away from just about 99.9% of folks and with just a tad better shooting,luck,etc,MIGHT have had no more than 3 full solo limit hunts,horrible,horrible,more than horrible and Bayoubob and I overly enthused as GB3 been in very close contact,starting to shoot fair numbers of quality ducks and bonus geese.Heading up there early this afternoon and can't wait to get a nice change of scenery.For those willing to bust it,LA did have SOME sweet spots but only a few of them!!!Ya know we addicted to fowl when we already talking bout Teal Season 2020!!!Got plenty of nice spots to scope out,areas that we recently discovered this past season!!!

Mandevillian
After hitting totally different type of hunting and in another state,might be time for de Nuck and Futz Duo to plunk down de coin for full-season non-resident Arkansas small game licenses-the doggone ducks and geese were that prevalent in Lake Village,problem was that hunter fatique led to lotta hunters vacating Lake Village(HUGE MISTAKE)and it led to a serious lack of much-needed hunting pressure to assist de Big and Al and Nuck and Futz crew!!!GB3 has incredible situation,so nice dat there is monster guiding operation dat he jokingly calls de 'Duck Church' and one could readily tell dis one huge operation.He and Al out there as I type this and due to unfortunate mechanical snafu with Argo,dey had to resort to Plan B,yet another fine azz pit blind and GB3 texted me pics of bag so far,two green wings and just yesterday,we jumped thousands of ducks and even more geese!!!Hard to believe just that much distance separates MT Skies from Clouds of Ducks/Geese!!!Only 4.5 hr drive from our homes!!!Big and Al,bust dey azzez up there,teach dem ducks valuable lessons!