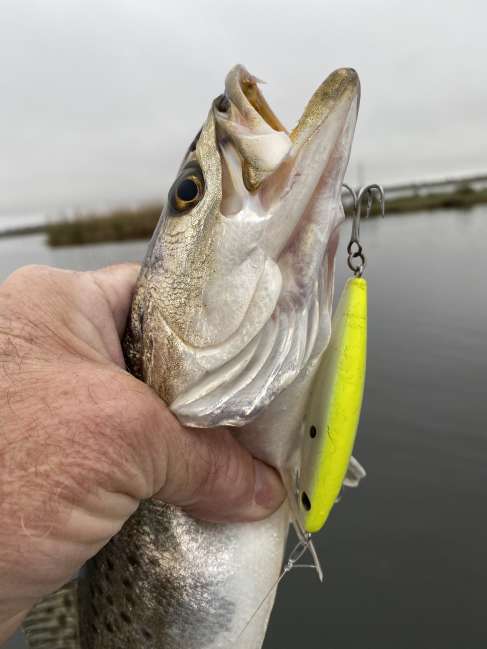 Went out this morning knowing that it was probably gonna be a terrible day but went anyway, water was high , falling lite SE winds headed to a spot that was good before, trout were scattered over the shallow flats I was fishing, using a twitch bait I managed to pull 19 trout out keeping 7 for supper tomorrow night and releasing the rest to fight another day, I picked up 4 bass that were full of eggs released them as well 🧙‍♂️🎣
Reply

Mandevillian
Re: Don’t need no stinking bait!!
Wiz,Nice trip as usual and hope ya saw de disturbing news bout the Menhaden(pogy)boats raping our coast and killing untold tons of reds,specks,black drum,whatever dey toss overboard.Ya can bet I will have copies of Sportfishingmag.com article for LAWLF to read,in fact they no doubt have advance warning but so be it,commercial,out-of-state menhaden boats ruining our breeding stocks of reds,when is dat gonna stop!!!

CCAguns
Re: Don’t need no stinking bait!!
I experienced that in the West Bay area (WD 55) back in the 80's. Used to fish with old Bill Schilling, the jeweler, who currently fishes in those Happy Fishing Grounds in the clouds (God bless him). We'd run down Tiger Pass and out into West Bay, fishing about fifteen feet of water. Bill and I fished almost every Thursday and Sunday (me every other week as I worked 7 on 7 off) and we used to average 3-1/2 pound specks with many running over 7 pounds. On one trip, Bill caught an eleven pounder and three 10 pounders were caught that day. You haven't lived til you've watched a trout that big swim away unharmed. Around 1987, the fishing came to an abrupt halt in that West Bay area. Instead of catching 60-70 trout per day, we worked for twenty. The big Menhaden boats moved it, scattered their net, recollected it and off they\'d go. Trailing behind them was a floating mass of small, dead fish, 100 yards wide and as far as you could see. Redfish, trout, flounder, croakers - you name it were in the dead mass, obviously too small to keep on board. That shXX ought to be illegal. It takes only a few hauls in one area to devoid that area of any future!!!
Reply

ajfishes
Re: Don’t need no stinking bait!!
Nice catch we was in your area Sunday morning in between that rain. Fish were very spread out still guess it’s a little early still. If I remember last year we did better in March in there
Reply