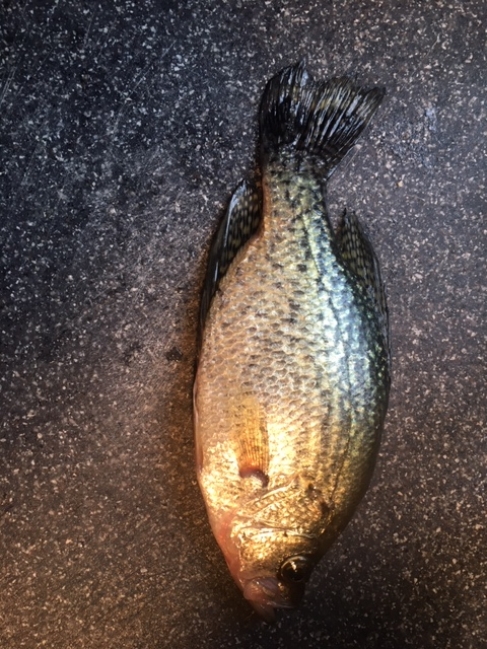 Not the least interested in fighting crowds at Mardi Gras,so me and Medicare Client(also fellow Abita KC Member)and I decided to see if dem fine and fat T-Funky slabs might make their presence known and we were the second boater launched this am at 4th St Launch.Water did not look too bad and I tried some fine Lunker City Fin-S fish(2.5 inch versions)and some very fine Lunker City grubsters(2.75 inch versions)and I added Crappie Psychic trailers in chartreuse and added glitter Crappie Nibbles but none of my presentations enticed a doggone fish to bite,sorry Me-Quan,no Gou's were caught and they are NEVER caught with lures as fine as Lunker City makes,maybe if ya use some dem local lures ya might entice a Gou to hit em!!!My fishing buddy started out with 5 wt fly rod and a hand-tied wooly bugger and he nabbed a fine slab dat I netted for him and I did manage to have what was most likely a nice bass slip worm,hate when dat happens.We chatted with bunch of fishers and none had more than a few fish,did see gent deep-jigging our first spot and he nabbed at least 2 nice slabs.Difficult to deep-jig without getting snagged way too many times!!!I got bored with lack of sac a lait action and we hit bunch of spots that HAVE produced some mighty-fine slabs but not today!!!Probably gonna seek some saltier fish next week,depending upon which day(s)look the most promising.The T-Funky needs to clear a tad but at least a few folks took home some slabs today!!!

GB3
Re: Happy Mardi Gras 2020 Solo T Funky Slab 2 25 2020
Sounds like you gave it a good shot Mande! If they didn’t bite all those goodies you presented, water must not be quiet ready to produce a nice box of slabs yet. I’m hoping to make my first trip of the year on the T-Funcky next week. Still putting up decoys, waders and cleaning Super Black Eagle II from duck season. Ready to get the Alumaweld 2072 ready to hit the river!
Reply

Mandevillian
Re: Happy Mardi Gras 2020 Solo T Funky Slab 2 25 2020
GB3,Think deep-jigging is de ticket,though I HATE prospect of losing bunch of dem fine Lunker City jigheads and De Wiz sent me a nice link showing a gent making weedguards on lead jigheads that are way less pricey than the Lunker City jigheads.Might make a few and post pics on this site as I have fly-tying vise and plenty of materials to fashion weed guards out of.The video showed gent using 60 lb mono for weedguards and he also fashioned anchor point for jigheads and all he did was bend the 60 lb mono into neat anchor point.The Lunker City jigheads are second to NONE with respect to anchor point system!!!Yep,time for T-Funky slabs!!!