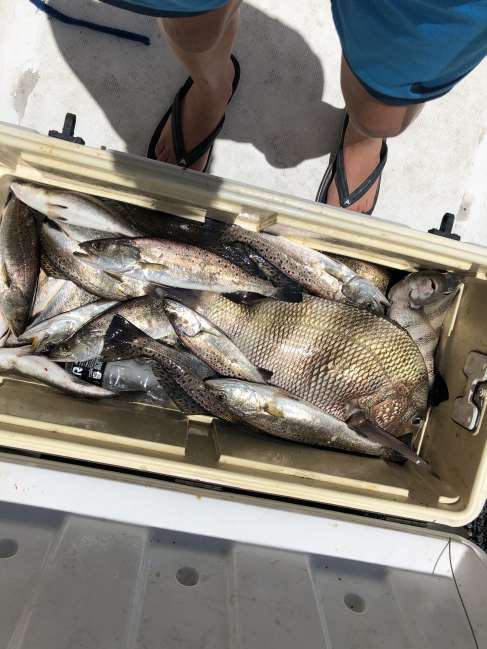 My boy and I loaded up this morning 6/5. Just shy of a 2 man limit of trout and my son’s biggest sheep head to date. The marina was not as crowded as I was expecting so headed straight to long rocks. Since typical crowd wasn’t there we had stretches of rocks able to troll along. Picking off a fish here and there using rattle shrimp under cork. After an hour we never found them stacked up so headed to Bay Eloi. Hit a couple spots only finding throwbacks. 3rd stop and every other cast we were putting fish on ice using a mix of live shrimp and rattle shrimp. They didn’t want anything to do with any other plastic I had. Anyway by 11:30 wind picked up so bad anchor wouldn’t hold so left them biting and called it a day
Reply

Mandevillian
Re: Hopedale Trout
Awesome job,have used rattle shrimp and they definitely work-wind got me on Lady P today,getting ready to pen brief report and gonna show CCAguns a spot or two on local deer club tomorrow,might get back out after some bass and possibly reds Sun,weather and winds permitting!!

Bluewave007
Re: Hopedale Trout
Fished hopedale Friday. Rock damn was slow for trout but strong on sheephead and reds. The inner marsh water was clear but few fish.
The specs are hiding again. Hope storm shakes them loose.
Reply

LastCast
Re: Hopedale Trout
Mandevillian - As of late I've been using mostly Matrix soft plastics specifically in Holy Joly with great success. But on days like yesterday, I couldn't get a hit on it or an assortment of other soft plastics I tried. I also tried several hard baits like catch 2000, rapala rip shad and an H20 twitch bait with 0 hits. I had forgotten I still had several Berkley Rattle Shriimp. As soon as I started throwing it what as if the light was turned on. I will say this about the Rattle Shrimp, I hate the hooks they come on. I personally think they are too small I can never get a good hook set with them, and for some reason, within a day or two of opening the package without fail they start to rust and before long are worthless. What I do now is take them off the hook it comes with and put the bait onto a 1/8 oz H&H jig head and super glue in place. You loose the rattle chamber that's attached to the original hook it comes with but the fish don't seem to care.

Bluewave007 - I know many people that do well at the dam but for some reason I personally have only ever picked up a few there. I'm still learning Hopedale but think its more of a fall/winter time spot. As far as the inner marsh for speckled trout, its going to be tough to find any there this time of year since they push more to the outside, that's their summertime pattern. We've been doing consistantly well the last month in Bay Eloi. There are trout all over that area. It's a big area and you have to do your homework. There's a ton of throwbacks out there right now but keep moving around and eventually you'll start picking up bigger fish
Reply

Mandevillian
Re: Hopedale Trout
Last Cast,Have ya ever tried Tsunamai shrimp in glow color.Wish I had recorded trip to Long Rocks just about this time a year ago when my fishing buddy(never leaves de dock without min of 100 live shrimp)was tossing fine live shrimp at specks in murky water,I was tossing Tsunamai glow,made a cast tad too far and lost almost my last Tsunamai,reached into tackle box,tied on another and was catching probably 10 times the fish my buddy was catching,think the holographic film in center of Tsunamai did de trick and gearing up to open-pour soft plastics and have heard nothing short of rave reviews of Angling AI 4 inch swim bait and there is an endless number of color combinations,local and even Internet search would not come CLOSE to not only the way this lure looks but works and know a few folks using them,making their own lures and one gent who e-mailed me has been making his own rods(for very nice profit,I might add),his own INCREDIBLY effective swimbaits,lead jigheads and he told me he has NOT bought a lure,rod,jighead in over 7 YEARS!!!Not a thing wrong with dat gent's hobbies and they are about same as mine!!Thanks for tips about Hopedale,gonna get with a few folks dat post on this site an do not only some exploring but tossing some custom gear!!

P.S. Last time we had serious weather event(Katrina)we caught some mighty-fine specks right here in our backyard and my older son and I had perhaps our best-ever duck season,so there certainly is plenty of hope for de local fishing/duck hunting scene and I have fished certain areas with water so clear ya can spot fish from a long ways away and quite possible the spooky fish I recently spotted were NOT puppy drum but sheepshead!!
Reply

Mandevillian
Re: Hopedale Trout
Just watched two AJfishes You Tube videos and he and his buddies caught quite a nice variety of fish,specks,reds,sheephead and seemed like about 90% of the fish they caught came on soft plastics,all Hopedale,some at dam and some at Long Rocks.Not a surprise dat he caught some nice fish,ALL on soft plastics!!

LastCast
Re: Hopedale Trout
Mandevillian - I wasn’t able to fish the rest of that year following Katrina because of work so I can’t really comment on that. However in the late ‘90s when Hurricane George came through it was September and during teal season. My father and I were in Delacroix 2 days before the storm came through. Water was really high and in the marsh that afternoon. We went to our duck ponds less than 10 minute boat ride. Marsh was covered in teal. More than we’d ever seen before or since. I positioned my flatboat in a small cut that separated one of our ponds from a section of flooded marsh thousands of teal were holding in. We sat there in my flatboat in the open watching all these birds fly over head as we caught not only our limits of trout and reds but bass as well. We’d brought our hunting gear and intended on getting into one of our blinds for the evening. We realized we didn’t have to and shot our limit of teal from the boat as we sat. Never experienced anything like it before or since
Reply

Mandevillian
Re: Hopedale Trout
Last Cast,I am reasonably certain the main reason the Big Branch Marsh fared so well that particular duck season had EVERYTHING to do with the devastation Delacroix/Reggio/Hopedale/Venice sustained and the ponds we hunted were devoid of grass but apparently the ducks had very slim pickings and we just happened to be 'right place,right time'.As far as fishing went,the tremendous increase in salinity made brackish marsh much more salty and that actually contributed to vast devastation of aquatic vegetation but I think lotta grass that got up-rooted ended up in the interior of that marsh and is contributing to the tremendous re-growth of current grass,combined with at least possibly 4 Spillway openings,last year's historically-long and protracted Opening really is fueling growth of thick grass.Bait is getting shoved into the Lake with each Spillway Opening and the phosphate load of the Mighty Muddy is like fertilizer to growing vegetable garden.Hope and pray that in next few weeks,Lake gonna have plenty reds and who knows,specks might start showing up in fish boxes,at least there is some history pointing in dat direction!!!May have mentioned this to ya but on one duck hunt about 4-5 years ago,I was so far into interior Marsh that I had small herd of does not that far from me and my decoy spread and Big Branch does allow archery for deer/hogs!!When and IF Arkansas freezes up,nice flocks of greenheads DO show up and funniest story was group of guys I met after a hunt and I heard em and saw em headed my way and was blowing what I call my 'ATT call'-DC Countdown 2.0 in polycarbonate(thanks,Proud Pop,love dat loud call)and one of those fellows said he heard flock of mallards and I told him dat was me blowing my call!!