picknhand
Alrighty folks...I got ourselves booked on GI for a Fathers Day weekend trip with my son and cousin. Got us a single room motel that we will pile into and hopefully get into some fishing action. I’ll be spending the next week or so looking at maps and planning our assault (not really...there is a running joke about our fish-less Father’s Day weekend trips). Anyway; would greatly appreciate any insight on locations, bait, etc, for fishing out of our kayaks and/or surf fishing. Thanks in advance!
Reply

Mandevillian
Re: Grand Isle...here we come
picknhand,Best advice I can give ya(for what it is worth)is to check out the Barataria Pass area and back side of Grand Terre Island(not a far run from Sand Dollar Marina).Wifey and I used to routinely take our 16 by 52 flat,launching at Sand Dollar Marina.Where ya fish is obviously gonna depend upon wind speed and direction and hope and pray for light winds possibly from N or slight S winds and ya should be able to head towards Grand Terre,back side near pump station(told ya was gonna give ya EXACT spots)and very hard to beat Vudu under popping cork,we found specks down there were not exactly liking lotta popping of cork,just cast dem babies as far as ya can,pop cork few times and SLOWLY reel and watch what ought to happen.We are NOT fans of live shrimp,NEVER toss em and I have quite an arsenal of effective swimbaits,lotta soft plastics will work and Berkley Gulp,Swimming Mullet in Chartreuse HARD to beat and been having pretty good results with Lunker City line of lures(can't find em locally,too bad)and Shakers in 3.5-4.5 typically encite quite a riot(know ya gonna get lotta folks swearing by OTHER soft plastics-to each his own-trust me Lunker City Lures deserves at least a shot).For surf fishing,contact Sammie Romano at Chag's in Metairie-bet he even tells ya WHERE to try.I am not a surf fisher but if ya got some MirroDines,toss dem babies and get ready to HANG on-dem sharp treble hooks really dig in and imitating a mullet can't hurt!!!Good luck,used to love my plastic boats and getting Cajun Sleigh ride a neat thrill.Let us know ya do-ya might convince me and Wifey to head back down to GI where we used to crab,fish the passes for specks and reds and enjoy saltier water than what I typically get in Lake P Basin!!!Four Bayous Pass is quite a paddle from Barataria Pass but if ya get right winds and wanna scope out the camps out there,should be plenty specks hanging around the camps,ALWAYS a good spot(s)!!maybe the gent who makes INCREDIBLY EFFECTIVE custom swimbaits will chime in,possibly privately,and get you some custom swimbaits.I am embarking upon fashioning custom swimbaits and MAY have some ready by the time ya headed down.

P.S. Hard to beat the action(head AND tail shake)of Shakers(www.lunkercity.com)!!Get u some and see what I mean!!!
Reply 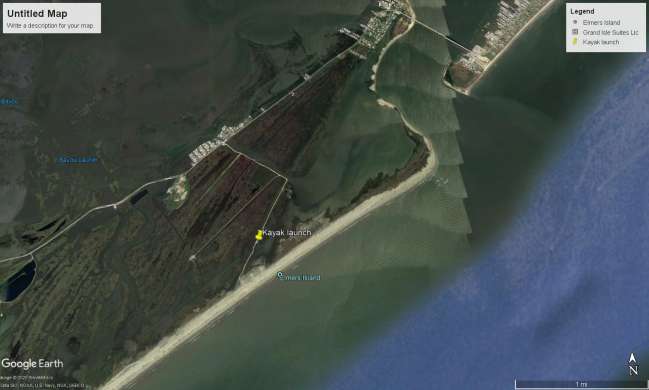 Prior to getting a boat I fished the back side of Elmer's island from a kayak. I marked a good spot to launch if you have not been down there before. I would launch there and head east looking for activity. There was usually some bird activity early in the morning to help give the fish away! Reds and specks are readily available in there. My baits of choice were a bone spook, Vudu shrimp under a cork, mirrodine or some sort of soft plastic. I always found live bait was more of a pain to haul around in a kayak than it was worth. The surf on Elmer's island can be good but you will have a lot more people fishing there than you will on the back side. Good luck and enjoy the weekend!
Reply

Mandevillian
Re: Grand Isle...here we come
picknhand,Wifey and I did see fair number of yak fishermen fishing the relatively new rock jetties just outside the launch at Sand Dollar Marina.We would always book a room at Sand Dollar and tag along bunch of crab nets and even brought a few crab traps and for whatever reason,seemed to catch tons of crabs in the berry stage,guess the saltier water in Gulf attracts more females and in Lake P Basin,males seemed to be vast majority of our catch.Got me wanting to head on back to de Island and hope yall nab some fine specks.One of my most endearing memories was trip many years ago when I had both my sons fishing with me,we were tad E of Barataria Pass,possibly near 4 Bayous Pass,fishing an oyster reef with NO ONE around and I had a huge speck hooked,probably every bit of 3.5 lbs and big shark devoured all but de head and almost tossed head in box to show Wifey and I musta became a fisherman magnet as at least 6 boats showed up about immediately,SOME gave me some casting distance but OTHERS drew my wrath by getting WAY too CLOSE!!!Good luck!!