Mandevillian
After yesterday's trip with older son,had solo trip planned for today and was hoping to redeem self after losing two huge flounders.Launched at Bayou Liberty Marina a tad earlier than yesterday and saw plenty of bait activity at first spot,NADA for my efforts and made my way to the Trestles where there was quite a few folks,saw none catching and did see same Charter guy that I saw yesterday and he asked about how my fishing was going,gave him de thumbs down and I fished quite a bit of dem Trestles,made my way over to I-10 Twin Span after boating 16 in flounder and guess best news,besides chatting with bunch of folks putting a hurting on sheepshead,was spotting two big schools of Jack Crevalles,one school had lone wolf separate from de pack and charge at Lunker City Shaker,good thing I kicked Lew's High Speed reel into high gear as I wanted NO part of dat big ole Jack.Made my way back to awesome grassbeds in about perfect depth of water and spooked bunch of sheepshead and was actually watching one scurry away when big 24 inch red inhaled Jann's Netcraft spinnerbait and he was quite fat and put up great battle and boated him,no too long after nabbed 16.5 inch multi-spotted red and made my way home and grandson waited for Paw Paw to clean quarry-he loves watching me and fat red had huge pogey in bloated belly-wonder what he thought spinnerbait was???Taking sons and grandson on crabbing trip tomorrow and hope to get after more fish.For some reason,I-Phone has yet to send pic of today's catch!!!Bottom line,flounder and bigger red were very nice,16.5 in red a skinny specimen!! 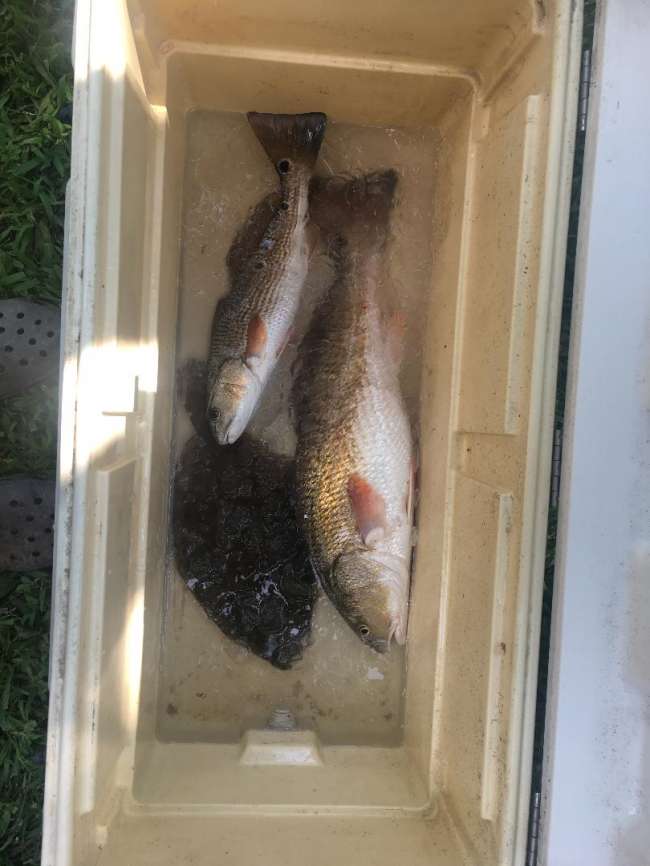 Got situation figured out with respect to saving and e-mailing photos and here is box shot from yesterday!!Reds should be reasonably plentiful in all de NShore grassbeds,water is absolutely pristine in plenty of spots,ya just gotta take de time to find water clarity and bait activity and result should be reds like these and plenty flounders at I-10 bridge and Trestles.